A budget impasse? A tax overhaul? Veto overrides? Many complex issues will be discussed and resolved in a very short amount of time during the special legislative session beginning May 24, 2017. We’ve gathered together and posted here numerous resources to help you makes sense of it all.

Governor Martinez has called on the Legislature to pass a massive tax reform package during the short special session. The tax package she wants is a hold-over from the regular session (HB 412) where it failed in the Senate. What’s in it and how would it impact you? Download this 1-page fact sheet on what the Governor’s tax reform does (pdf) 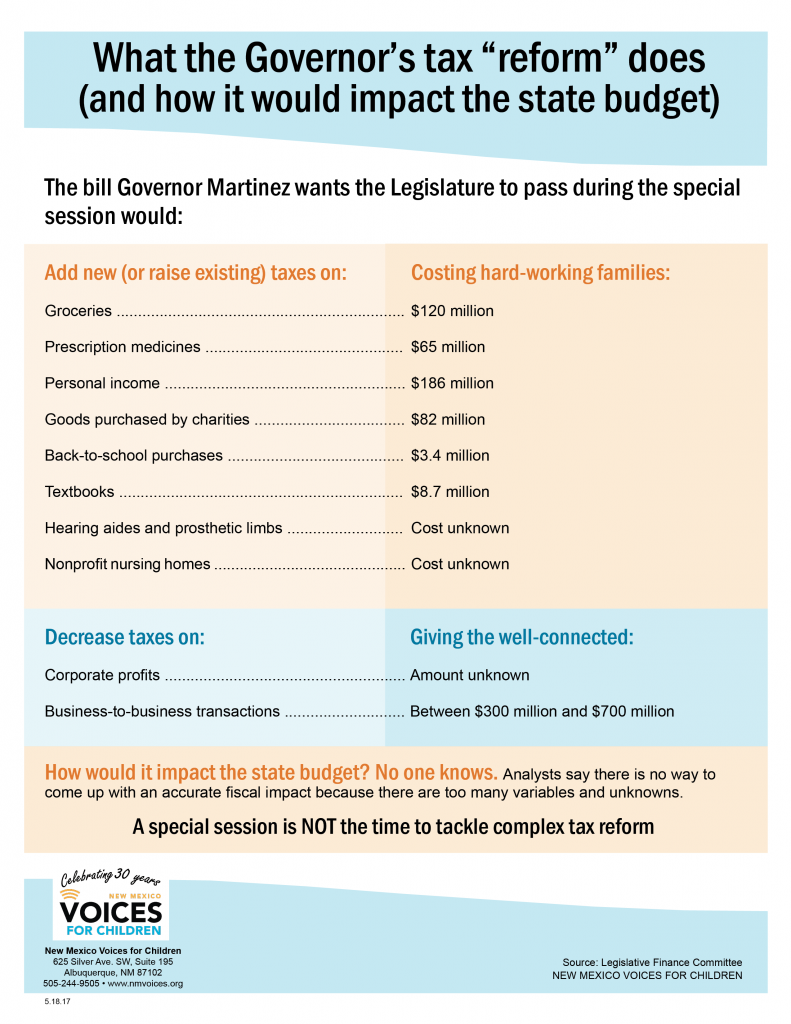 While reform of our state’s tax system–particularly the gross receipts tax that we pay on most goods and services we purchase–is a good idea, there are several aspects of this particular reform that would hurt the state’s lowest-income families and children. Download this infographic on why the Governor’s tax reform is BAD for New Mexico (pdf) 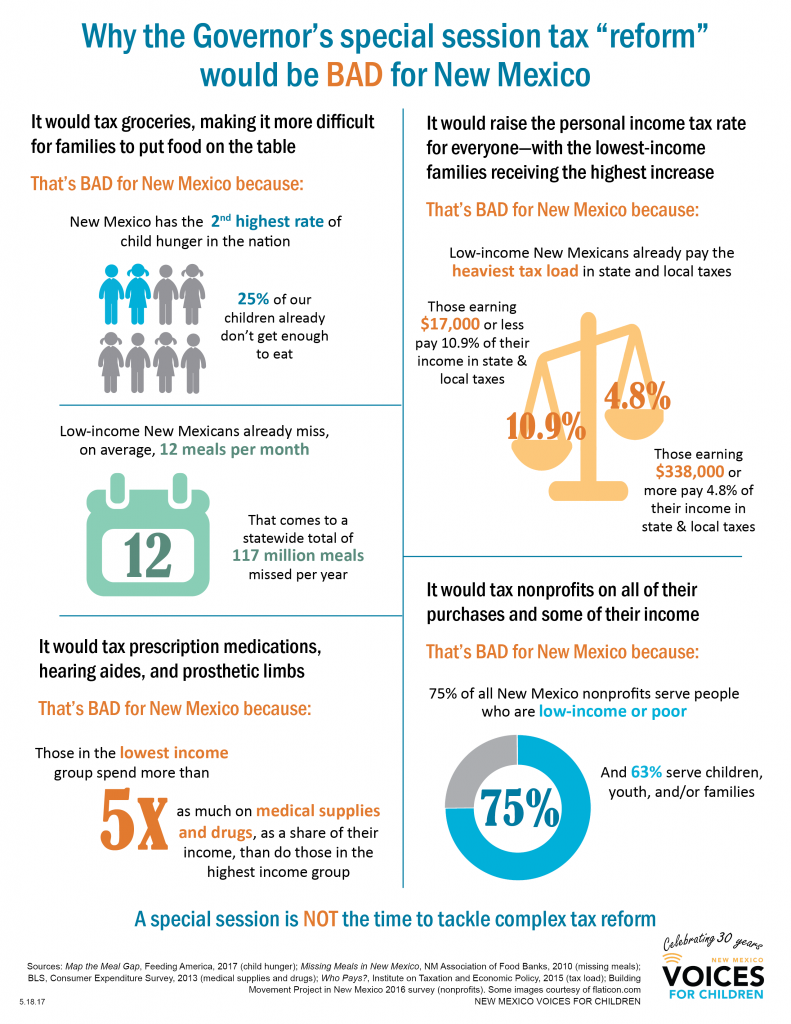 Even without this tax reform, the state’s tax system hits New Mexico’s lowest income earners the hardest. Those in the bottom income group pay more than double what those at the very top pay in state and local taxes as a share of their incomes. This is because low-income households must spend their entire paycheck every month just to get by–and many of the things they spend it on (non-food groceries, clothing, gasoline) are taxed, while those at the middle and top of the income scale can park some of their income in savings and retirement accounts. The graphic below shows exactly how the different kinds of taxes impact different income levels. Download this infographic on the backward state of taxes (pdf)

During the regular session, lawmakers passed a well-thought-out, bipartisan budget, along with a revenue package (HB 202) that would raise the funds necessary to cover the state’s critical services like education, health care, and public safety. But Governor Martinez vetoed it, which threw the state budget out of balance. We’ll be advocating that the Legislature override her veto on that bill or resurrect some of those same provisions in a new revenue package. Download this 1-page fact sheet on the bipartisan revenue package (pdf) 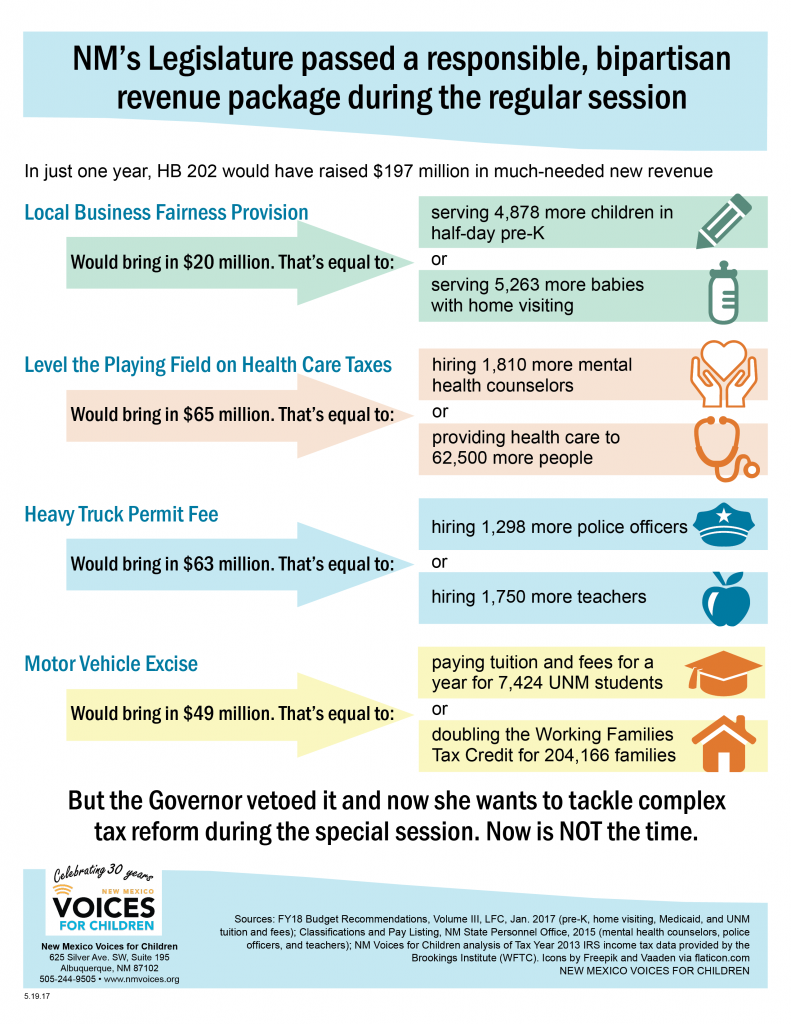 Talk of taxing food is not new and advocates have been educating lawmakers and others about how it could negatively impact New Mexico’s low-income families for years. We have a variety of resources on the issue.

Link to our Food insecurity in New Mexico infographics

Link to our By the Numbers: Hunger and Unemployment infographic 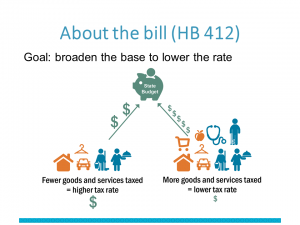 In addition to taxing food, the tax reform bill that was debated during the regular legislative session also did away with some exemptions for New Mexico’s nonprofits. Since nonprofits are crucial for filling gaps in the safety net that our state does not address, increasing their taxes would be counterproductive. Our Fighting the Nonprofit Tax presentation, created for New Mexico Thrives, takes a look at how tax reform might impact nonprofits and offers suggestions for ways that nonprofits can oppose it.


There’s no question that the state’s tax system has problems–it relies too heavily on revenue from oil and natural gas (the prices of which fluctuate wildly), hits the lowest income earners the hardest, and puts local businesses at a competitive disadvantage. So what’s the answer? Our Blueprint for a State in the Red policy brief looks at several changes our legislators could make to the tax system that would make it both more stable and more fair. Download this 4-page policy brief (pdf)