Unless the U.S. Congress acts soon by passing an alternative deficit reduction package, New Mexico will lose more than $41 million in federal funds to state social programs in 2013 and millions more in funds to defense programs. This scenario has been referred to in the news as a ‘fiscal cliff.’ That’s an apt description because such a significant a loss of federal funds would be extremely painful for the state’s already fragile economy.

The Budget Control Act was passed by Congress and signed into law by President Obama in 2011. Commonly known as the BCA, the legislation authorized automatic cuts in federal spending to be made from 2013 to 2021. These cuts are known as sequestration. In New Mexico, great concern has been expressed about sequestration cuts to defense spending, which could range from $150 million to $500 million per year (depending on the source1) due to the military presence and two national labs in our state. However, the potential negative effects of cuts to nondefense programs will also be significant.

Why it’s Important to Look at NonDefense Cuts

Most discussion regarding sequestration in New Mexico has been concentrated on cuts to defense spending. But the focus solely on defense cuts ignores the impacts to state education, health, and employment programs that will be slashed by a total of more than $41 million in 2013 alone.2 Decreased funding will mean both lost jobs and reduced services for New Mexicans. It will mean fewer teachers, decreased job training programs, and less support for those New Mexicans who need it the most. New Mexico already has one of the worst poverty rates in the nation. More than one in five New Mexicans and almost one in three New Mexico children live in poverty.3 Further cuts to education, health, and employment programs will only make this worse.

Decreasing funds to education, health care, and labor services will not only directly harm children, families, and communities that need support, but will also kill jobs and further slow the pace of economic recovery. As a recent study by the Political Economy Research Institute pointed out, investment in domestic social programs such as education and health care will create “significantly greater opportunities for employment” than spending the same amount of funds on defense.4

A healthier and more educated citizenry fosters economic growth and makes a state more successful. On the other hand, having fewer healthy, educated, and employed residents means a less productive, less successful work force. The discussion in our state must then shift to the impacts of sequestration’s potential cuts to nondefense programs.

The Budget Control Act of 2011 established spending caps in order to cut projected funding by at least $1.2 trillion by the year 2021. It also established a Joint Committee on Deficit Reduction (the “super committee,” as it became known) to reduce federal spending by an additional $1.2 trillion beyond the spending caps. A sequestration process for spending reduction was outlined in the BCA in the event that the super committee did not reach an agreement over the cuts. Because the bipartisan committee could not reach an agreement, the sequestration process is set to go into effect in 2013. It will result in $109.3 billion in automatic cuts every year through 2021—with approximately half of those cuts made to nondefense programs.5

Sequestration impacts on nondefense discretionary (NDD) programs will be especially significant. Federal funding to education, health, and employment programs in New Mexico will decrease by about 8 percent, or $41 million, in 2013. As Graph I shows, education in New Mexico will sustain the lion’s share of these losses—with approximately 66 percent of NDD cuts made to the tune of $27.3 million next year. Health and human services activities will absorb around 26 percent ($10.7 million) of sequestration’s NDD cuts in New Mexico in 2013 with employment and labor programs losing $3.2 million. 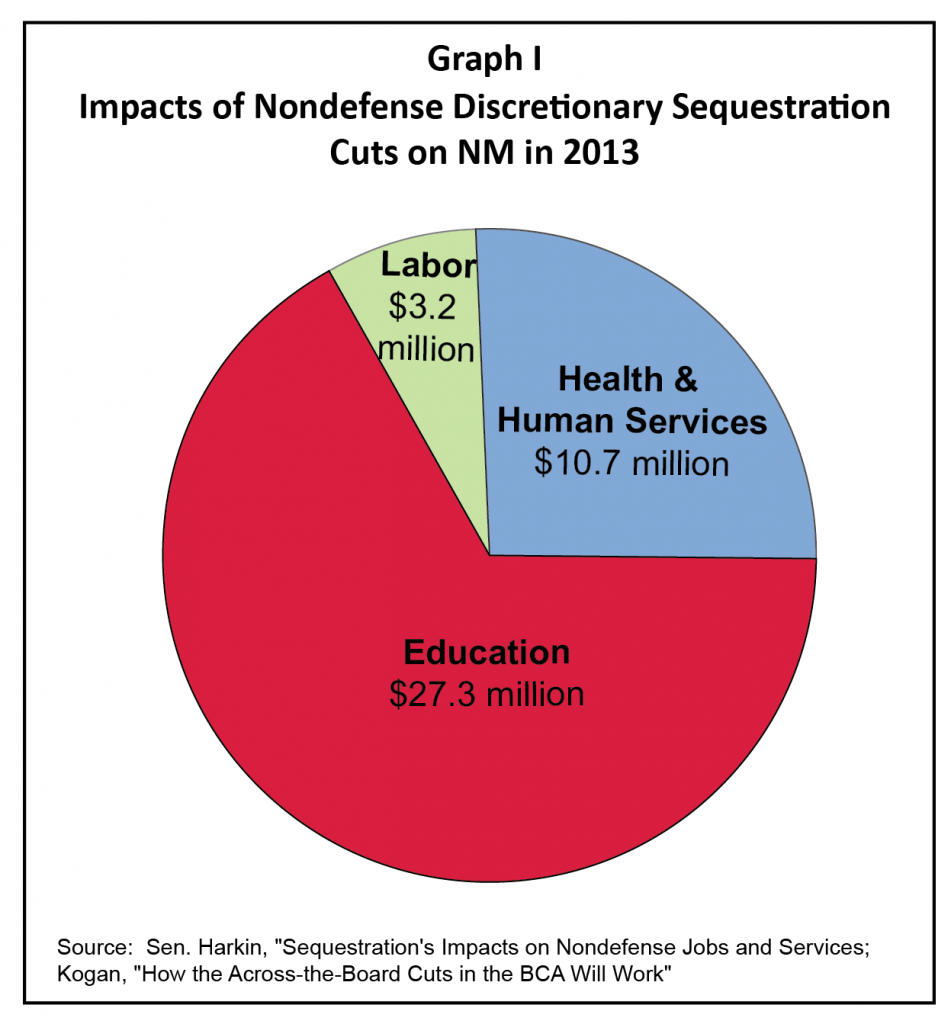 Though the dollar amounts of these looming cuts to nondefense discretionary programs are substantial, even more shocking are their possible real-world effects. Graph II shows how the cuts would affect specific programs.6 In 2013, some $27 million worth of nondefense discretionary sequestration cuts would be made in the education sector. Cutbacks of $9.2 million in federal Title I grants to local educational agencies in 2013 would mean 127 education jobs lost and 18,000 fewer disadvantaged students being helped to reach high academic standards. Cuts of $7 million to special education grants will mean 83 local jobs no longer supported by federal funding. In 2013, more than $7.4 million in impact aid to local school districts will be decreased—a change that will harm local school districts that receive these funds as payments in lieu of taxes for lands held in trust for Indian tribes and federal activity. Decreases in federal grants for career and technical education could result in some 1,800 fewer New Mexico students receiving skills training for high-demand technical jobs. 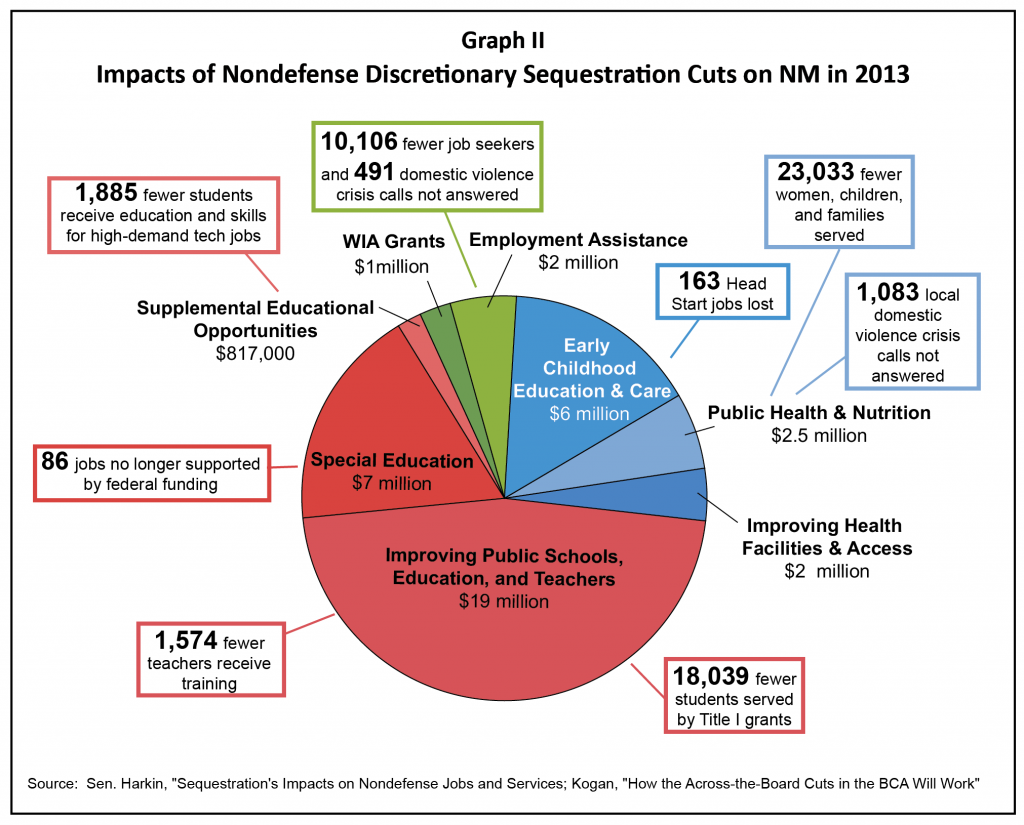 Impact to Health and Human Services

A quarter of sequestration’s nondefense discretionary cuts—more than $10 million—will impact the state’s health and human services sector. The programs that stand to suffer the most include Head Start and child care and development grants that provide early childhood care and education services for low-income families. It is estimated that in 2013 alone, 1,800 fewer New Mexico children will be served due to $6.5 million worth of cuts in these two programs. Decreases in maternal and child health funds to New Mexico will mean an estimated 23,000 fewer women and children will be supported by these benefits in 2013.

An estimated $3.2 million in sequestration cuts to New Mexico employment programs in 2013 could result in 10,000 fewer New Mexicans (500 of them veterans and another 150 at-risk youth) receiving job training. The largest losses will be seen in Job Corps training programs, which stand to lose $1.6 million in the upcoming year. Workforce Investment Act (WIA) grants that fund training for low-skilled or unemployed adults will also take a big hit—with an estimated 1,900 fewer New Mexicans receiving support in 2013.

The Budget Control Act mandates that at least $109 billion in cuts be made each year, with at least $54 billion cut from nondefense programs every year through 2021. It is estimated that during this time, New Mexico health, education, and employment programs will lose out on more than $325 million in federal funds,7 (as shown in Graph III). If a more balanced fiscal plan is not developed before January 2013, education in New Mexico will face an estimated $217 million in federal funding cuts by 2021. Over that same time period, the state will sustain more than $83 million in cuts to health and human services and nearly $25 million in cuts to employment programs. How the state will deal with cuts to these crucial social programs, what the impacts will be for New Mexicans, and what the state can do to shore up education, health care, and employment services are all questions that will need to be answered for the health and well-being of the state and its residents.

In the absence of congressional action, the automatic sequestration cuts mandated by the Budget Control Act will begin in 2013. In that first year alone, this is estimated to lead to more than $41 million in decreased federal funding to education, health and human services, and employment programs in New Mexico. But budget control and deficit reduction shouldn’t come at the expense of New Mexico’s already hurting families and sluggish economic recovery. Decreasing funds to education, health, and employment programs under sequestration means fewer teachers in the classroom, more children without adequate health coverage, and fewer adults trained for high-skill jobs.

Congress must act soon to prevent New Mexico from plunging over the sequestration fiscal cliff. A bipartisan and balanced solution—one that includes not only spending cuts, but also revenue increases— is needed to achieve deficit reduction that facilitates economic growth and supports successful communities. In order to reach this goal, the following policies are recommended:

We should strive for solutions that put New Mexicans first. We must support policies that improve the health and well-being of New Mexico’s children, families, and communities. Investments in early childhood care, education, health improvement programs, and job training opportunities make for healthier kids, more educated adults, and a more employable workforce. Sequestration’s cuts will harm not just the individuals who won’t receive services, but the economic and social well-being of the state as well. Attention must be paid to how the state will deal with such substantial cuts and what steps the state can take in the future to move forward with a focus on New Mexico families.

1 Estimates regarding sequestration’s defense cuts in New Mexico have varied widely. The low estimate is from “The New Mexico Defense Breakdown Economic Impact Report,” prepared by the Center for Security Policy, Washington, D.C., September 2011; the higher estimate was made in the FOR-UNM Quarterly Economic Forecast of the New Mexico Economy, prepared by the Bureau of Business and Economic Research (BBER), University of New Mexico, Albuquerque, NM, September 2011.
2 Sequestration’s nondefense financial impacts are based on the Congressional Budget Office’s projection of 8 percent decreases in 2012 funding levels for NDD programs. It should be noted that groups such as the Center on Budget and Policy Priorities forecast (“How the Across-the-Board Budget Cuts in the Budget Control Act Will Work,” Richard Kogan, Center on Budget and Policy Priorities, Washington, D.C., April 2012) that funding levels could be decreased by as much as 8.4 percent in the first year of sequestration—meaning that sequestration may take an even greater toll on New Mexican families than is estimated here.
3 U.S. Census Bureau, American Community Survey 2011 Survey, Washington, D.C., September 2012
4 “The U.S. Employment Effects of Military and Domestic Spending Priorities: 2011 Update,” Robert Pollin and Heidi Garrett-Peltier, Department of Economics and Political Economy Research Institute (PERI), University of Massachusetts, Amherst, MA, December 2011
5 $109.3 billion in cuts for nine years would result in an estimated $984 billion in reduced spending; this amount combines with a projected $216 billion in interest savings to reach sequestration’s required $1.2 trillion.
6 Unless otherwise noted, potential impacts are from “Under Threat: Sequestration’s Impact on Nondefense Jobs and Services,” Senator Tom Harkin, Senate Appropriations Subcommittee on Labor, Health, and Human Services, and Education, Washington, D.C., July 2012
7 Due to an expected increase in Medicare costs, the 2 percent sequestration decreases in Medicare funding each year will result in increased interest savings. More money saved by Medicare cutbacks means slightly smaller cuts in other non-defense programs each year in order to meet the $54 million in required cuts to nondefense programs.