Who are immigrants and why do they immigrate?

People who come to the U.S. from other countries want a better future—for themselves and their children. Most say: “I came here so I could provide for my family,” or “My dad had a dream for us, for a better life,” or “I could not go to college in my own country.” Sadly, life for immigrants—and for their children—has become very hard since the terrorist attacks of September 11, 2001. The U.S. has never had a good system to help immigrants join and fit in to American society and, after the attack, many Americans did not trust people from outside the U.S. Some states have passed laws that make life very stressful and unsafe for immigrants.

Some immigrants become American citizens through the naturalization process. Those who don’t but want to live here long-term are called resident aliens. Immigrants who do not become so-called naturalized citizens still have most of the rights enjoyed by U.S. citizens—the major exception being the right to vote. All children born in the U.S. are citizens regardless of the immigration status of their foreign-born parents.

Some immigrants are undocumented—meaning they live in the U.S. but they do not have legal status and cannot get lawful work. They may have entered the country without documentation or they may have stayed after their visa or other temporary documentation expired. If Immigration and Customs Enforcement (ICE) officials find a person without current immigration documentation, that person will usually be deported.

Who are New Mexico’s immigrants and their children?

If we think of New Mexico as a town of 100 people, ten of those people would be foreign-born. Only four of these ten people would be undocumented, and three of them would be naturalized citizens1—and thus, they could vote. Four out of the ten children living with these foreign-born parents would be poor,2 but almost eight of them would be able to speak English well.3 Most children in New Mexico are citizens even if their parents were born in another country.

What do immigrants bring to the state?

Immigrants bring many strengths with them—they believe in hard work and the value of schooling for their children; they want to live in and build thriving communities; and they tend to have stable, healthy families. More than one in ten workers in the state is an immigrant and these workers play a key role in our state because their earnings and the taxes they pay circulate billions of dollars through the state’s economy.

Research shows that being able to speak two languages (to be bilingual) is a strength. People with this skill are better able to plan, focus, reason, multi-task, recall, and solve problems than those who speak just one language (or are monolingual). Thus, it is good to foster the skill of speaking two languages. Fifty-nine of New Mexico’s 89 school districts have bilingual programs. Of the more than 32,000 foreign-born residents in New Mexico, almost four in ten (38 percent) are enrolled in college classes.4

What challenges do immigrant children face in New Mexico?

In 2012, the Governor asked the state Legislature to reverse the law that allows undocumented immigrants to receive driver’s licenses. It did not pass. Many immigrant children do not have access to good early childhood programs or good health care, both of which help them do well in school and allow them to become contributing members of society. However, undocumented youths who finish high school in New Mexico can pay resident tuition at our state universities and colleges. New Mexico is just one of 13 states that allow this. It helps more immigrant students go to college here, but undocumented students still cannot get federal funding for college. 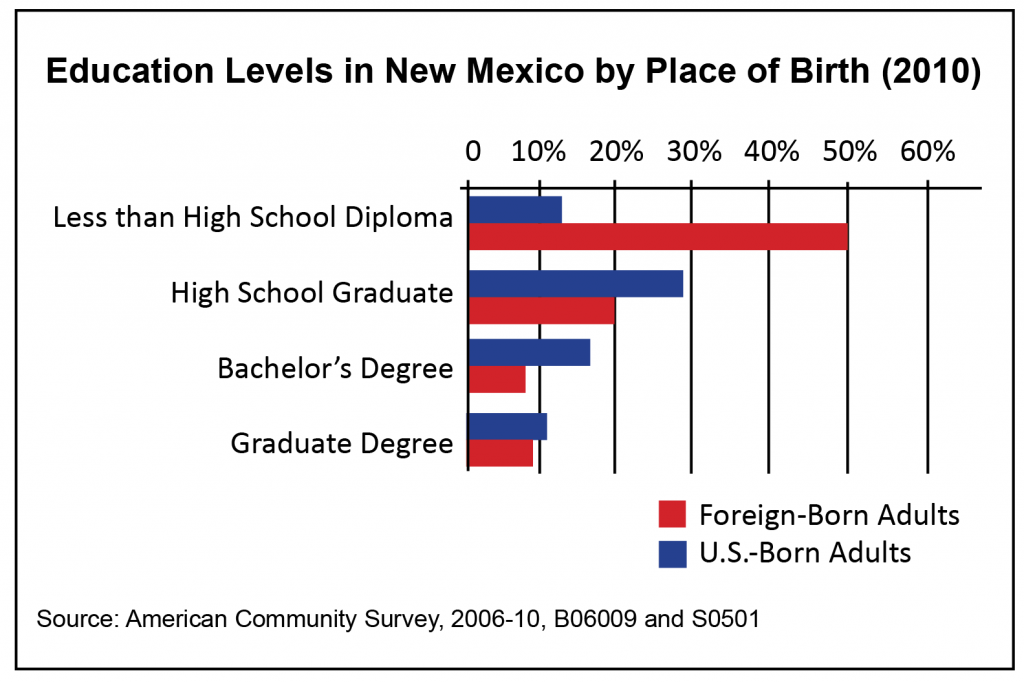 All over the country, undocumented immigrants live in fear of being deported. Having a child who is a citizen will not keep an undocumented parent from being deported. Immigrant parents worry about how their children will cope if they are left alone in the U.S., as they often are when parents are deported. These children are at risk of shock, stress, and depression, all of which may have long-term harmful effects on their health and academic achievement. Children brought here by their parents when very young are often fearful to return to a country that has now become foreign to them. Schools can be safe places where children of deportees can get help, and many New Mexico communities have united to help these families with housing, food, and legal aid. 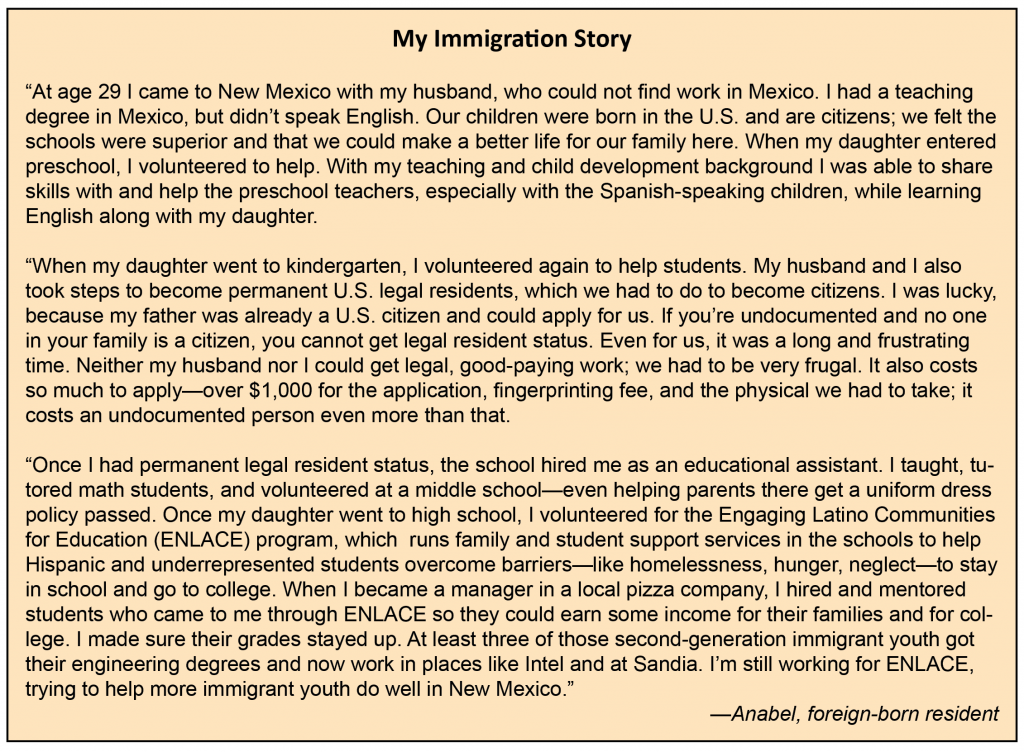 What can be done in New Mexico?

Immigrants, even those who are undocumented, are a key part of our state’s economy. Many businesses would not do as well without immigrant workers. The U.S. has immigration policies that need to be changed. There are things we can do in this state to support immigrant children and their families. We can:

NM KIDS COUNT is a program of the Annie E. Casey Foundation.