Any discussion of health care reform should begin with covering all children. This means, first and foremost, enrolling all children who are eligible for Medicaid and keeping them enrolled. To achieve this goal, Medicaid must be funded at levels that support not just increased enrollment, but also retention of all eligible children. Appropriations that explicitly support increasing and maintaining enrollment of children in Medicaid should be the down payment on a plan to insure all New Mexicans.

Maximizing Medicaid enrollment was part of every health care proposal reviewed by the Health Coverage for New Mexicans Committee this past summer. Covering all kids is also part of the Governor’s Health Solutions proposal. Just by enrolling those children who are currently eligible for Medicaid, we would extend health insurance to nearly 50,000 more children.1 Enrolling these children and keeping all Medicaid-eligible children continuously enrolled would greatly improve the overall health of New Mexico’s children.

Currently, 266,402 children are enrolled in Medicaid. However, the state has not been very successful at keeping eligible children enrolled. Since there is no specific data on Medicaid retention, enrollment trends over time are used as a measure of retention. Over the past few years, enrollment has fluctuated significantly even as the overall number of Medicaid-eligible children has increased. From fiscal years 2004 to 2008 the difference in enrollment swung from a high of 276,187 to a low of 253,548 and back to a high of 277,181 – affecting more than 20,000 children2 (see Chart 1). 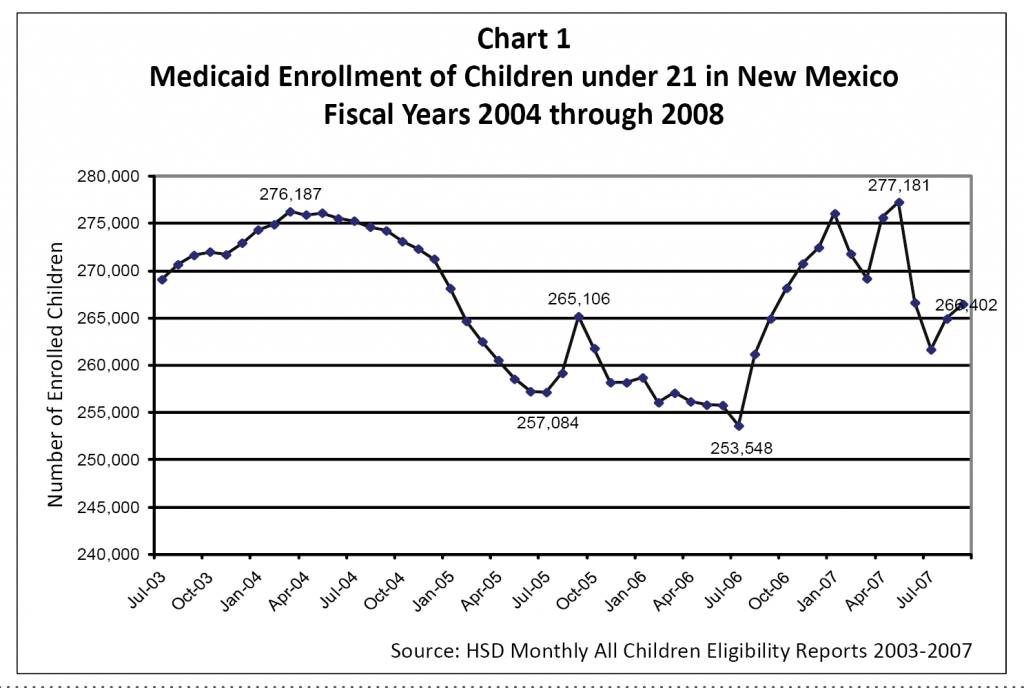 The Mathematica study prepared for the Health Coverage for New Mexicans Committee estimated that 70 percent of all children in New Mexico lose insurance coverage at some time during the year, which includes children on Medicaid.3

Continuity of health care is important to keeping kids healthy. Mathematica noted that only having part-year insurance “can disrupt access to care, compromise the quality of care and contribute to the higher non-medical costs of coverage in New Mexico.” Further, New Mexicans who are uninsured for part of the year generally report lower health status than New Mexicans who are insured for the full year.4 A 2005 study reported in the New England Journal of Medicine noted that “children with intermittent insurance have notable problems…

[t]hey do not get medical care, they do not get prescriptions filled, or they go without preventive care visits.”5 Disruption of medical care can also be costly to the state’s health care system. Uninsured children who do not have a regular doctor are more likely to be hospitalized for a preventable illness than insured children.6 The Governor’s Health Solutions proposal recognizes this problem as well, highlighting that children without health care are not as able to learn and that the cost of care for the uninsured often gets shifted to the insured, increasing the cost of care for all New Mexicans.7

The state has invested significantly in Medicaid in the past few years. However, none of this investment has resulted in an increased enrollment of children. By necessity, more than 40 percent of the increased funding was needed to replace lost federal funding (see Chart 2). 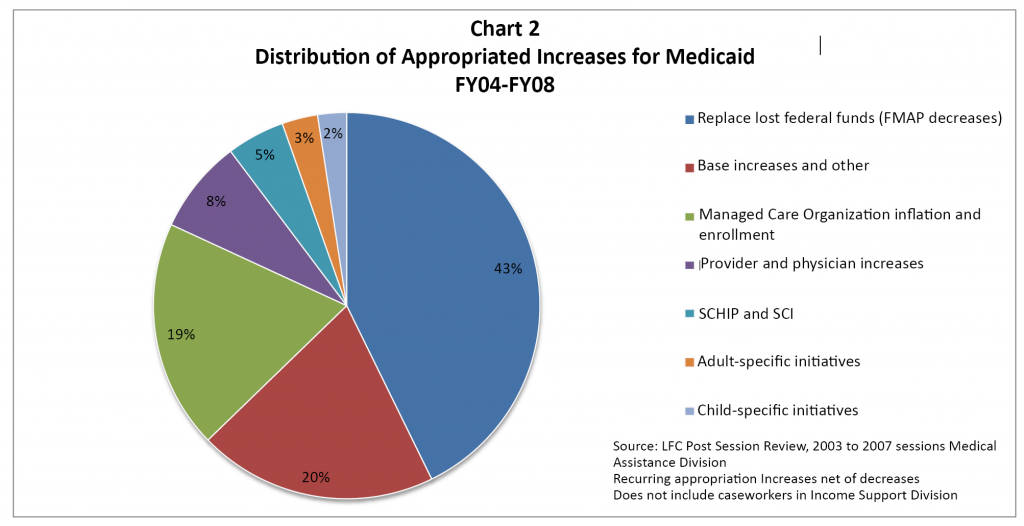 However, appropriations have also been targeted for specific initiatives that did affect enrollment trends. Such initiatives included changes in outreach programs (with the intention of increasing enrollment) and in certification procedures (with the intention of decreasing enrollment). The Legislature could change this by using its appropriation process to explicitly fund increased children’s enrollment by tying it to enrollment targets or implementation of policies that will help enroll new children and retain currently enrolled children.

In the past, increased enrollment has sometimes been funded after the fact through supplemental appropriations. This has been due to either the rationale of “enroll first and then ask for funding” or because of an understandable skepticism by lawmakers regarding enrollment targets that have frequently not been met (see Chart 3). 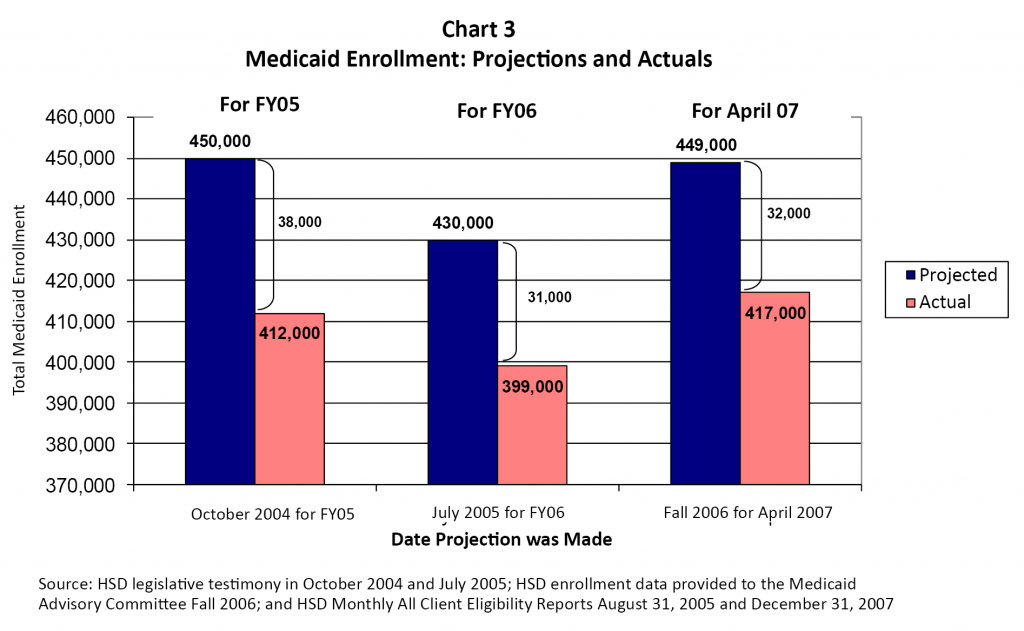 The Human Services Department has recently implemented procedures that have been shown in other states to increase retention and continuous coverage of children on Medicaid. The Department also proposes to increase outreach efforts to enroll more children. These proactive approaches should be supported with the funding upfront to achieve the goal of increased enrollment.
HSD has estimated that 48,000 children are eligible for Medicaid but not enrolled. The Department estimates it would cost $44 million in state General Fund revenue to enroll these children. At the current federal match rate, this $44 million investment would generate $107 million in federal funds.8

That means for every child the state covers, three children would be covered by the federal government. The primary benefit of enrolling all eligible children is having healthier children who are ready to learn and succeed, but a secondary benefit is the additional economic activity generated by the increased federal matching dollars. A 2003 study estimated that for every state dollar spent on Medicaid in 2002, $5.68 was seen in increased economic activity.9 This was generated both by the large amount of federal matching dollars but also through additional economic activity from increased health care spending and wages earned. This study and the recent Mathematica study show that an investment in enrolling all eligible children in Medicaid is also an investment in the state’s overall economy and its health care system, especially in rural areas.10

Any plan to insure all New Mexicans must be backed by funding increases for Medicaid, which ensure that all eligible children will be enrolled and retained within the next few years. Increased enrollment and retention can only be a “win-win-win” for New Mexico: healthier children, a more robust health-care system, and a stronger New Mexico overall.