One reason it makes sense to start with kids is that it allows us to maximize two federally funded programs – Medicaid and the State Children’s Health Insurance Program (S-CHIP) – both of which inject millions into the state’s economy, create jobs, keep our health care infrastructure on solid ground, and keep health care costs lower for everyone.

Every dollar we invest in Medicaid draws down almost three dollars in federal funds. The more money we invest, the more federal dollars we draw down. Like dropping a pebble in a pond, each Medicaid dollar has a ripple effect throughout the state’s economy.

When children have Medicaid coverage, there is an increased demand for health care – all of which is provided through the private marketplace. This generates economic activity, which creates jobs. Medicaid payments to doctors and other providers translate into more jobs for other health care workers. But the ripple effect continues, and includes increases in employment in those industries that supply goods and services to health care providers, such as janitorial services and medical equipment manufacturers. These increases in employment result in increased spending at local businesses by the people who occupy the new jobs created by the initial investment.

While providing health care to our state’s most vulnerable children, Medicaid has the added advantage of boosting job creation in the private health care sector. 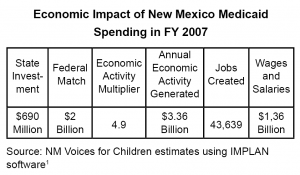 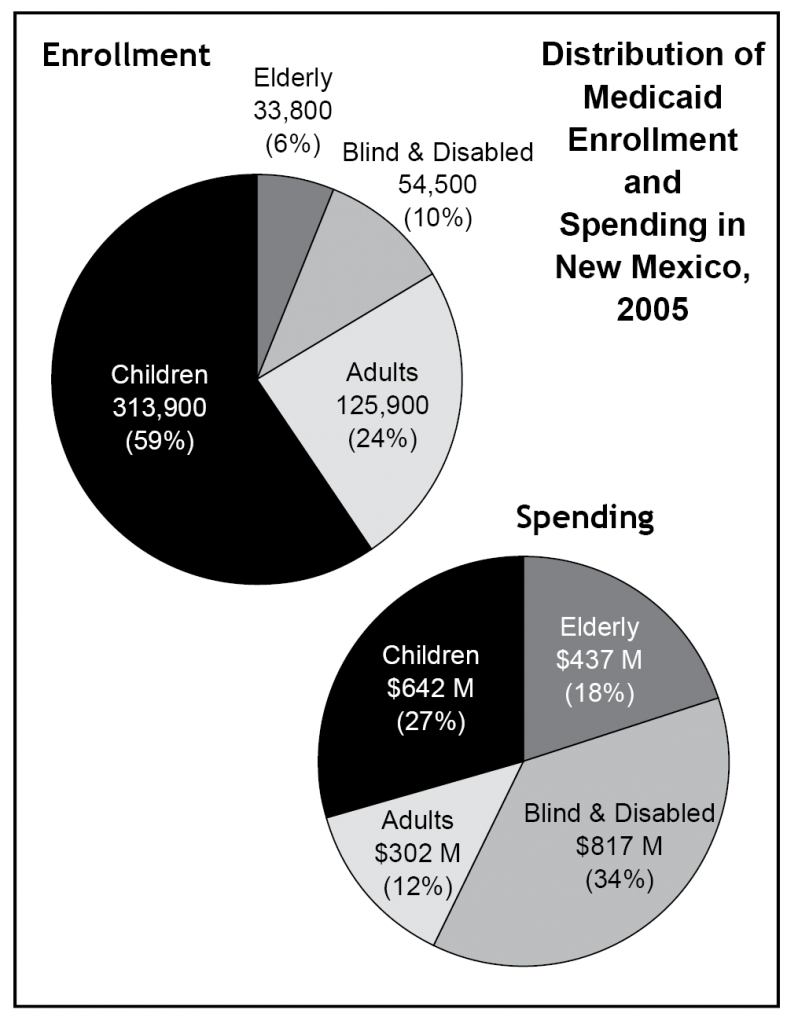 Medicaid also allows people to get preventative and maintenance care, which greatly reduces medical costs down the line. Many people who do not get preventative or maintenance care end up in the emergency room when their illness has reached a crisis stage and treatment is more expensive. Therefore, to the extent that Medicaid provides insurance to people who would otherwise be unable to pay their medical bills or seek preventative care, it helps to contain the cost of health care for all New Mexicans.

Another reason it makes sense to cover kids as a first step toward covering everyone is that, by and large, children are relatively inexpensive to cover. While kids make up 59 percent of Medicaid enrollment, they only make up 27 percent of Medicaid expenditures. That’s because children primarily need well-child checkups, screenings and preventative care, which are low-cost. They are much less likely than adults to need treatment for chronic illnesses like cardiovascular disease and diabetes, as well as end-of-life care, all of which are expensive. 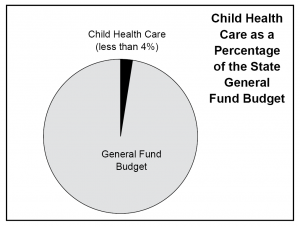 In fact, the child coverage portion of Medicaid and S-CHIP combined is less than 4 percent of the state’s general fund budget.

Medicaid also benefits the economy in the long term. An investment in a child’s health is an investment in New Mexico’s future because children learn best when they are healthy. In order to have the best chance for school success, a child must have screenings for vision, hearing, developmental delays, and other issues that can impact learning. A child with an undiagnosed, untreated health problem is less likely to succeed in school, less likely to graduate, more likely to earn a poverty-level wage, and more likely to require social services and even incarceration.

Medicaid is a vital component of our state’s health care system and an engine of state economic growth. The intricate linkages between public and private insurance mean that health care for most New Mexicans is subsidized, to some degree, by Medicaid. Current funding for New Mexico Medicaid generates $3.36 billion in economic activity annually and sustains roughly 43,600 New Mexico jobs.

1. An estimation technique known as input-output (I/O) modeling is the best way to capture the direct, indirect, and induced effects of an economic event, such as federal Medicaid spending. This analysis utilizes IMPLAN (Impact Analysis for Planning) Professional™, an I/O modeling software.