Families immigrate to the United States today for the same reason immigrants have come here for centuries: to make a better life. The U.S. is a blend of indigenous peoples and immigrants from all across the globe. New Mexico is a prime representation of this uniquely American mix. And while immigrants tend to be hard workers, anyone can hit a rough patch and need some help. That’s why we have a safety net of programs to help families put food on the table, visit the doctor, even pay the electric bill when they fall on hard times. Immigrants to the U.S. are not eligible for most of these programs, and the few that they are allowed to access may soon be pulled out of reach. This will not only have a devastating impact on the health and well-being of families with members who are immigrants, but it will also hurt New Mexico’s economy and result in job losses.

In August 2019, the Department of Homeland Security (DHS) published a rule change to an immigration test known as “public charge.” It shrinks the number of safety-net programs that immigrants may access if they hope to be considered for permanent residency in the U.S. (i.e. receive a “green card”). The rule applies a similar test to people seeking to extend or change their temporary status in the U.S. (such as student or employment visas).

Although scheduled to go into effect on October 15, the rule has been temporarily blocked by injunctions handed down from five federal courts, all of which have found that the Trump administration will not likely succeed in arguing that the DHS rule is lawful. The federal government is appealing these decisions and is seeking to lift the injunctions. But for now, and while these cases proceed, the rule is not being implemented. 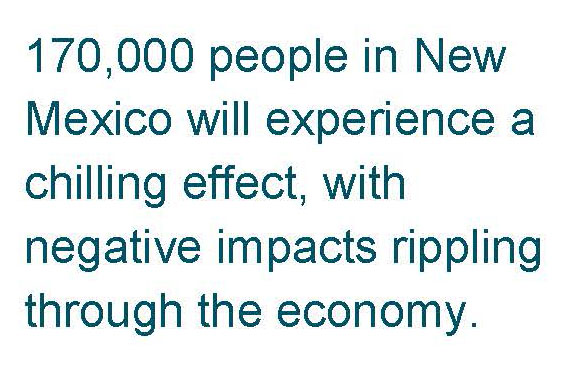 If the new public charge rule goes into effect, it will make it much more difficult for low- and moderate-income families to build new lives in the U.S. if they are considered likely to use public benefits such as nutrition, housing, and health care programs for which they may legally qualify. The Trump Administration’s version of the rule takes such a drastic view of what constitutes a “benefit” that if it were applied to the U.S.-born population – Americans who are not immigrants – roughly half might be deemed not acceptable to stay in the United States.[i] These programs help working families get through hard times, maintain their health, and raise children who thrive. Proposed public charge changes would put hundreds of thousands of New Mexican families, who are valuable members of our communities, at risk.

In addition to excluding people from being able to stay in the U.S., it’s predicted that the rule will have a widespread chilling effect, with millions of immigrants across the nation who are eligible for support unnecessarily deterred from seeking critical services for themselves or their children.

The Fiscal Policy Institute (FPI) in New York and New Mexico Voices for Children estimate that if the public charge rule goes into effect, 170,000 people in New Mexico would experience a chilling effect, including anxiety and confusion about whether applying for public benefits will affect their immigration status or that of their family members. This “chilled” population includes everyone in a family with an immigrant who is not a naturalized citizen or permanent resident, and who is currently receiving one of the public benefits named in the rule. Among the people in the chilled population are 70,000 New Mexican children under 18 years of age, most of whom – 60,000 – are U.S. citizens by birth. If hundreds of thousands of New Mexicans skip health care, food, and housing assistance in order to avoid problems with immigration, the result will be a sicker, hungrier, poorer New Mexico, and could create even more challenges for the children in our state on top of those that are evidenced by our KIDS COUNT ranking of 50th in child well-being. (FPI’s state-level analysis of the chilling effect is available in the tables below for all 50 states and the District of Columbia.) 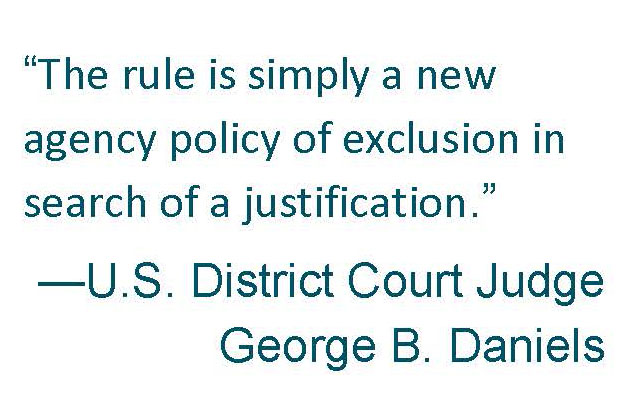 Not everyone who is concerned about public charge will avoid enrolling in programs for which they qualify. Based on research available in 2018, FPI estimated a 25 percent drop off in enrollment, based on past experience.[ii] An important survey conducted since that time has reinforced that estimate, finding that even though the rule has not gone into effect, 21 percent of adults in low-income immigrant families—those who would likely meet income eligibility requirements for most of these programs – reported that someone in their family avoided benefits.[iii] Advocates and service providers will assuredly work closely with immigrants and their families to help them understand whether they are likely to face a public charge designation and which benefits may be considered. The projected drop off rate takes this into account, since the past experience was also at a time when advocates and service providers worked to clarify the rules.

This rule puts the states at risk for losing millions of federal dollars. Looking only at health and nutrition supports, the two largest benefits named, a 25 percent drop in enrollment for the chilled population translates into $146 million in lost federal funds across New Mexico. The loss of federal benefits in turn will create negative local economic ripple effects. Businesses such as grocery stores will lose income due to the decrease in SNAP recipients. Hospitals, doctors, and nurses will lose income due to a reduction in Medicaid usage. Many other businesses will lose revenue, as immigrant families that struggle to make up for the lost nutrition and health care benefits shift their spending priorities. This reduction in spending and income will result in lower investment and related job loss. The predicted loss to the state’s gross domestic product (GDP) is as much as $285 million, with an additional loss of 1,937 jobs, and $17 million in state tax revenue.

The human and economic impacts are large even if we use more conservative estimates about the chilling effect. It is possible, for example, that children’s use of Medicaid will decline less than that of adults, since the final rule clarifies that Medicaid use for children is not to be considered in public charge determinations. In the more conservative estimate we assume that parents will recognize that Medicaid for children are excluded from the public charge rule, and that there will be no drop in enrollment for children. Further, we assume that the drop off rate for SNAP and for adults in Medicaid is 15 percent rather than 25 percent. 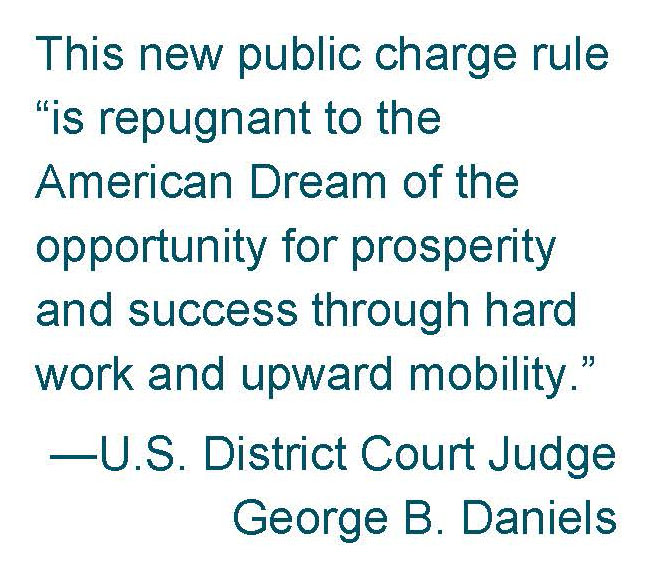 Even with these considerably more conservative assumptions, however, the human and economic impact remains very large. The projected loss in federal benefits in New Mexico is $52 million. The projected decline in GDP due to economic ripple effects is as much as $96 million, and the projected job loss is 654.

Judge George B. Daniels of the United States District Court of the Southern District of New York made strong statements against the new public charge rule. In the preliminary injunction that temporarily halts the rule from going into effect, Judge Daniels writes that members of the Trump Administration “do not articulate why they are changing the public charge definition, why this new definition is needed now, or why the definition set forth in the rule – which has absolutely no support in the history of U.S. immigration law – is reasonable. The rule is simply a new agency policy of exclusion in search of a justification.” The rule, Judge Daniels said, “will punish individuals for their receipt of benefits provided by our government, and discourages them from lawfully receiving available assistance intended to aid them in becoming contributing members of our society.” And, he says, this new public charge rule “is repugnant to the American Dream of the opportunity for prosperity and success through hard work and upward mobility.”[iv]

This proposal has exacerbated the climate of fear, which, along with widespread misunderstanding about the rules, has already caused many parents to forgo the benefits that their U.S. citizen children are eligible to receive. Thousands of New Mexicans – including U.S. citizens, and current and prospective authorized immigrants – are having to choose between meeting basic needs and the ability of a family member to legally immigrate. The bottom line message that’s conveyed by this administration in its policies and rhetoric is that if you are not young, healthy, educated, and wealthy, you are not welcome here.

New Mexicans believe that everyone deserves to be treated with compassion, regardless of who they are or where they were born, and these public charge changes are a direct assault on those values.

[i] State of New York, City of New York, State of Connecticut, and State of Vermont v. United States Department of Homeland Security, Secretary Kevin K. McAleenen, October 11, 2019. David Dyssegaard Kallick is an expert witness in the case.
[ii] Several studies led us to the 25 percent estimate. One worth noting in particular showed a drop in participation in public benefits programs after welfare and immigration law changes in the 1990s that was 26 percentage points greater for households with a non-citizen than it was for citizen households, a differential that can be attributed to the chilling effect for immigrants who were worried that making use of public benefits for which they qualified could create immigration status problems for themselves or other family members. See M.E. Fix and J.S. Passel, “Trends in Noncitizens’ and Citizens Use of Public Benefits Following Welfare Reform: 1994-1997,” Urban Institute, 1999.
[iii] H. Bernstein, D. Gonzalez, M. Karpman, and S. Zuckerman, “One in Seven Adults in Immigrant Families Reported Avoiding Public Benefit Programs in 2018.” Urban Institute, 2019.
[iv] Danilo Trisi, “Administration’s Public Charge Rules Would Close the Door to U.S. to Immigrants Without Substantial Means,” Center on Budget and Policy Priorities, November 11, 2019.