A Blueprint for a Prosperous State

We all want a prosperous state, but prosperity requires investments. You can’t grow a garden without good soil, sunlight, water, and some hard work. Same with a state—you can’t have prosperity without resources, infrastructure, and a skilled workforce.

But instead of following an investment strategy to prosperity, New Mexico has tried to cut its way to prosperity. You could call this the “don’t build it and let’s hope they will come anyway” strategy. Or perhaps the “magical-thinking-of-trickle-down-economics” strategy.

This has been the wrong strategy for New Mexico.

Building a prosperous state will take a more sensible approach. If we could recoup the millions of dollars in tax breaks we’re losing to well-connected special interests, we’d have money for the public investments our businesses and economy need. Investments like a well-educated and skilled workforce, state-of-the-art health care, up-to-date communications infrastructure, and affordable child care, to name just a few.

As the economy started to improve, lawmakers made a fateful choice—massive tax cuts in 2013 for corporations, instead of investment in the common good.

The tax cuts, it was promised, would bring jobs to New Mexico.

But tax cuts don’t create jobs—public investment creates jobs. No business can operate here or anywhere else without a skilled workforce and customers with money to spend. These are only created when we invest in our human capital.

Failed tax cuts and the recession led to a lost decade where the state budget failed to keep pace with inflation and population growth. And when new threats have appeared—such as the opioid epidemic—the state has had no money set aside to solve such problems.

After years of flat budgets and spending cuts that have severely compromised our schools, universities, and other vital systems, a better revenue picture has finally been forecasted for the state.
But we had barely heard the good news when it was followed by bad. This money has yet to materialize and already some lawmakers are talking about spending it on tax rebates that will do little to spur economic activity. The fact is, we need to invest every bit of that new revenue into vital services like health care and education.

In fact, this new revenue doesn’t even begin to make up for all the money we’ve lost by enacting failed tax cuts for the well-connected. We also need to recoup lost revenue so we can make the investments our state needs in order to prosper. 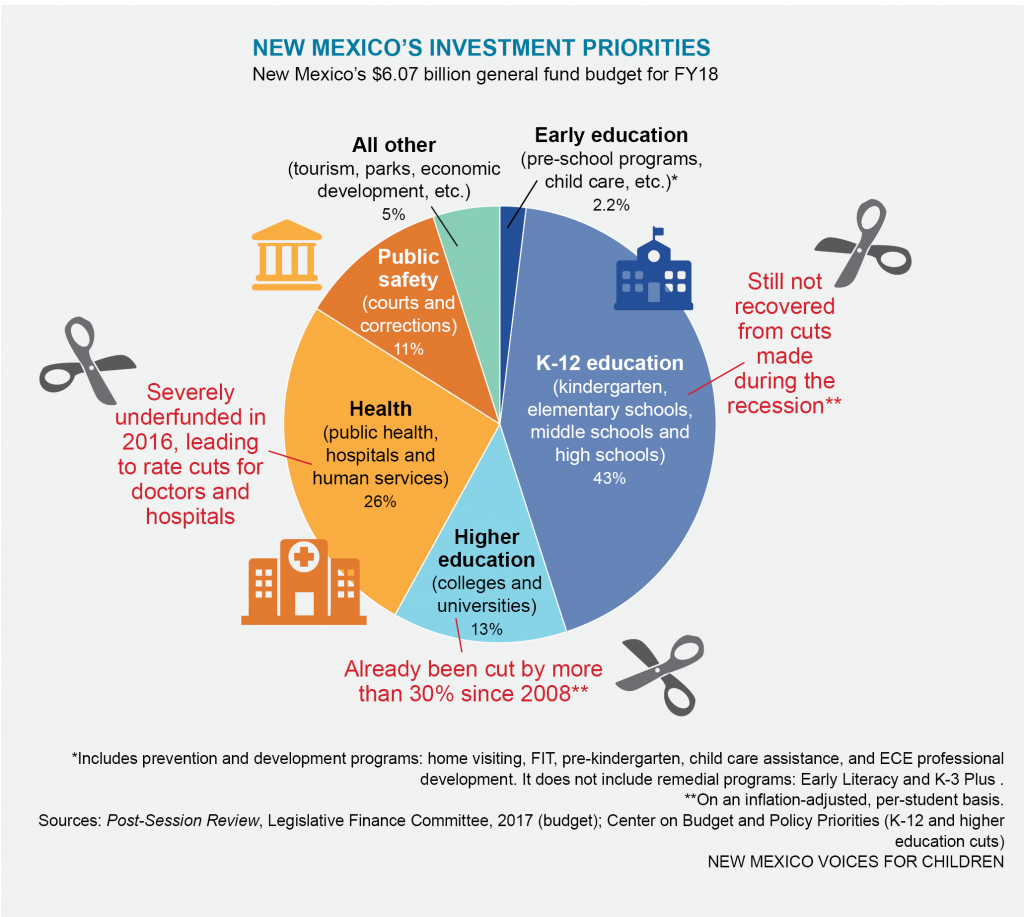 The path to a more prosperous economy

The path to a strong New Mexico begins with making smart investments. Investments that would shrink class sizes in our schools, provide child care for more hard-working families, allow us to reopen the school-based health centers that had to close, and lower college tuition to what it was before we made all the deep cuts to higher education funding. There are many common-sense ways to raise new revenue, which could be used to educate our workforce, create jobs, and bolster our economy:

• Repeal the 2013 corporate income tax cuts
The big corporate tax cut of 2013 cost more than expected, and it’s also failed to create jobs. There is no excuse for keeping bad tax policy on the books and New Mexico lawmakers need to repeal this one.

• Repeal the tax break for manufacturers
At the same time the corporate income tax rate was cut, the formula for how manufacturers were taxed was changed so that companies like Intel could get away without paying any taxes. But Intel has since cut jobs in New Mexico.

• Raise the personal income tax rate for those at the top
In 2003 New Mexico cut the personal income tax rate by nearly half for the wealthiest households. As it is now, the wealthiest pay less of their income in state and local taxes than most of the rest of us. (See the graphic below for just how unfair our tax system is.) Meanwhile the GOP tax plan signed into law at the end of last year gave more tax cuts to the wealthy. Raising income tax rates for very-high income New Mexicans will raise much-needed revenues and help to turn our upside-down tax system right-side up. 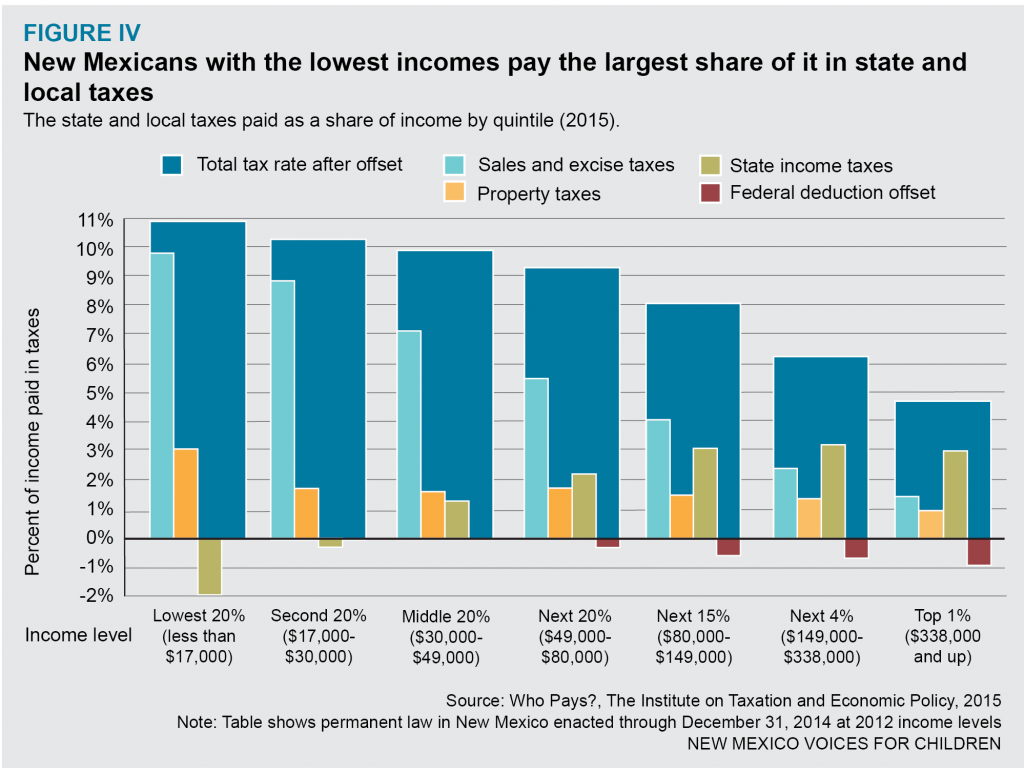 • Curtail tax breaks for capital gains income
New Mexico taxes income from capital gains (profits from the sale of assets such as stocks or real estate) at half the rate that it taxes the wages of working people. This break mainly helps the wealthiest—those making over $200,000—while taking revenue away from much-needed public investments. It also helps make our tax system less fair.

• Repeal wasteful and ineffective tax breaks
There are hundreds of tax breaks that have been carved out of the gross receipts tax (GRT) base over the years, many of which simply qualify as a handout to special interests. What’s more, few of them have ever been evaluated for effectiveness. Repealing wasteful and ineffective tax breaks will allow lawmakers to put that money to work in our schools and communities where it will benefit everyone.

• Could raise hundreds of millions.

• Increase the distribution from the Land Grant Permanent School Fund
New Mexico has the nation’s second largest Land Grant Permanent School Fund, now with more than $16 billion. Legislators and voters could choose to increase the distribution of that fund, which would help us better fund K-12 schools and our higher education system, as well as invest a tiny portion in the early childhood education programs that will help our kids do better in school so more of them can attend college.

• Increasing the distribution by 2% provide an additional $300 million for education.

• Enact a health care provider assessment
Instead of facing cuts in Medicaid reimbursement rates, many health care providers are asking to be assessed a provider fee. The money collected could then be added to the state’s Medicaid budget, allowing the state to draw down federal matching money and prevent additional cuts to health care services for children, the disabled, and elderly.

• Amount raised would vary depending on rates.

• Raise alcohol and tobacco taxes and include e-cigarettes
These taxes could both increase revenue and promote greater wellness, particularly when they act as a disincentive for young people to take up smoking.

• Increase the tax on the sale of motor vehicles
New Mexico’s excise tax on motor vehicles is lower than the general sales tax on most other goods purchased in the state. It’s also lower than in surrounding states, and could stay lower even if it was increased.

• Enact a new tax on diesel fuel
A large portion of this tax would be paid by out-of-state entities like interstate trucking companies.

• Amount raised would vary depending on rates.

By making some of these common-sense fixes to our state’s tax code, New Mexico could be back on the path to making the investments that our businesses and communities need. But we also must make a change to ensure that we stay on track: