So-called ‘Reform’ is Really Another Giveaway to the Very Rich

ALBUQUERQUE, NM—Average New Mexicans would not benefit much from President Trump’s tax reform proposal, which would give the biggest tax breaks to New Mexico’s millionaires. That’s according to a report released recently by the Institute on Taxation and Economic Policy (ITEP).

“We should be very clear: what the President and Republican leaders in Congress are proposing is not tax reform,” said James Jimenez, executive director of New Mexico Voices for Children, which works with ITEP on fiscal policies. “Trump, Ryan, and McConnell are pushing massive tax cuts for millionaires, billionaires, and corporations. These tax cuts will be paid for by cuts to Social Security, health care, education, and other programs that benefit working families and the whole nation.”

In all, 42 percent of the value of the tax cuts in New Mexico would go to the top 1 percent of earners under the proposed tax plan. New Mexico has the second highest rates of poverty and of working families who are poor in the nation.

“The recently failed GOP health plan was really a tax cut for the wealthy disguised as health reform. Trump’s plan for overhauling the tax code is a tax cut for the wealthy and corporations marketed as tax reform for the middle class,” said Gerry Bradley, senior researcher and policy analyst at NM Voices. “Despite what Trump says, this is not a recipe for job creation and economic growth. As we have seen over and over since the Reagan years, trickle-down tax cuts do nothing to promote either.”

The case for the plan’s corporate tax cuts is also frail. Trump and Republican leaders claim the corporate income tax rate is too high, but another ITEP analysis in April found that most profitable corporations actually pay an average effective tax rate of 21 percent, far less than the 35 percent specified in the tax code.

“If policy makers truly wanted to create good jobs and help the middle class they would not push tax policy that redistributes income upward to the rich, said Bradley. “For the last 40 years the gap between the 1 percent and the rest of us has widened, and that has thrown our nation’s economy out of balance. Our economy works best when hard-working families are earning enough money to provide for themselves and their children,” he added.

The ITEP report is available online at https://itep.org/trumpmilprelim/.

Two New Mexico-specific graphics have also been included in this email for your use. 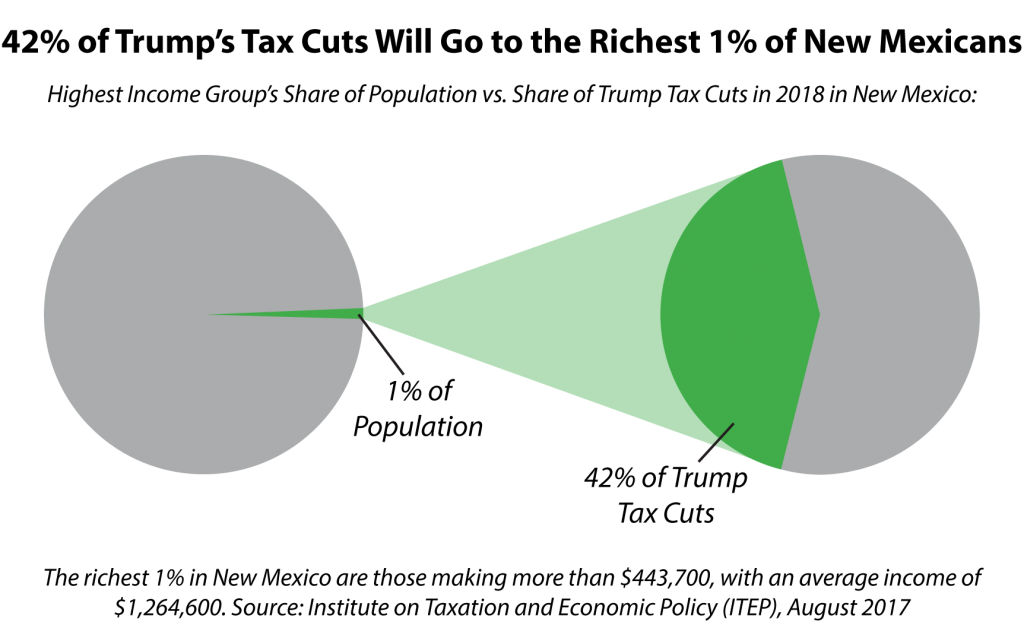