Who it would help, how much they would benefit, and why indexing it to inflation is necessary

Raising the minimum wage is an effective strategy for reducing poverty in New Mexico, particularly given the erosion of its purchasing power since it was last raised in 2009. In the legislative session that begins in January 2017, New Mexico lawmakers should enact legislation to raise the minimum wage to $12.50 per hour by 2021, if not sooner. This would establish a minimum wage that is roughly 60 percent of the state’s median wage. While this level for the minimum wage could not be considered a living wage, thousands of families would benefit—as would the state’s economy as that money was spent at local businesses.

In recent years the cities of Albuquerque, Santa Fe and Las Cruces have acted to raise the minimum wage in their communities above that of the state. If the state raised the state’s minimum wage to $12.50 an hour by 2021 in the upcoming state legislative session, it would be the first minimum wage increase for the whole state since the present minimum wage of $7.50 took effect in January of 2009. This report assumes an increase in five $1.00 increments, from $7.50 to $8.50 an hour in 2017 and to $9.50 an hour in 2018 and so forth, up to $12.50 an hour by 2021. In 2017, according to the Economic Policy Institute (EPI), there will be about 795,000 workers statewide making an hourly wage in New Mexico, rising to 825,000 in 2021. The EPI estimates that in 2021, 225,500 (or 27 percent) of those 825,000 workers would be directly helped by raising the minimum to $12.50 an hour. An additional 22,900 workers would be indirectly affected—their wages would rise due to ‘spillover effects’ from raising the wage to $12.50. The total number of workers affected would be 248,400 or about 30 percent of the 825,000 hourly workers. This report describes the characteristics of these low-wage workers and looks at the EPI’s estimates of the wage impacts of raising the state’s minimum wage. 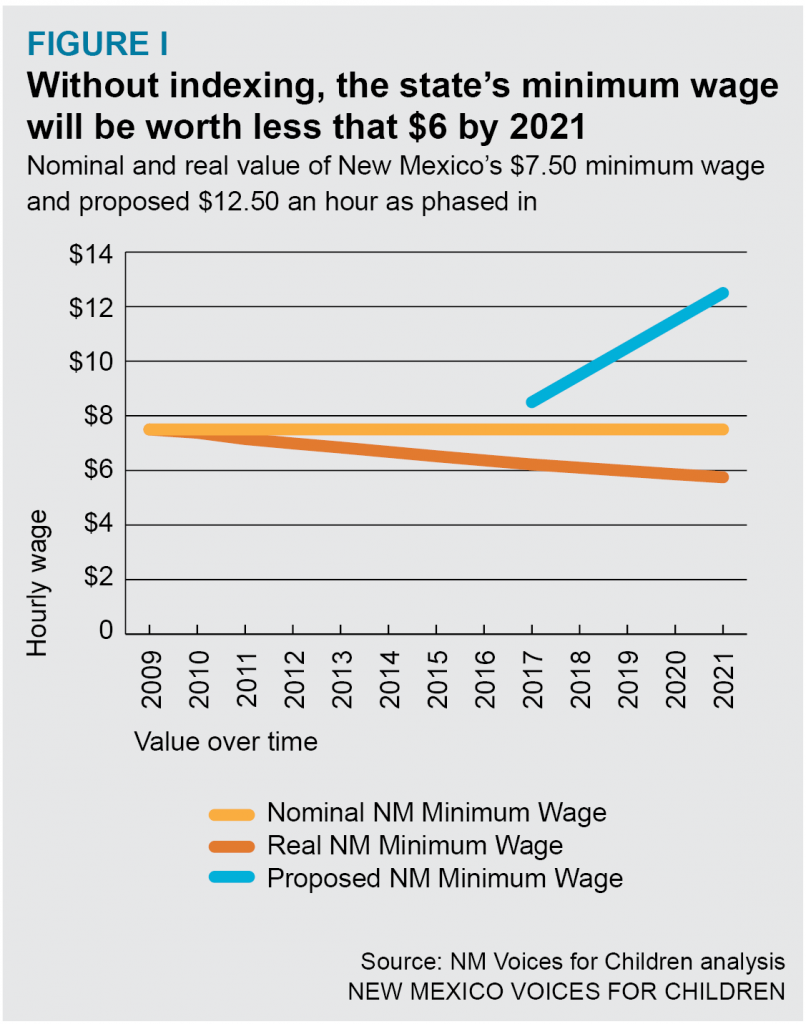 The Necessity of Indexing the Minimum Wage to Inflation

The New Mexico minimum wage was last increased in January 2009, to $7.50 an hour. That $7.50 an hour wage was not indexed to inflation as measured by the Consumer Price Index and therefore its purchasing power has declined with rising prices. The wage will have lost almost one quarter (23.3 percent) of its value by 2021. That is because the Consumer Price Index is expected to increase by about 2 percent for each year between 2016 and 2021. Figure I shows that the $7.50 an hour wage (show by the light orange line) had declined in value to $6.52 an hour in 2016 (the dark orange line), and will decline further, to $5.80 in 2021, even with inflation rising by a fairly low 2 percent per year. A proposal to raise the minimum wage in stages to $12.50 by 2021 is shown in the blue line.

Summary of the Impact of Increasing the Minimum Wage to $12.50

Figure III shows that in 2021 there will be 151,113 children living in households with directly and indirectly affected workers, or 28 percent of all children. Clearly, low-wage work affects a significant share of New Mexico’s children. Also, the prevalence of low-wage work in New Mexico inhibits household formation, marriage, and having children because minimum wage workers don’t have the financial resources to do so.

Impact of the Increase on Women and Men

Despite these odds, men will receive a slightly larger annual wage increase than women, as Figure IV-B shows. While men will earn $1,300 more, on average, women will earn $1,200 more. This reflects the different mix of industries and occupations in which men and women work, as well as the fact that the average wage increase for male workers who are affected is slightly higher than for female workers. 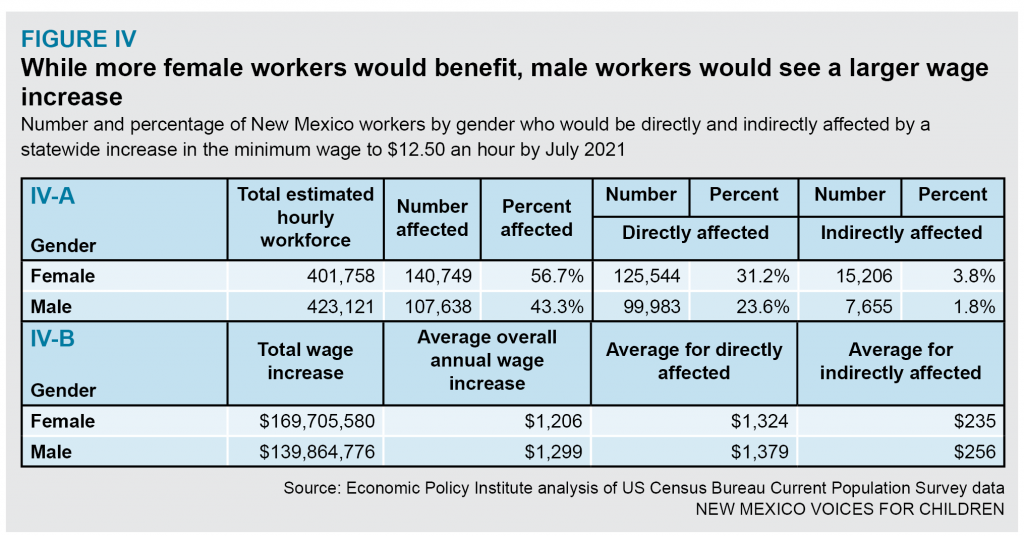 Most of the workers who will be helped by raising the minimum wage are adult workers, not teenagers. A common, but erroneous, perception about minimum wage workers is that they are by and large teenagers. Of the total 248,400 workers impacted by the minimum wage increase, only about 8.8 percent (21,800) are teenagers (younger than 20 years old). Figure V-A shows that about 66 percent of the affected workers (165,000) are age 25 and older, with 34 percent (84,800) over age 40. Even more telling, a significant proportion, 14.6 percent (36,500), are seniors―workers older than 55. One might visualize a greeter in a big box superstore, a senior working to make ends meet.

Figure V-B also shows that, of the 28,300 teenager in the workforce, 77 percent would be affected by the increase in the minimum wage. This is to be expected, since teenage workers will be at the lower end of the wage spectrum. Of workers aged 20 and older, an estimated 226,600 (28.4 percent) out of a total of 796,600 workers will be affected. 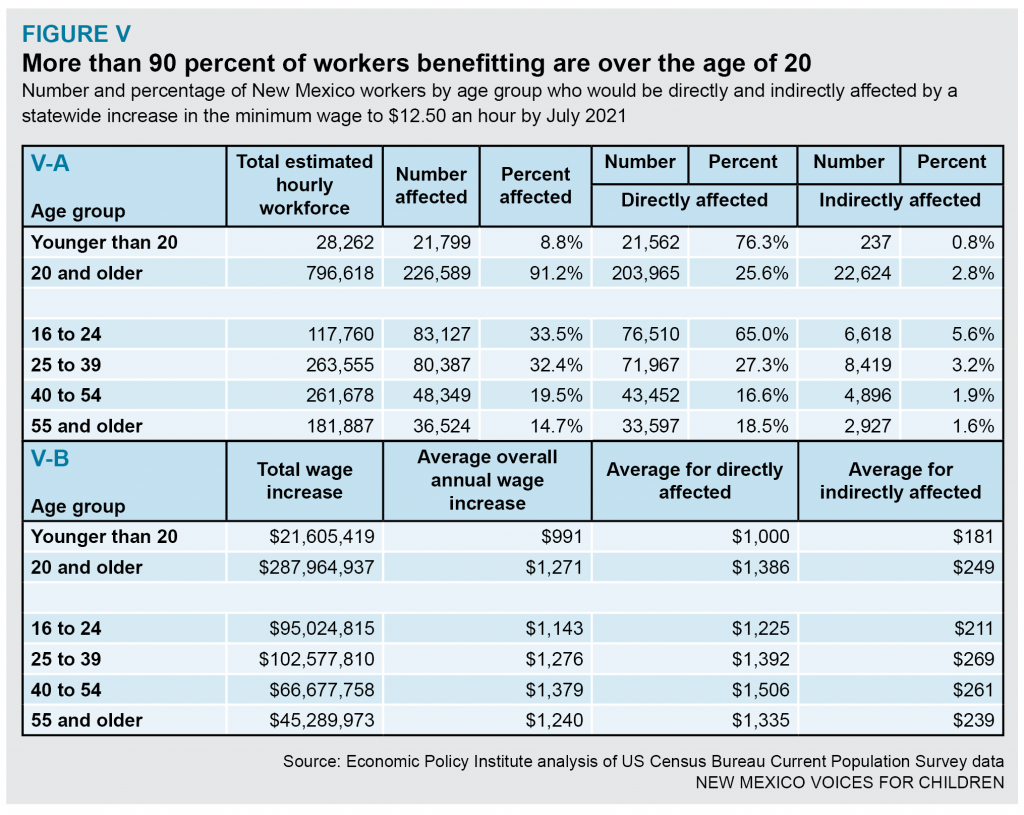 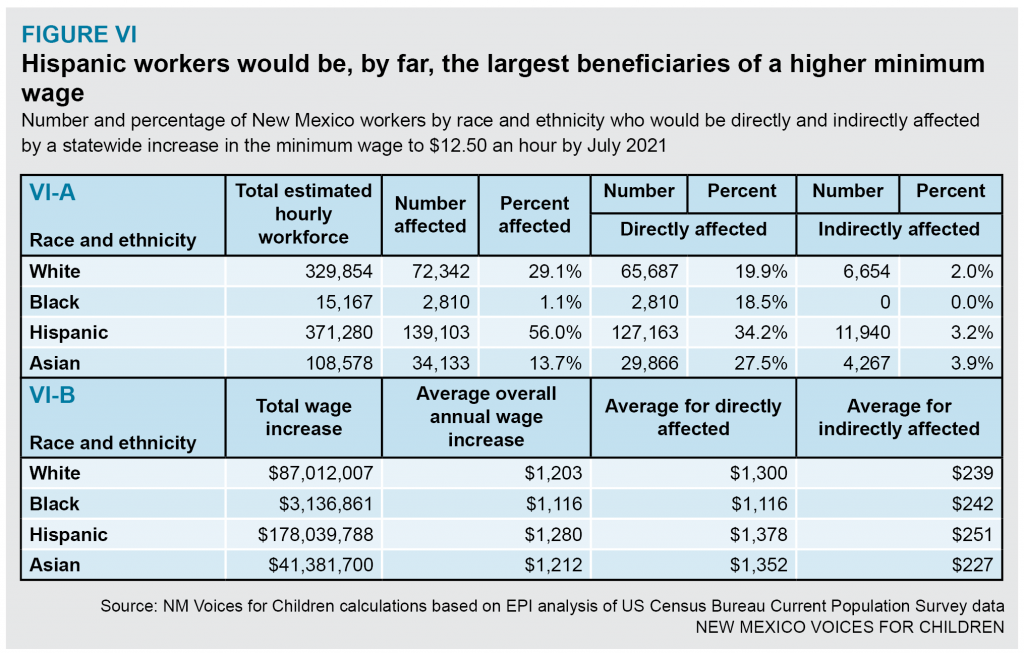 Impact by Marital and Family Status

Figure VII-A shows the distribution of those helped by a minimum wage increase by marital status. Almost 52 percent of affected workers are unmarried, with no children. This may be because low-wage workers are not able to afford the cost of marriage and children. A significant share of low-wage workers are married, but have no children (18.4 percent). Again, this may be because these workers feel they cannot afford to have children. They would also see the largest average wage increase (Figure VII-B). 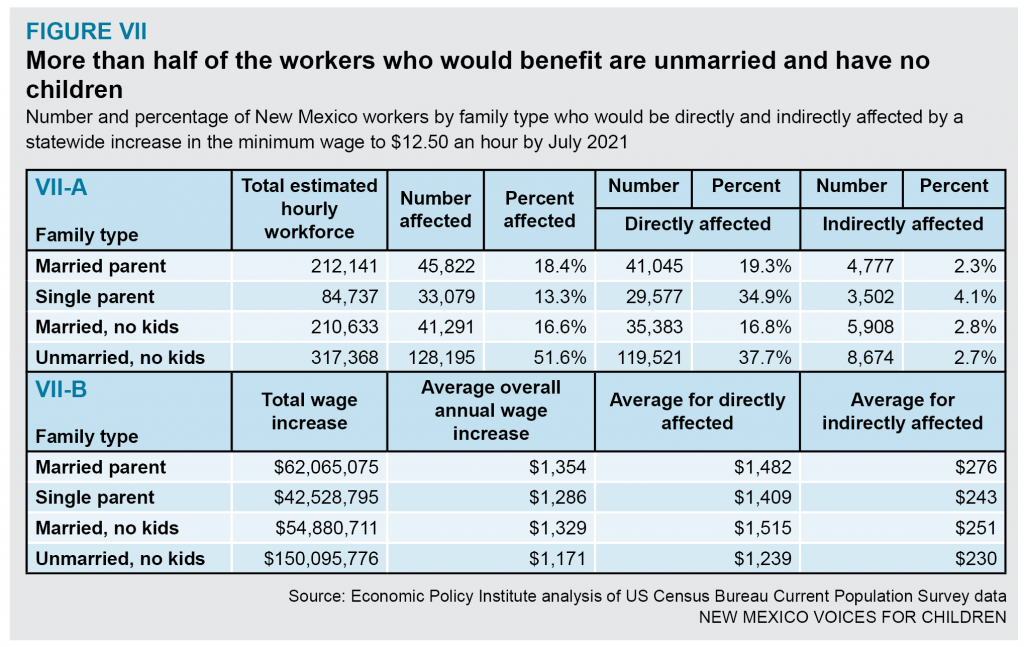 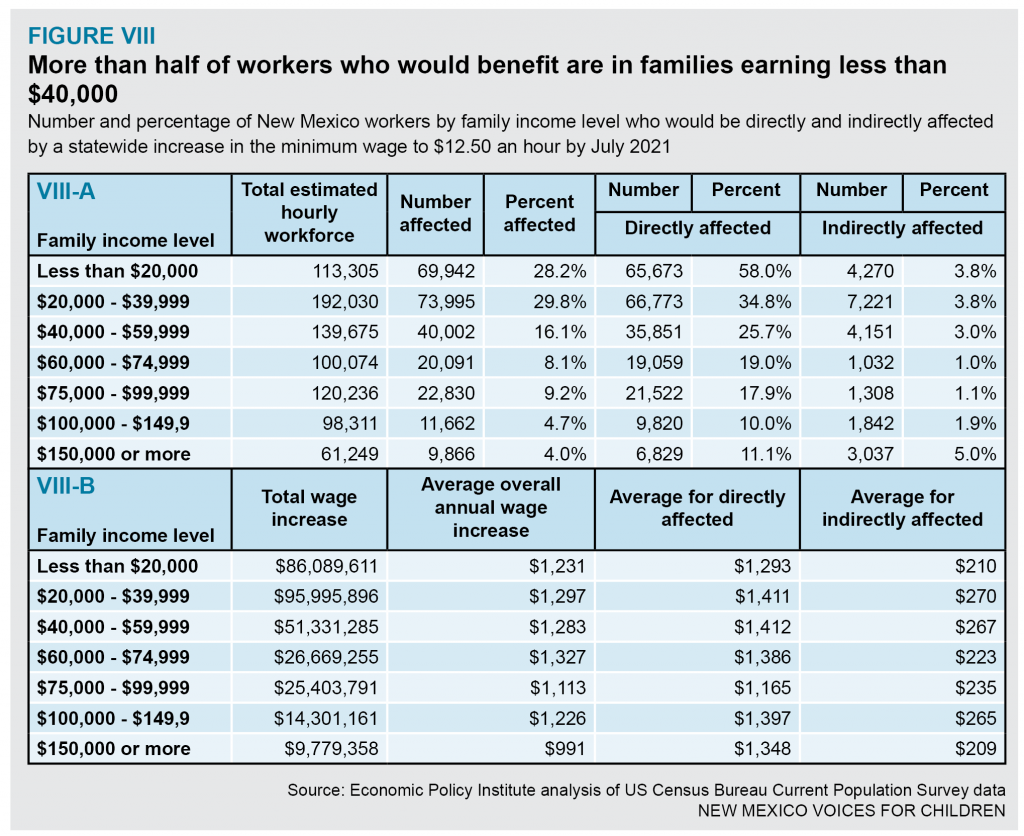 Figure IX-A provides an overview of workers by type of industry. As expected, the retail (17.5 percent) and leisure and hospitality (21 percent) sectors together account for a significant share (38.5 percent) of workers affected by raising the minimum wage. It is somewhat surprising to note that the education and health care sector accounts for 26.4 percent (65,700) of affected workers. Clearly, a significant share of workers in the health care field, the fastest growing sector in New Mexico’s slowly growing economy, are low-wage workers. 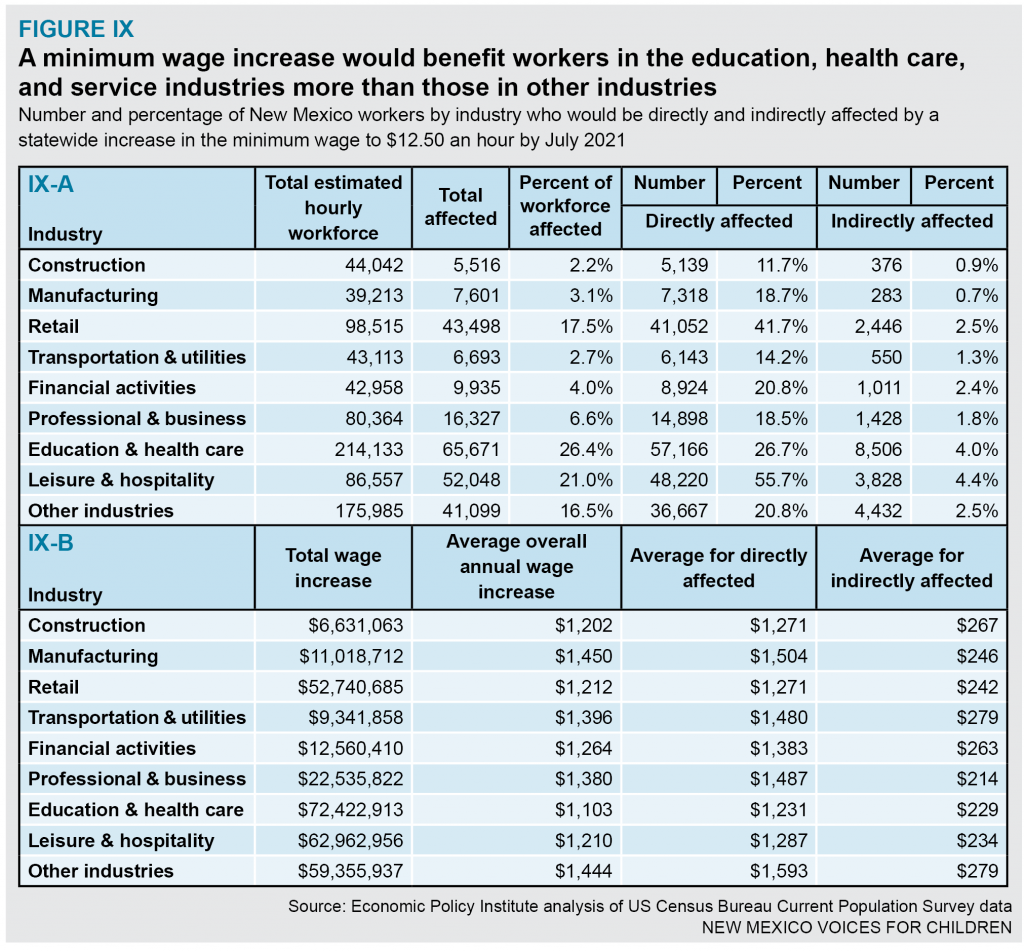 Impact by Occupation of Worker 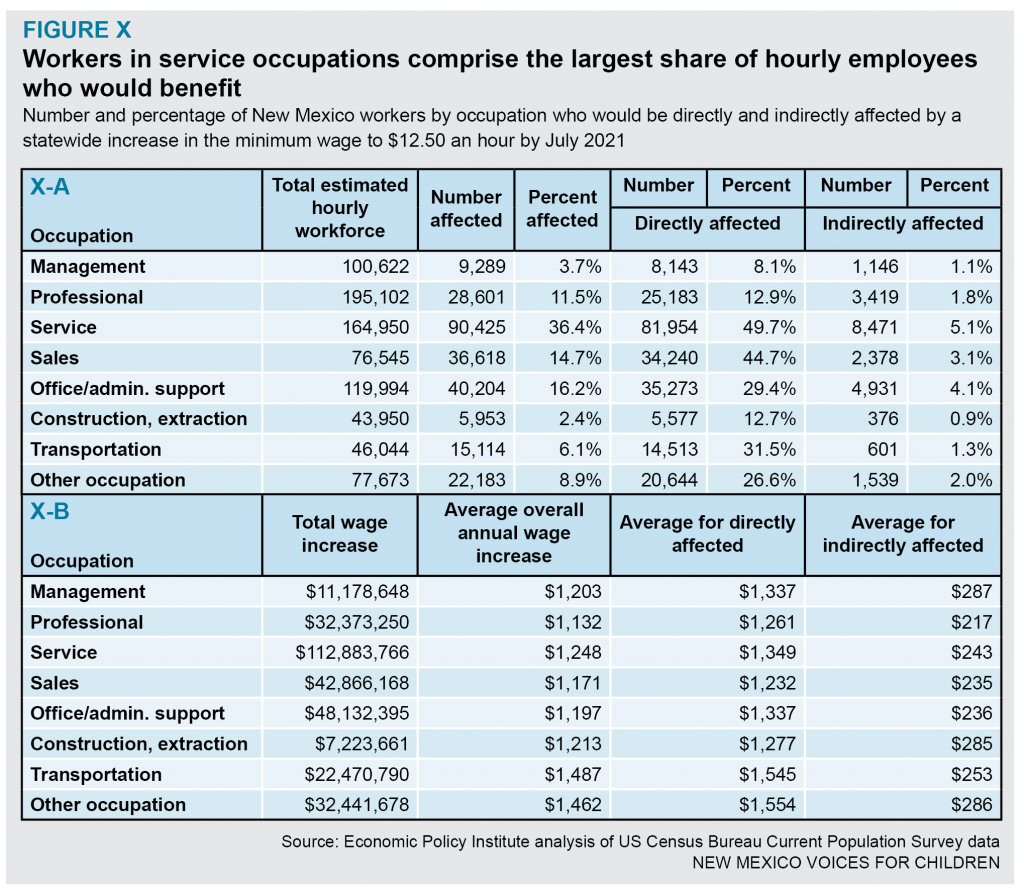 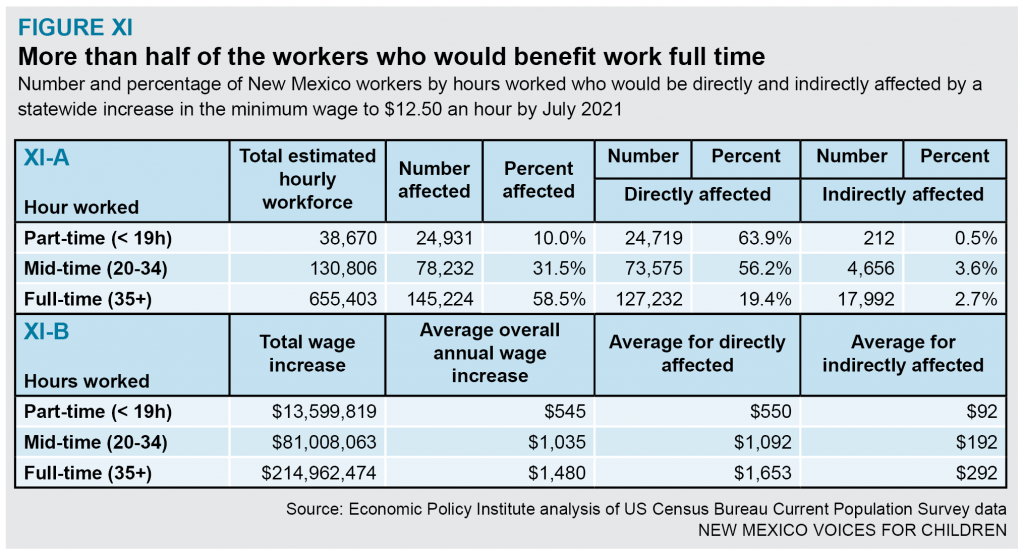 Figure XII-A shows that, as could be expected, low-wage workers are concentrated on the lower rungs of the educational ladder. Workers with less than a high school education (56,400 workers or 23 percent) and those with only a high school diploma (77,400 workers or 31 percent) accounted for about 54 percent of total directly and indirectly affected workers. It is disturbing to note that there were 94,100 workers with some college who will be affected by raising the minimum wage for almost 38 percent of the total. It is important to note that, due to the occupational structure of the state, workers with more education may end up working in low-wage jobs. In other words, more education is not a panacea for low-wage work. 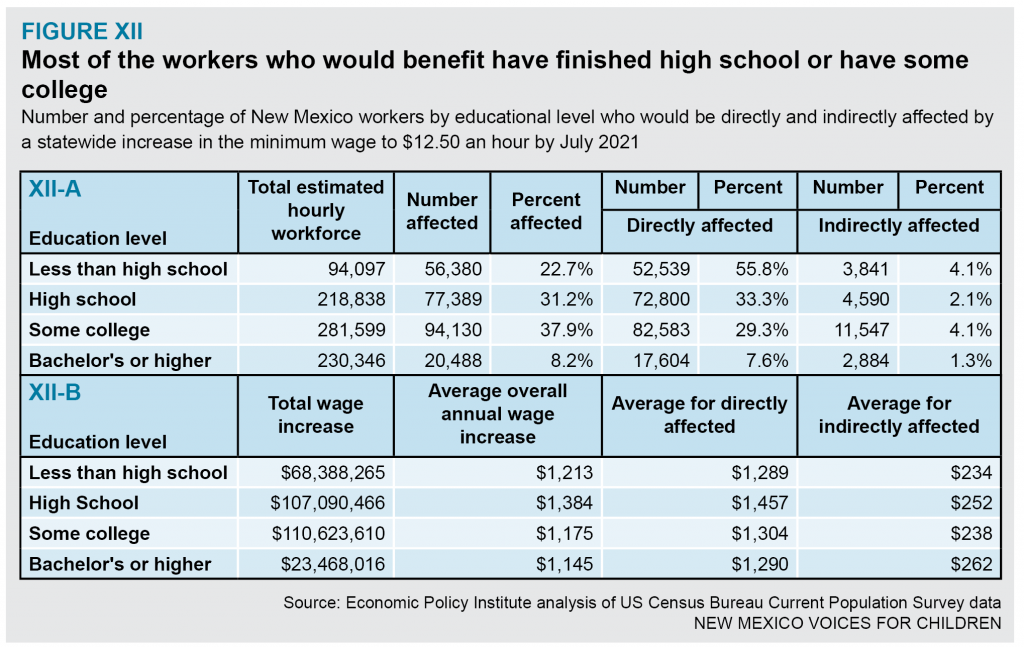 Impact by Ownership of Employer 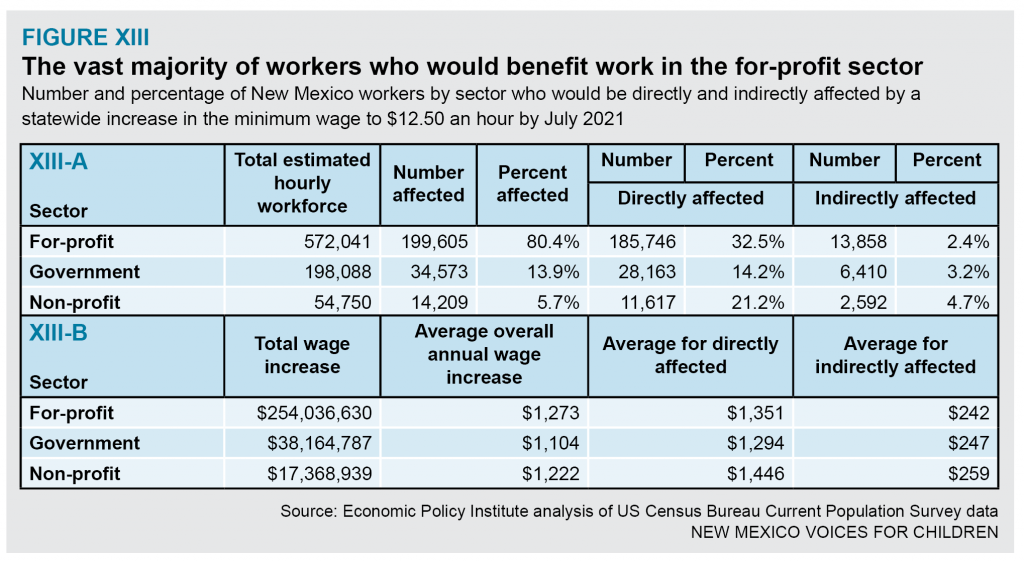