New Mexico faces something of a catch-22 when it comes to improving the educational levels of its workforce. The state’s workforce has lower-than-average levels of education, which has led to a higher-than-average percentage of low-wage jobs. Given our lower wage levels, our workers are less able to afford to get more post-secondary education. Hence, our state is less able to attract high-wage jobs.

New Mexico’s state government has long worked to make a post-secondary education readily available, and the state has an extensive system of universities, branch campuses, and community colleges to show for it. New Mexico has also kept tuition rates relatively low. That these measures have not translated into a well-educated workforce should be an issue of serious concern for policy-makers. When pursuing the answer, however, they must consider that the problem of workforce education begins long before New Mexicans reach working age.

In 1996, the state created a lottery scholarship for high school graduates. The scholarship covers a student’s tuition at a New Mexico university providing the student graduates from a New Mexico high school, begins college the following semester, and maintains a certain grade point average. The lottery scholarship was a great success in that it increased enrollment of new students. However, the state found that many of these students were academically unprepared for the rigors of college curriculum and many schools had to expand their remedial course programs. New Mexico’s high schools were not preparing their students for a post-secondary education even though they’d put a mechanism in place to pay for one.

If New Mexico’s young adults are not prepared to pursue a post-secondary education when fresh out of high school, it is not likely that those New Mexicans already in the workforce are any better prepared. They are also no longer eligible for the lottery scholarship and are more likely to have greater financial obligations—such as a family to support and rent or mortgage—than they did in their teens. For the high percentage of New Mexicans who do not graduate from high school, the odds of improving their economic situations as adults are even worse.

It is clear that in addressing the issue of workforce education and college affordability in New Mexico, policy-makers need to look at a multi-faceted approach.

When looking just at the percent of New Mexico adults aged 18 to 64 who were without a high school diploma or a GED (16.4 percent) New Mexico ranked even lower at 46th. Another 27 percent of adults had only a high school diploma, and about 30 percent had an associate’s degree or higher, ranking the state 39th by this measure. Given these rankings, it’s no wonder we have a difficult time recruiting high-wage industries to the state.

Language fluency and literacy are also problematic. A little more than 10 percent of New Mexico adults speak English “less than very well,” which is a definite barrier to advancing in the labor force in an English-speaking country. About 43 percent of adults function at the “basic” or “below basic” level of literacy. Another telling statistic is that only 34 percent of young adults aged 18 to 24 are enrolled in a post-secondary institution. New Mexico ranks 48th by this measure.

Job growth is inversely related to educational levels for the next several years, as job demand is shifting to jobs requiring a post-secondary education. Over the 2008 to 2018 period, the demand for jobs requiring post-secondary credentials will outpace jobs requiring only a high school diploma by almost 30 percent. Table I shows that New Mexico will add 43,000 jobs requiring non-secondary and secondary education. Sectors requiring workers with post-secondary preparation, including associate’s degrees, will add 58,000 jobs.
Table II shows that the number of high school graduates in the labor force pipeline will begin to decline over the 2010 to 2020 period, even as overall population—and one expects, employment—continues to rise. This shortage will put pressure on employers to increase wages. An emerging scarcity of workers should lead state policy-makers and the education system to better prepare the workers we have for the workforce. With a growing shortage of workers, productivity will also need to increase. Increased productivity will result from employers shifting to more “capital intensive” ways of producing goods and services—using machinery instead of workers—as workers become more expensive and valuable.

The condition of the labor market in New Mexico has been slack in the current recession, with supply outpacing demand, giving employers a bargaining advantage over workers on wages and benefits. The tightening of the labor market over time will give employees more of an edge. Non-traditional higher education students will become more prevalent as the labor market tightens and the need for higher productivity brings about more investment in the human capital (i.e. education and training) of an aging work force.

Higher Education and the Recession

As could be expected, higher education enrollment has risen rapidly during the current economic downturn. This results from students staying in school longer and workers returning to school to improve their employability. In New Mexico, however, enrollment far outpaced national growth rates. According to the State Higher Education Executive Officers (SHEEO) annual report, State Higher Education Finance, FY 2010, New Mexico higher education enrollment on a FTE basis rose by nearly one-quarter between FY05 and FY10 (from 79,219 students in FY05 to 89,450 in FY09, and 98,710 in FY10). Between FY09 and FY10 alone, there was a 10.4 percent increase in enrollment. In the country as a whole, FTE enrollment was up 14.9 percent between FY05 and FY10 and just 6.3 percent between FY09 and FY10.

Even as state expenditures by FTE were dwindling, overall higher education expenditures in New Mexico rose slightly (3.1 percent or by $83.1 million) between FY09 and FY12, from $2.709 billion to $2.79 billion. Higher education spending in New Mexico was shielded from the full force of the recession during these years because of an increase in federal funding and tuition hikes.

Overall, total state general fund revenues fell by one-fifth as the recession descended on New Mexico (from $6 billion in FY08 to $4.8 billion in FY09). In response, state general fund revenues directed to higher education dropped drastically—17.3 percent—between FY09 and FY12, a fall of $126 million (see Table III). Higher education revenues coming from ‘other state funds’— which includes tuition—rose from $1.307 billion to $1.364 billion (or 4.4 percent) as state policy-makers chose to shift the cost to students by raising tuition. 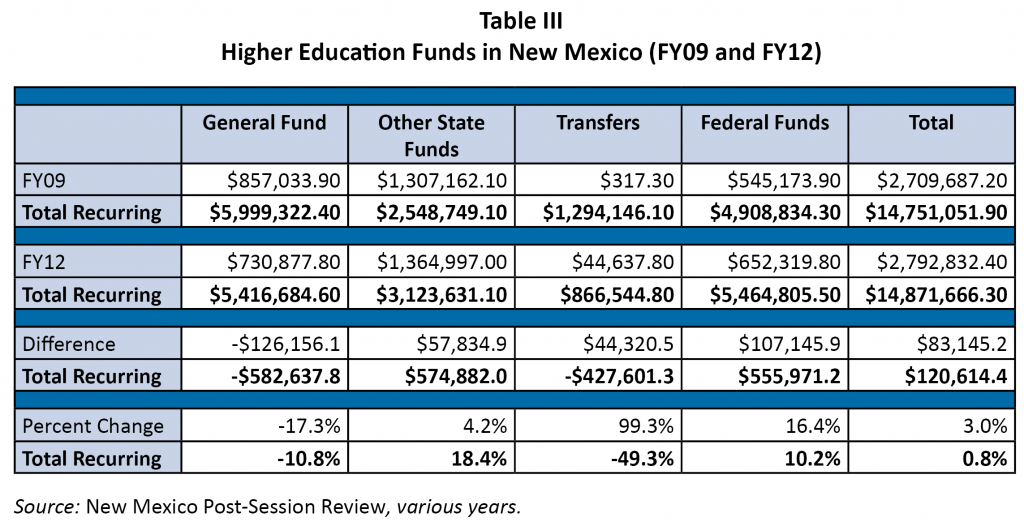 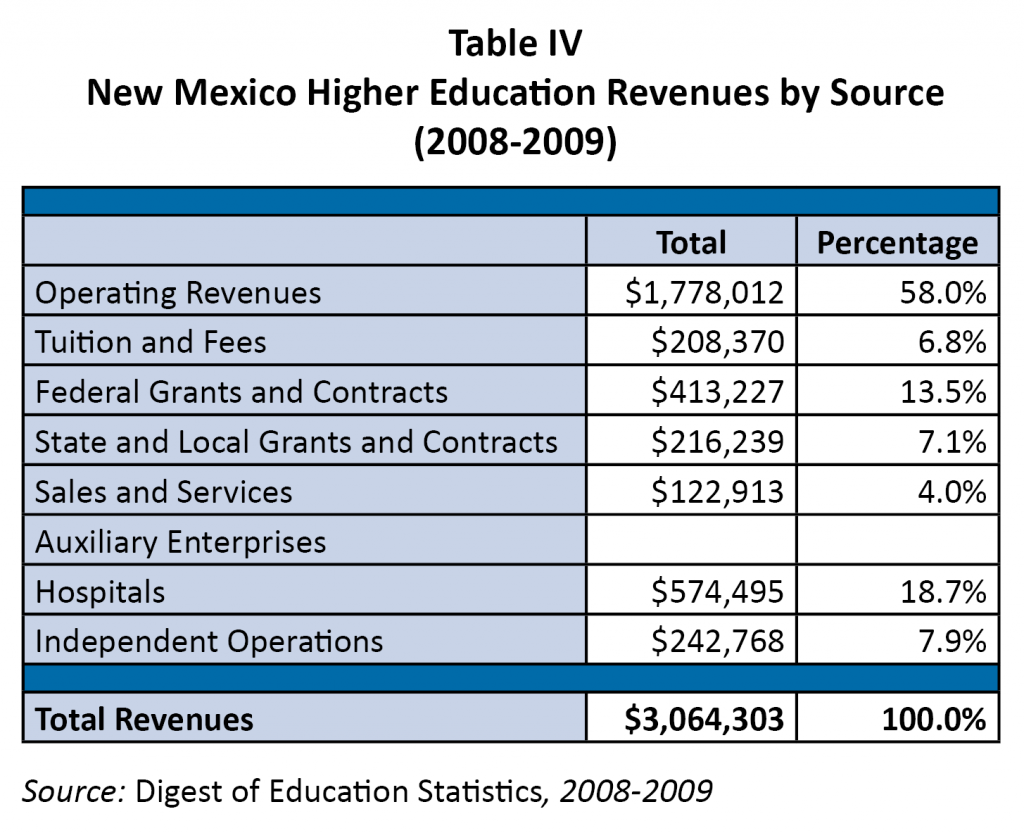 In New Mexico’s Title IV institutions, there were 14,639 people—about 83 percent of the student population—receiving financial aid. The average amount received was $4,448 (see Table V). Of that number, 8,514 (or 48 percent) were receiving federal grants with an average amount of $3,831. 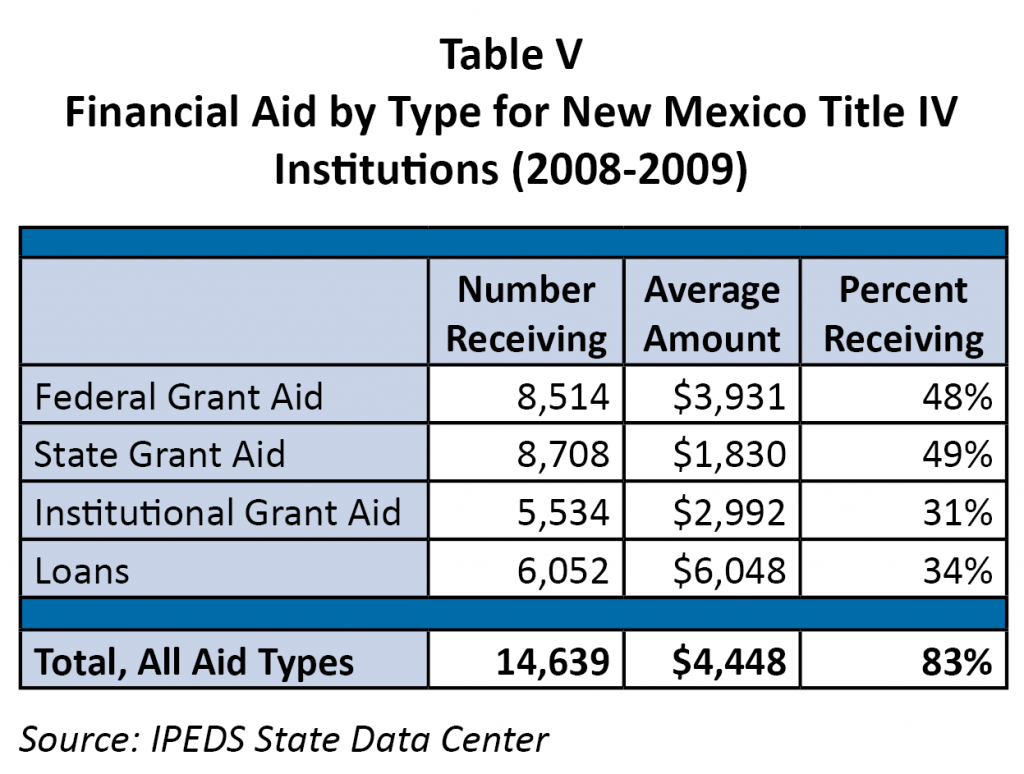 A Title IV institution is defined as: “an institution that has a written agreement with the

[US] Department of Education that allows the institution to participate in any of the Title IV student financial assistance programs…” There were 41 Title IV higher education institutions in New Mexico in 2008-09: 28 public, three private non-profits, and 10 private for-profit schools.

Solvency of the Lottery Scholarship Program and Fund

The Legislative Lottery Scholarship Sustainability NM Higher Education Model (see Appendix IV) compares the Lottery Scholarship fund balance at the beginning of each fiscal year. Each panel of the table shows the fund balance at the beginning of the fiscal year, the lottery income, interest on the fund, expenditures, and ending balance for the fiscal years between 2009 and 2014. In the first two years, the change was fairly gradual. However, even with no tuition increases, the fund would be on the verge of depletion at the present rate of expenditure by the end of FY14. The Higher Education Model shows that, at the end of FY14, the fund would be in deficit by $9.4 million with a tuition increase of 5 percent; $13 million with a tuition increase of 7 percent; and $16.6 million with tuition increase of 9 percent.

Despite the lower rates of tuition and the prevalence of financial aid programs, the cost of a post-secondary education is still out of reach for many New Mexico workers, particularly when the cost of child care and lost wages are figured in.

The Basic Economic Security Tables for New Mexico, a project of Wider Opportunities for Women’s (WOW) economic security programs, provides an estimate of the cost of adult education and training expenses. The estimate is for three categories of workers—two with small children and one without—for a statewide average of the cost of community college education. According to this report, community college degrees commonly boost earnings by 20 to 30 percent.

For one single full-time worker who attended a New Mexico community college half time in 2010 the annual cost was $1,032, totaling $4,128 over four years. For a worker with an infant (not an unusual situation) the annual cost was $1,814, or $7,258 for four years. The cost rises to $2,591 a year and $10,362 for a 4-year program for a single worker with an infant and a preschooler. The cost of community college education should also include the income foregone by dropping hours worked by half. Given these circumstances, the cost of attending community college is fairly high, and probably constitutes a barrier for most working parents.

At least one-fifth of all New Mexico families had incomes lower than $25,000, according to Working Poor Families Project special data runs from the US Census’ American Community Survey. A family income below $25,000 represents economic hardship. Another 52,000 families, or nearly 10 percent of total families, had incomes between $25,000 and $35,000, which is certainly a level of income that indicates economic stress. Attendance at community college and working part time may be simply beyond the reach of many lower-income families. And if lower income is defined as less than $35,000, this represents almost one-third of New Mexico families.

Since New Mexico already makes a very large investment in post-secondary education, there is a disconnect between amount of money spent and outcomes in the way of an educated work force. Even given the state’s level of investment, a college education may still be too costly, particularly for our lowest-income workers and workers with young children. The need for remedial courses may prolong the time a student spends in college, which will drive up costs. Such students may also conclude that a post-secondary education is simply beyond their reach intellectually because they did not receive the necessary background in high school.

One way New Mexico could improve affordability for low-income workers is to expand the College Affordability Fund, which provides tuition assistance to those who have been out of school for more than a year and may not qualify for a merit scholarship. Eligibility could be broadened in a number of ways:

Given increases in tuition, the Lottery Scholarship is quickly running out of funding. Changes should be made so that it better serves the students who need it most:

Policies to make college more affordable for working adults must include increased child care assistance. Parents must have safe, reliable and affordable child care not just for the hours they are in class, but for necessary study time as well. However, budget shortfalls due to the recession have taken a heavy toll on New Mexico’s child care assistance program. Currently, only families living in deep poverty are eligible for new enrollment in the program. Those who would have been eligible just a few years ago have been placed on a waiting list, which has grown to include several thousand children. Child care assistance should be expanded in a number of ways:

Employers could be engaged in retaining and improving their workforce by investing in their workers’ education. The state should encourage an expanded use of successful job training incentive programs and work-skill development programs to expand the flexible skill base of their employees. This can not only serve to help employees pay for higher education, but can lead to higher wages for the worker as well as build capacity for the employer to expand the services they offer. Employer-based training can be linked to post-secondary education in a number of ways: