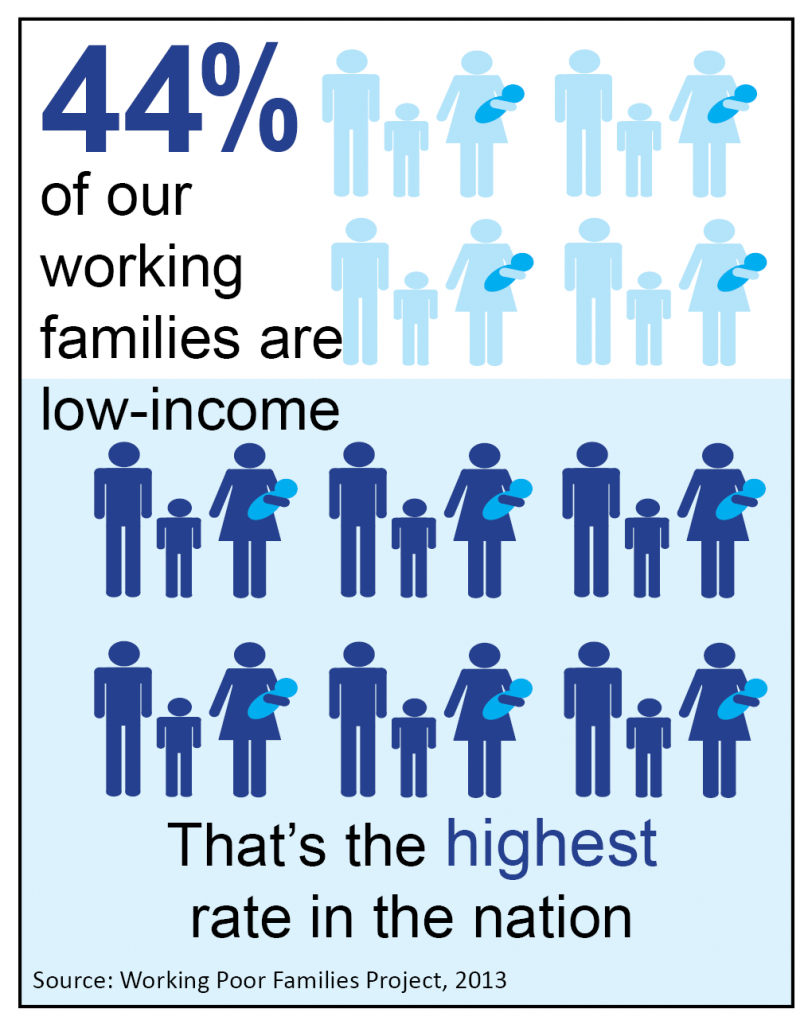 New Mexico’s Legislature is currently debating whether to raise the state minimum wage to $8.50 an hour and index it so that it keeps up with rising prices. Two recently released national studies placing New Mexico at the bottom of the 50 states in economic terms offer state lawmakers some very compelling reasons to do so.

One report1 ranks New Mexico tops in the percentage of working families that are low-income. Almost 45 percent of our working families are “working poor.” Only two other states—Mississippi and Arkansas—break the 40 percent mark. The other report2 ranks New Mexico tops in income inequality—that’s the income gap between the richest and the poorest households. In New Mexico, the wealthiest fifth have nearly ten times the income as the poorest fifth.

There are many other reasons to raise and index the state’s minimum wage, and New Mexico Voices for Children has looked at several of them. In one report,3 we showed that states that have higher minimum wages than the federal minimum are suffering no negative economic or job growth impacts. In this analysis, we look at the impact an increased and indexed minimum wage would have on economic opportunity for New Mexico’s lowest paid workers.

The value of a wage increase is eroded if that wage fails to rise as the cost of living goes up. As Graph I shows, New Mexico’s current minimum wage of $7.50 an hour will have the buying power of just over $6 an hour in 2020 if it is not increased. Just since 2009, when New Mexico increased the minimum wage to $7.50, about 10 percent of the value of the minimum wage has been lost due to inflation. That’s an average annual loss of more than $1,000 for a full-time minimum wage worker. When the minimum wage is indexed to the Consumer Price Index (CPI) automatic adjustments keep it from losing value over time. 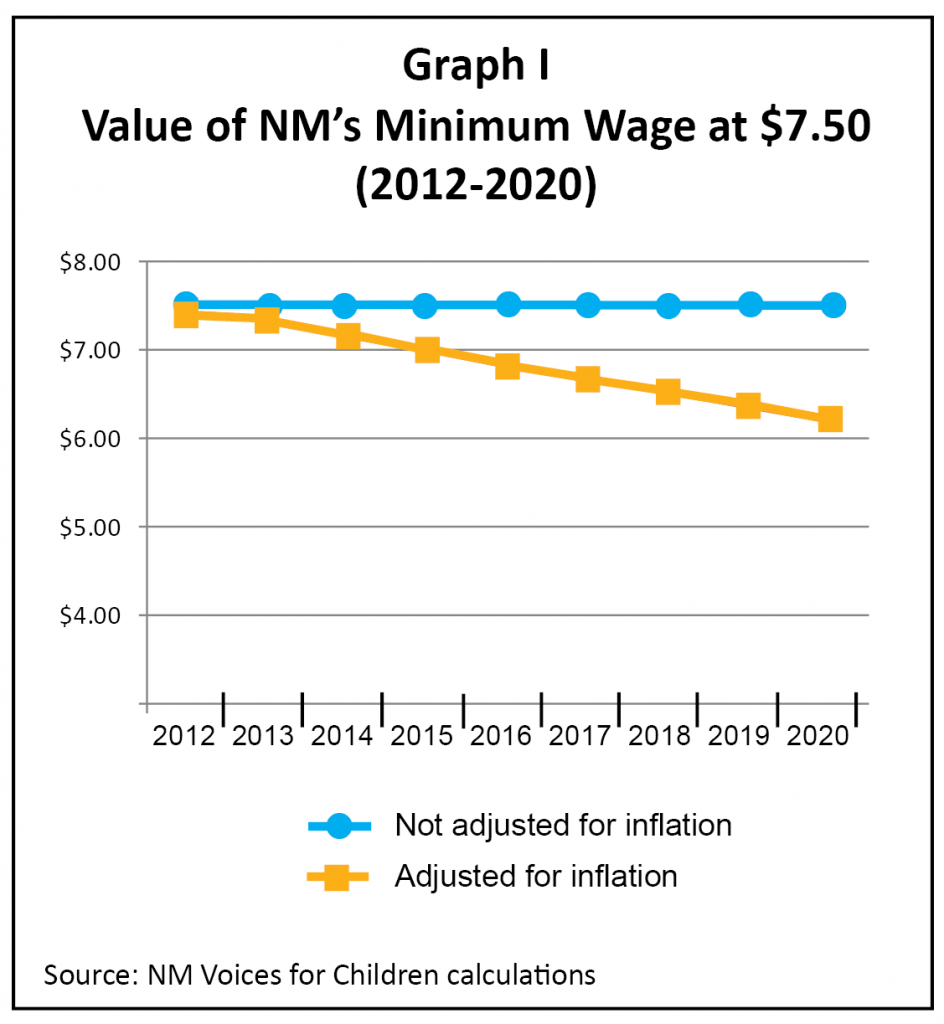 Poverty is one of New Mexico’s most severe problems. Raising wages is a critical step towards ending poverty. The hourly wage required to bring the income of a family of three up to the federal poverty level is $9.25. Raising the New Mexico minimum wage to $8.50 an hour and indexing it the CPI would add about $2,000 to a working adult’s annual income, bringing a family of three closer to—but still below—the federal poverty threshold.

An additional $2,000 per year would help working people pay for the transportation or child care necessary to hold a job, as well as other essentials such as housing costs. Only those working full time would see the extra $2,000. When we take an average of hours worked by both full- and part-time employees, the increase would be $1,080 for workers directly impacted by the wage increase and $280 for those workers indirectly affected. Even the increase based on average hours would be a significant wage boost for hard-working New Mexicans. 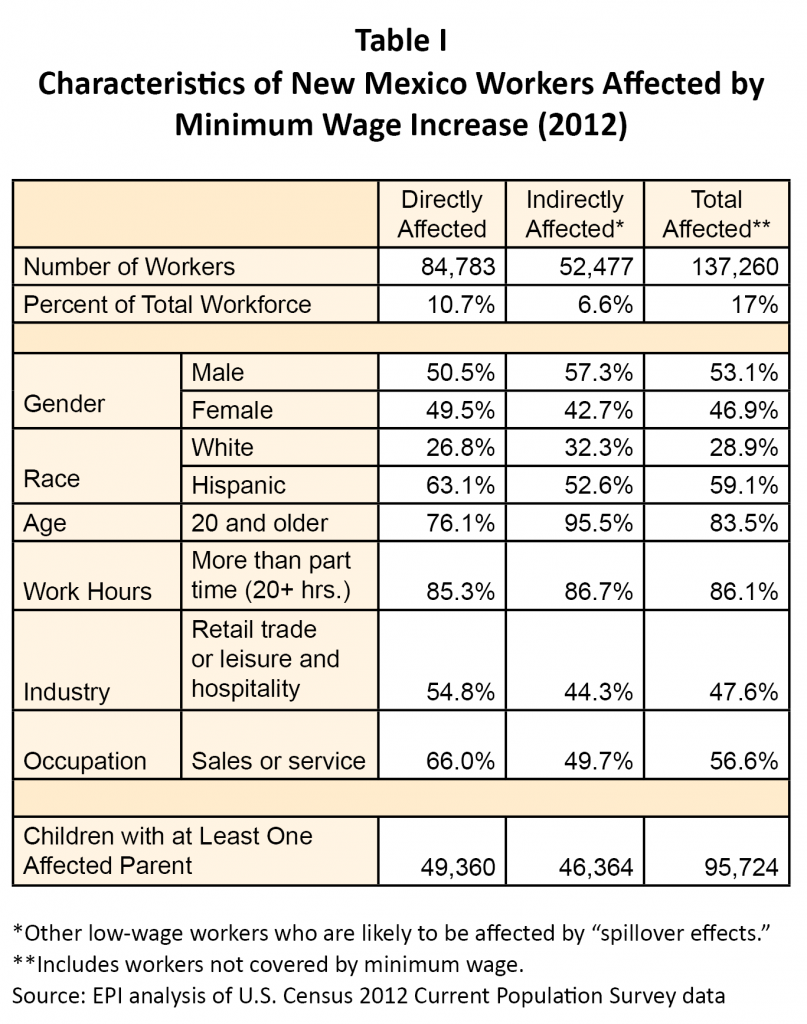 The vast majority (76 percent) of working New Mexicans who would benefit from the raising and indexing of the minimum wage are adults. Most of those (85 percent) who would be affected work more than part time, and most (63 percent) are Hispanic.

Finally, there are 95,700 children living in families with at least one parent who would be affected by a minimum wage increase (see Table I). That’s nearly one-fifth of the total child population.

About 60 percent of the families that would benefit from an increase in the minimum wage have a family income less than $40,000. About two-thirds of low-wage workers have a high school education or less (see Table II).

In addition to benefitting the workers who receive a larger pay check, the economy as a whole will benefit from a minimum wage increase. Estimates from the Economic Policy Institute show that increasing the state minimum wage to $8.50 would mean $105 million in new wages for low-wage workers. A minimum wage increase results in a modest positive economic impact because the vast majority of the additional wages will be spent in New Mexico. Those additional wages will lead to an increase of $67 million to the state’s gross domestic product and create 590 new jobs (see Table III).