During the 2013 legislative session, duplicate bills—HB-369 and SB-368—were introduced to drastically overhaul the state’s tax system. The bills would have eliminated personal and corporate income taxes, lowered the state’s consumption tax to 2 percent, and added a 2 percent tax to wages and salaries. While a flat tax system such as this seems fair superficially, it would result in a more regressive state tax system that would weigh even more heavily on those New Mexicans with the lowest incomes. This legislation did not pass in 2013, but it is almost guaranteed to make an appearance in subsequent sessions—and it should be stopped.

Bills HB-369/SB-368 would overhaul the New Mexico tax system in the following ways:

New Mexicans in the bottom income brackets already pay a higher share of their incomes in state and local taxes than do those in the top income brackets. The yellow bars in the graph below show the share of income paid in state and local taxes by each income level. The various types of taxes are illustrated by the blue, red, purple, and green bars. The blue bars—representing sales taxes—are by far the most regressive. Even though the purple bars—representing state income taxes—represent a net gain for low-income New Mexicans, it is not enough to offset the overall regressivity of the other taxes. A flat tax system like HB-369/SB-368 would result in an even more regressive tax system. Furthermore, since the state’s Taxation and Revenue Department was unable to evaluate how these bills would impact state revenue, it is unclear if it would bring in enough money to fund necessary programs and services—like education, health care, and public safety—at their current levels.

Given that New Mexico already has the highest rate of income inequality in the nation, the highest percentage of working families that are low-income, and the lowest ranking for child well-being, these kinds of bills should not be passed if they reappear in future legislative sessions. 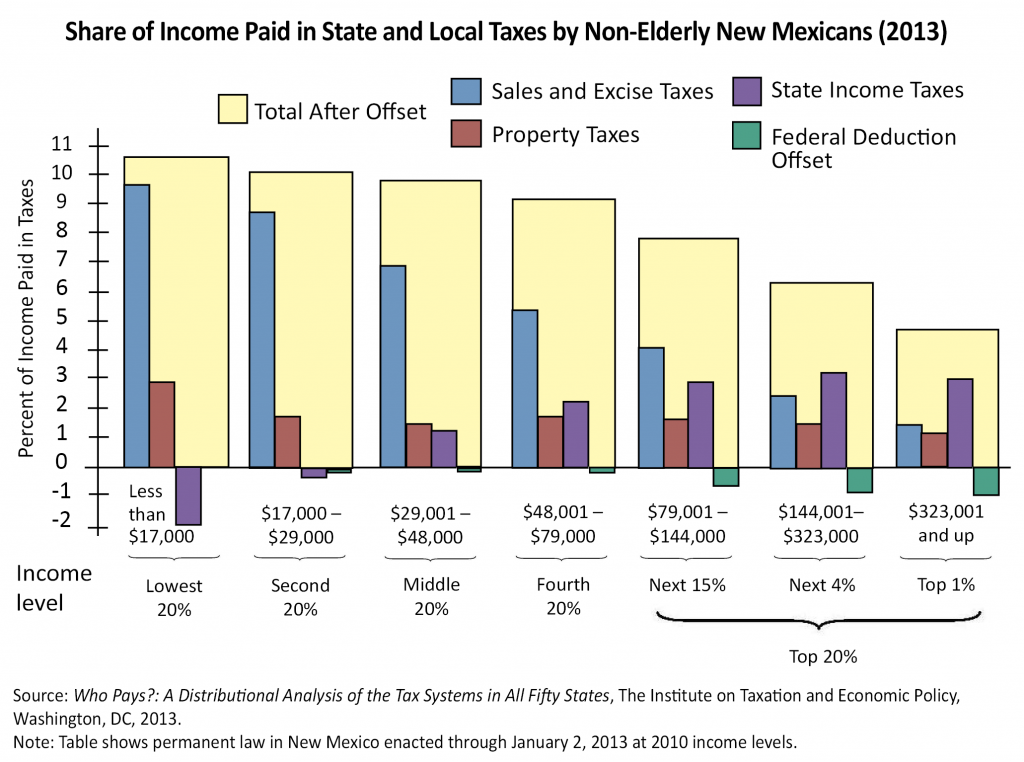