In 2003, the state Legislature passed a bill that allows New Mexicans to deduct half of their capital gains income when they file their personal income tax forms. The legislation exemplifies two significant problems with the state’s tax system: it is a burden on those with the lowest incomes, and tax laws are not later reviewed to determine if they are having the desired effect. It also points to the ineffectiveness of using tax cuts for the wealthy as an economic development tool. For these and other reasons, this deduction should be repealed.

The capital gains deduction, coupled with legislation that cut the top personal income tax rate nearly in half, was sold to the Legislature and the public as a potential job creator. The state’s new, low tax rates, New Mexicans were told, would bring high-income earners to New Mexico, and they would relocate their corporate headquarters here as well. The result would be an influx of new jobs.

Neither the legislation, nor the advertising campaign that followed (which included a billboard in Times Square proclaiming that New Mexico was “open for business”) has had any demonstrable economic development impact. Much of the job growth that New Mexico did see over the next several years was due to the construction boom brought on by the housing bubble. What the tax breaks did do is starve the state’s general fund—its budget for public schools, health care, public safety, and other important programs—of hundreds of millions of dollars over the last decade. It also made an unfair tax system—one in which those with the lowest incomes pay the highest tax rates—even less fair. Since the lion’s share of capital gains income goes to those in the top income tax brackets, it represented a windfall for that small group of New Mexicans. But it was paid for by everyone else.

As a state that consistently has one of the highest rates of poverty, New Mexico should structure its tax code to help low-income families, not hurt them. When income earned as wages and salaries is more heavily taxed than unearned income like capital gains, the tax system is favoring those who least need the help. What’s more, the money New Mexico loses to this special tax break would be more effectively invested in proven job creators such as well-maintained infrastructure and a cradle-to-career education system that produces a highly qualified workforce.

This analysis, based on 2011 data, demonstrates that repealing the capital gains deduction could yield $28 million for the state general fund. An analysis1 by the Legislative Finance Committee staff for a recent bill estimates that the state could gain as much as $45 million in 2015 by repealing the deduction.

Income and its Distribution in New Mexico

A capital gain is the profit that results from the sale of a capital asset such as a stock, bond or real estate, when the sale price is higher than the purchase price. The gain is the difference between the lower price at which the asset was purchased and the higher price for which it was later sold. A capital loss results if the purchase price was higher than the eventual sale price.

Federal income tax returns from 2011—the most recent year for which data from the Internal Revenue Service are available—were examined for this report. (Analysts must rely on IRS data because New Mexico has not published any data on its personal income tax since 2005. This is a serious transparency problem and a challenge to those who would analyze the cost of any income tax provision, not just capital gains.) By examining the federal income tax returns for New Mexico, it is possible to estimate not only the cost of the capital gains deduction, but how the benefit from that tax break is distributed—in other words, how many New Mexicans benefitted and in which income brackets they were concentrated.

Graphic II shows how the state’s total income of $41.8 billion was distributed. The 70 percent of tax filers at the bottom of the income scale (earning up to $50,000) received only 31 percent of the total income. The 20 percent of the filers in the next bracket (between $50,000 and $100,000) reported almost as much income (30 percent) as the much larger group below it. All of the rest—nearly 40 percent—of the state’s income went to the small group at the top (with incomes of $100,000 and up)—representing just 10 percent of all returns.

While the state’s personal income tax is slightly progressive—meaning the tax rates increase as income increases—the overall system is regressive. When other state and local taxes are figured in, the system is quite regressive,2 as shown in Graphic VII. The New Mexicans in the bottom 20 percent—those earning less than $17,000—pay more than 10 percent of their income in state and local taxes. Thanks in part to our generous capital gains deduction, New Mexicans in the top 1 percent—earning more than $323,000—pay less than 5 percent of their income in these same taxes. Clearly, they are the last group to need tax relief.

What We Got for $28 Million

There is no evidence that the capital gains deduction created one job in New Mexico, let alone enough jobs to raise as much revenue as the cut cost. In fact, numerous studies3 have shown that cutting taxes for the wealthy is not a good economic development strategy, in part because the cuts are poorly targeted. The wealthy can do whatever they want with their windfall tax break. Certainly, some will choose to make business investments that may lead to job creation, but they are also free to park it in the bank, spend it in another country’s economy while on vacation, or tuck it away in an off-shore account. Nor is there evidence that tax rates impact where the wealthy choose to live. Other quality-of-life concerns, such as climate, culture, and family roots have significantly more influence. Simply cutting taxes for the wealthy or profitable corporations as a way to “create” jobs makes as much sense as casting seed corn to the wind and hoping enough of it sprouts that you can feed your family next year. 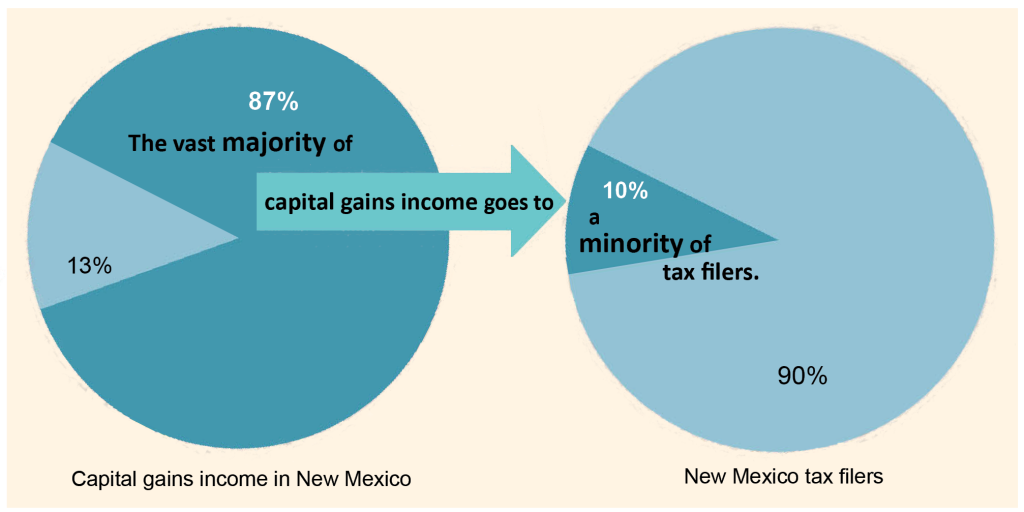 For tax incentives to work as an economic development tool, they need to have accountability built in, such as performance requirements, and they need to be targeted. They also need to be studied for effectiveness and revised or repealed if they are not having the desired impact. New Mexico does a very poor job of adding up its many tax expenditures, let alone determining if they are of any economic development value. Most states, and the federal government, create an annual tax expenditure report that tallies how much revenue is being foregone through tax credits, deductions, and exemptions. The most effective reports also analyze various tax expenditures so the legislative and executive branches know how they are performing. New Mexico does not.

The Legislature has passed bills requiring tax expenditure budgets on three different occasions, but all were vetoed. The tax expenditure reports that were the result of executive orders in the wake of the vetoes were neither comprehensive nor contained any useful analysis. Interestingly, the report released in 2013 did not include the cost of the capital gains deduction—although it did include the costs for some tax expenditures for low-income tax filers. As this information is readily available to the department responsible for the report, the fact that it is conspicuously missing demands an answer as to why.

Direct government spending—in the form of salaries for employees and contractors, and to purchase goods—does a much better job of creating jobs. For the $28 million New Mexico spent on capital gains deductions in 2011, the state could have hired 560 teachers or provided 6,000 children with health care under Medicaid. The salaries for those teachers or doctors and other health care workers would have then created jobs as they were spent in the community on groceries, gas, and other necessities. Such spending not only creates jobs in the short term, but evidence has clearly shown that preparing children for school yields long-term benefits and that the most effective economic development strategy for a state is ensuring an educated workforce is available.

The deduction of 50 percent of capital gains income from state income tax should be repealed. All capital gains income should be subject to state income tax, just as all wages and salaries are. Tax cuts that are alleged to be economic development tools should be subject to performance and other accountability requirements or should automatically sunset after a number of years. The state should also create a comprehensive tax expenditure report that accounts for all tax credits, deductions, and exemptions, and analyzes them for effectiveness. Those that are not delivering as promised should be revised or repealed. New Mexico should use any money recouped from ineffective tax cuts to invest in the state’s human capital by expanding funding for early childhood care and education programs, K-12 and higher education, and worker training. The Working Families Tax Credit, which puts money back in the pockets of low-income families, would be another targeted use of tax expenditure dollars that would generate economic activity.

New Mexico’s special treatment of capital gains income—like the discredited trickle-down theory on which the legislation was based—has been bad for New Mexicans. It has had no beneficial impact on the state’s economy, made an already regressive tax system more unfair, drained hundreds of millions from the state budget that could have been spent in much more productive ways, and contributed to the state’s high rate of income inequality. As the vast majority of capital gains income goes to those who already earn the most money, high-income taxpayers get a tax break not available to low- and middle-income taxpayers. This wasteful tax break is also a good illustration of the need for New Mexico to establish a regular process for reviewing tax breaks.

1 Fiscal impact report for SB-639, 2013
2 Who Pays? A Distributional Analysis of the Tax Systems of All Fifty States, Institute on Taxation and Economic Policy, 2013
3 Academic Research Lacks Consensus on the Impact of State Tax Cuts on Economic Growth, Michael Mazerov, Center on Budget and Policy Priorities, June 2013