by Gerry Bradley, M.A.
An analysis of studies from other states shows that the voter photo ID legislation under consideration by the New Mexico Legislature during the 2012 session was unnecessary and would likely have cost taxpayers more than $1.2 million per year or $3.5 million over the following three years. This added expenditure would have been imposed just as the state was emerging from four years of deep budget cuts. Though the measures failed this year, voter ID legislation is likely to be introduced in the 2013 legislative session.

This analysis of the cost is drawn from studies by several other states. The annual cost of $1.2 million is considerably more than the amount estimated by the New Mexico Secretary of State’s office in response to a similar bill in 2011.

New Mexico, with 936,8281 registered voters, already has a voter ID requirement. Identification is required at registration, although a variety of forms are allowable under current state law. It is a felony to impersonate another voter to cast a ballot at the polls and voter fraud is extremely rare.

The voter ID bills that were introduced in the 2012 legislative session would have required voters to produce a photo ID at the polls in order to cast their ballot. As voter photo ID laws have the effect of posing unnecessary barriers to participation for many voters, they are most often looked at as attempts at voter suppression.

This notion is reinforced when one considers the groups likely to be most affected by photo ID laws. The Brennan Center for Justice has found that veterans, the elderly, and persons with disabilities are the groups most likely to be prohibited from voting because they have no photo ID. Low-income voters and those in rural areas would also be especially affected. Native Americans, Hispanics, and African Americans are less likely to have photo identification than whites. Voting is a civic duty and a constitutional right, and New Mexico voters should be encouraged to participate in elections—not discouraged by burdensome and unnecessary requirements.

The cost of implementing a voter photo ID law can be broken down into three categories: the cost of voter education campaigns, the cost of the actual ID, and the administrative expenses.

Voter photo ID laws require aggressive publicity efforts to inform voters and ensure that they aren’t turned away at the polls. New Mexico’s educational cost would be $750,000 annually or 80 cents per voter. Over three years the cost would be $2.2 million. In North Carolina the cost of publicity was estimated at 80 cents per registered voter. Elsewhere, per-voter costs range from 15 cents in Texas and $1.37 in Missouri.

One of the problems with a voter photo ID act is that it can amount to a poll tax if the voter is expected to pay for an ID they would otherwise not require. Poll taxes—or making people pay for the right to vote—are a violation of civil rights laws. Studies show that between 7 and 11 percent of citizens don’t have a photo ID. New Mexico residents can apply for a non-driver photo ID from the state’s Motor Vehicle Division at a cost of $10 or $18, depending on how many years it is valid. Passports are another form of government-issued photo ID, but they are significantly more expensive and can take months to process.

Were a voter photo ID law implemented in New Mexico, the state should bear the cost of issuing the ID in order to avoid almost certain lawsuits. Whether the state pays for the IDs or not, demands on New Mexico’s already overburdened MVD personnel and computer system will most certainly go up. New Mexico’s cost would be $187,000 annually or 20 cents per voter. This would amount to $562,000 over three years. North Carolina estimated the cost at 20 cents per voter per year. Elsewhere, per-voter costs range from 3 cents in South Carolina to 28 cents in Missouri.

Voter photo ID laws add dozens of new administrative costs for state and local officials, from updating forms and websites to hiring and training staff to inspect photo IDs and handle the inevitable increase in provisional ballots on Election Day. New Mexico’s cost to implement voter photo ID cards would be $234,000 annually or 25 cents per voter per year. Over three years the cost would be $702,000. North Carolina estimated this cost at 25 cents per voter and Minnesota estimated the cost at 15 cents per voter. 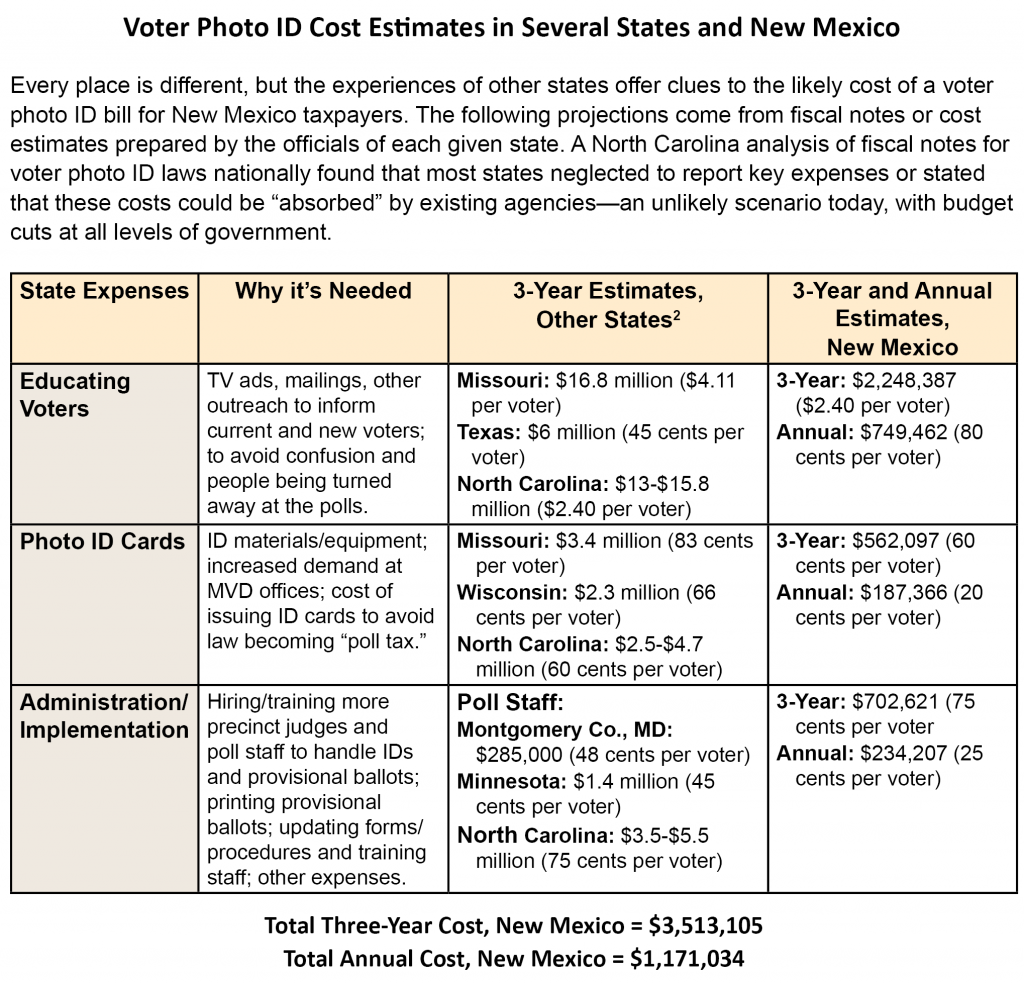 Adding the costs for educating voters, providing ID cards, and additional administration results in an estimated total cost of $1.2 million annually or $3.5 million over three years in New Mexico. A voter photo ID law is a superfluous and expensive solution to a nonexistent problem. The state should be making exercising the constitutional right to vote easier, not more difficult.