Mind the Gap: Unemployment, Income, and Earnings for Hispanics and non-Hispanic Whites in and Before the Great Recession

The business cycle can and does have different impacts on different population groups. This has been especially evident during the Great Recession in New Mexico, with Hispanics suffering proportionately more in the downturn than non-Hispanic whites. Unemployment rates are generally higher for minority groups than for whites, and incomes and earnings are generally lower. But the pre-recession housing bubble nearly closed the gap between Hispanic and non-Hispanic white unemployment, and decreased the gaps in income and earnings. All of these gains for Hispanics were lost in the Great Recession. This paper explores why this happened. 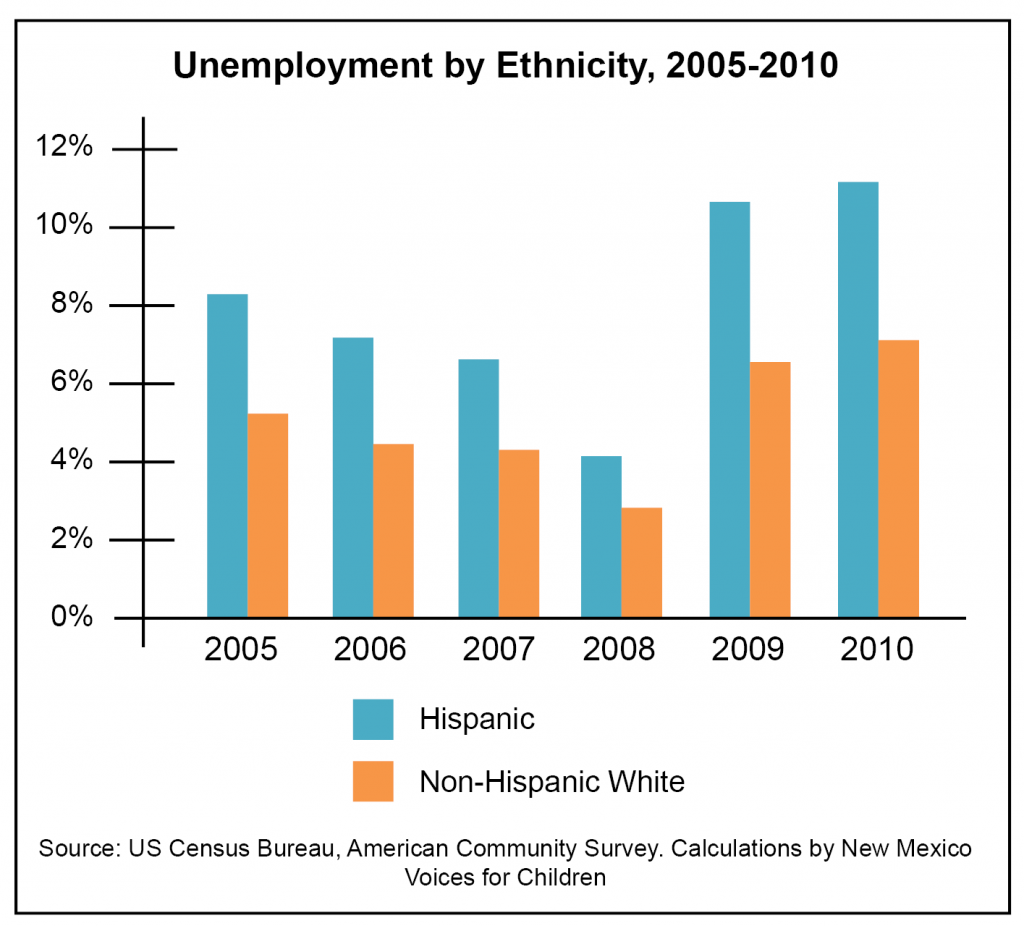 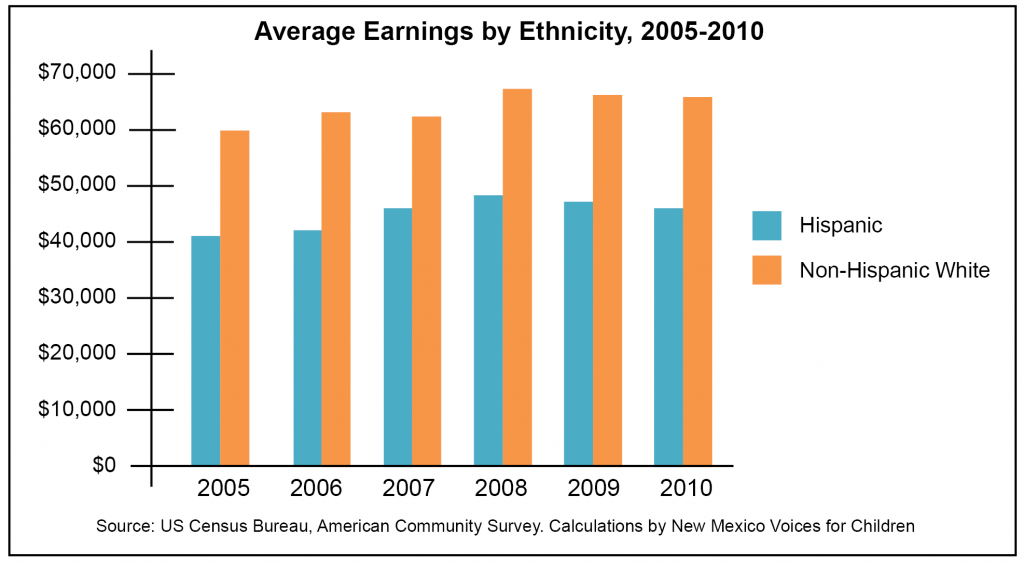 Although construction employment collapsed during the recession, there are bright spots for Hispanics in other sectors. The professional, scientific, and management sector generally provides higher-paying jobs that are more likely to include benefits such as health insurance and pensions. Non-Hispanic whites clearly outnumber Hispanics in this sector, although Hispanics do seem to be getting a stronger foothold. Hispanic employment in the professional, scientific, and management sector rose by about 12 percent, from about 30,000 in 2005 to 33,500 in 2010. Non-Hispanic white employment in this sector also rose (from 51,600 to 52,800), but just by 2.3 percent. As more Hispanics enter this sector, the foundation for an enduring Hispanic middle class will be strengthened.

The other sector in which Hispanics are doing well is public administration (government employment). Government jobs don’t tend to pay as well as jobs in the professional, scientific, and management sector, but they usually include benefits like health insurance and paid sick leave. Hispanics actually outnumber non-Hispanic whites in the government sector. Hispanic employment in government rose by about a third (from 26,300 to 34,800), between 2005 and 2010. Non-Hispanic white employment in government rose by less than a fifth (17 percent; from 27,000 to 31,700) during this same time period. The non-Hispanic white increase was half the rate of increase for Hispanics.

One factor holding Hispanic economic performance back in the short term is age—New Mexico’s Hispanic population is younger than the non-Hispanic white population. About 31 percent of Hispanics were under 18 years of age in 2005, and that percentage had not changed by 2010. Non-Hispanic whites are much older — about 18 percent of non-Hispanic whites were under 18 years old in 2005, and that fell to about 16 percent in 2010. Youth is a factor because children, who rarely contribute to the household income, are financially dependent. 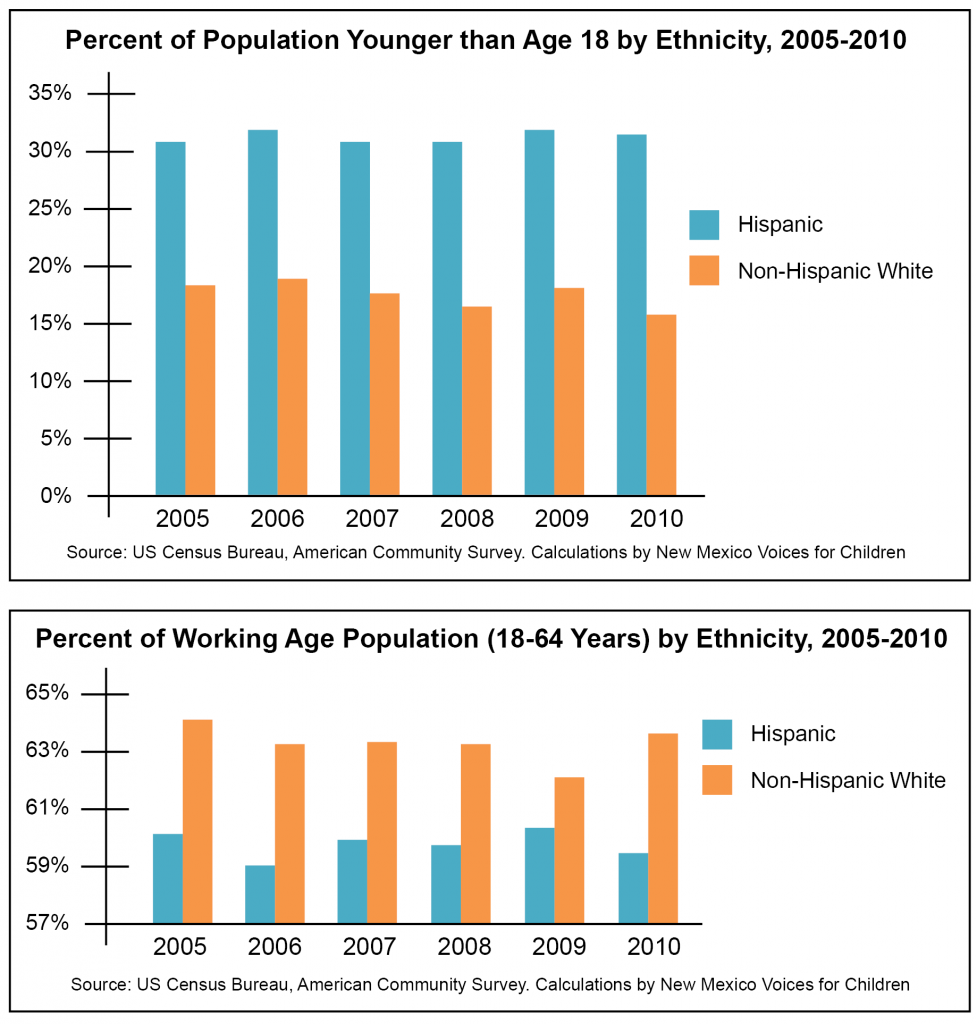 It is also telling that Hispanics in New Mexico are far more likely to be immigrants (called ‘foreign-born’ by the US Census) than non-Hispanic whites. The immigrant share of the Hispanic population rose from 15 percent in 2005 to 20 percent in 2007, and stayed at 20 percent through 2010. That represents an increase of one-third in the foreign-born share of the Hispanic population. During the same period, the immigrant share of the non-Hispanic white population rose from 2.6 percent to 3.2 percent, an increase of nearly 25 percent, but from a very small base. In absolute terms, the Hispanic immigrant population grew from 129,000 in 2005 to 160,000 in 2010. 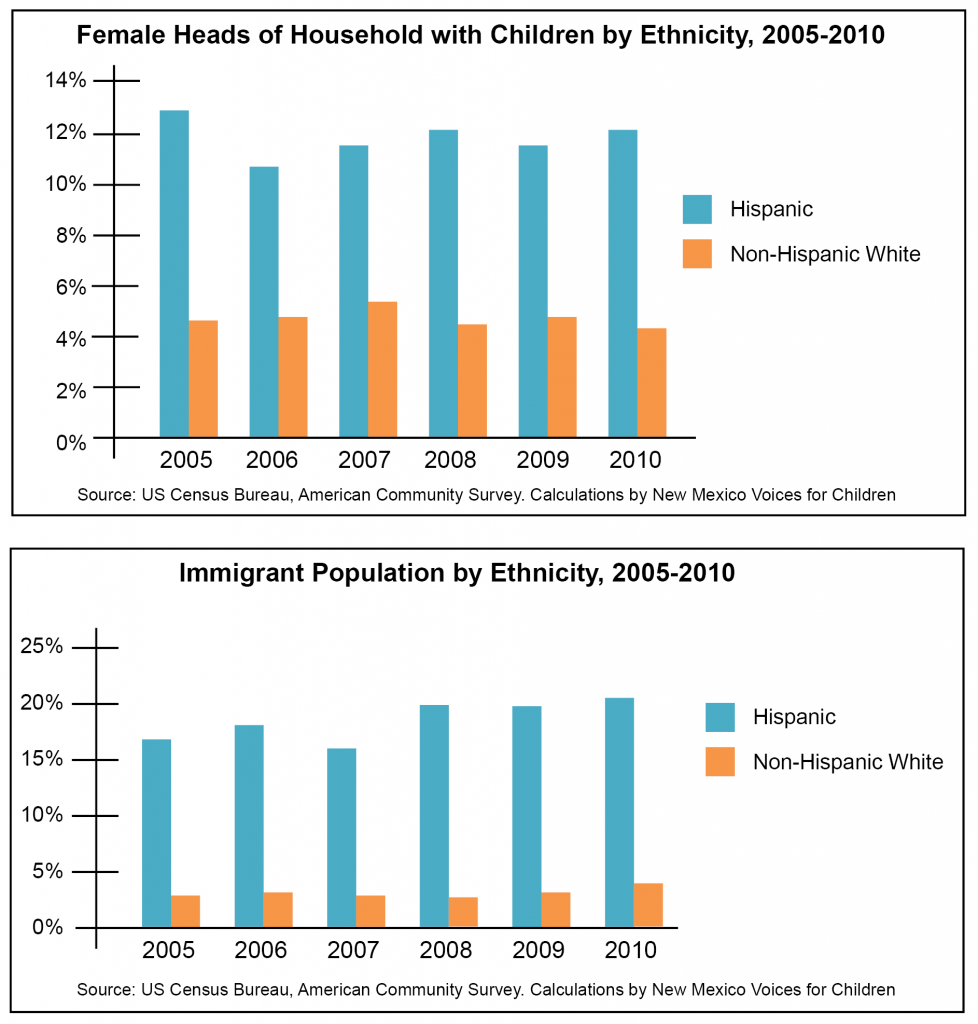 Hispanics have fared poorly in the period directly after the bursting of the housing bubble. Between 2005 and 2010, Hispanics outcomes lagged non-Hispanic whites outcomes in unemployment, median household income, and average earnings. The collapse of the housing bubble rocked the construction sector, a sector where Hispanics workers were concentrated. There are some bright spots in the labor market picture for Hispanics, though. Hispanics are gaining ground in the professional, scientific, and management sector, as well as in government job, which creates a foundation for future success. Factors that will continue to hold Hispanics back include a youthful age distribution, the high proportion of households headed by females with children, and the high percentage of immigrants in the Hispanic population. The overall picture for Hispanics in the recession was mixed, but there are definitely grounds for hope of better outcomes in the future.

Because the construction bust was integral to the Great Recession, it is important when comparing economic outcomes for Hispanics and non-Hispanic whites to ask why Hispanics are over-represented in the construction industry. One reason may be age — as construction work is hard physical labor, workers will tend to be younger than in other sectors. It is also a sector that tends to attract immigrants for a variety of reasons. Because New Mexico’s Hispanic population is younger and more are immigrants than the state’s non-Hispanic whites, it makes sense that more of them would find work in this sector. One cannot, however, discount educational outcomes.

Hispanics are under-represented in the professional, scientific, and management sector. Jobs in this sector tend to pay better and require at least some college education. Hispanics are less likely than non-Hispanic whites to graduate from high school and receive a college degree. Therefore, policy changes should address this educational achievement gap:

Policies must also address issues for the unemployed:

New Mexico should increase its investment in the coming year in these critical programs and support systems that will help close the unemployment, income, and earnings gap that leave so many New Mexicans behind.