Snapshots from the American Community Survey and Other Data Sources

It should be noted that the criteria for child and family well-being used in this report come from the dominant white American culture. Some Native American people have differing criteria for “poverty,” for example. Poverty may be defined as a loss of traditional culture rather than earning a low income. In addition, New Mexico’s Native American communities have many strengths not necessarily reflected by the indicators used in this report. One capacity mentioned here is the high rate of children and youth who speak English and a language other than English; research is showing that preschoolers speaking more than one language may have better problem-solving skills than monolingual children. New Mexico’s Native American communities also have unique cultural identities beyond the use of tribal languages and other traditions. For example, unlike many tribes across the U.S. who were displaced from ancestral lands, most of the state’s tribes and pueblos have largely maintained or regained this important connection. Having a tangible tie to tradition and the land has a positive impact on community well-being in ways not measured in this report.

Demographics: The section of the Navajo Nation that lies within the boundaries of New Mexico has the largest population (62,028) of the Native American communities in the state, while Zuni Pueblo has the second largest (10,537). Many of the pueblos are quite small, having populations of 2,000 or less. In addition, people of other races and mixed race/ethnicity live on tribal lands. In several pueblos, as much as 75 percent of the residents are non-Natives.

Demographically, New Mexico’s Native American pueblos and tribes differ from each other and from the state’s population as a whole. In eight communities, for example, the population of very young children (ages 0 to 5) makes up 10 percent or more of the tribe’s population, a rate higher than that of the state as a whole.

A family’s financial situation with regard to the federal poverty level is only one way of gauging the well-being of families and children. Another measure of economic security is to consider the other financial assets and resources families have—such as savings, interest from investments, and rental income—that can help them weather a financial downturn, likes the loss of a job or overwhelming medical expenses. In New Mexico, about one-fifth (21 percent) of all households have income including interest, dividends, and rental income. Few of the tribes covered in this report meet that percentage level, with some exceptions—among them the Jicarilla Apache, which reports 40 percent of its households having this type of income.

The number or percent of households that receive Supplemental Nutrition Assistance Program (SNAP) support (formerly “food stamps”) is often used as an indicator of “food security”—a measure of the ability of a family or household to ensure access to essential nutrition for its members. It is also linked to levels of poverty. In New Mexico, which is considered a “poor” state, up to 10 percent of all households—and 16 percent of Native American households—receive SNAP benefits.

Native American families with children have lower rates than the state as a whole when it comes to parents having secure (full-time, year-round) employment. In 20 percent of all New Mexico families with children, neither parent has had secure employment in the past year. Only in Isleta, San Ildefonso, and Jicarilla did less than 20 percent of families not have secure employment. In many of the tribal communities, up to a third or more of families had no secure employment. Eleven percent of all New Mexico children—and 22 percent of Native American children—live in families where no parent is in the labor force. In eight pueblos (Acoma, Cochiti, Jemez, Ohkay Owingeh, Pojoaque, San Ildefonso, Santa Clara and Zia) a much lower percent of children face this situation.

However, these data on the cost of housing should be balanced by information from reports over the years that find that housing conditions for Native Americans throughout the United States continue to be much worse than those for the nation as a whole.2 Nationally, roughly 40 percent of Native Americans lived or live in overcrowded or physically inadequate (poor quality, lack of complete plumbing, etc.) housing conditions.3

Education and Language: New Mexico’s Native American communities perform well in educating young children. In three-quarters (77 percent) of the state’s Native American communities, a high percentage of 3- and 4-year-olds are reported to be attending preschool (which includes the category “nursery school”). The rates of these children attending preschool range from 25 percent in Pojoaque to 100 percent in Nambé. (However, population sizes for 3- to 4-year-olds in these areas are often quite small.) The overall state enrollment rate for 3- and 4-year-olds is 39 percent, while the overall rate for all Native American preschoolers is 47 percent. Research shows that participation in a system of high-quality early childhood care and education services—from birth to age 5—greatly improves a child’s chances of success in education, health, and in the workforce.

The wording of the American Community Survey question does not clarify what those responding to this enrollment question meant by “preschool” or “nursery school.” Thus, 3- and 4-year olds may be attending licensed child care centers, registered family homes, Head Start, Early Head Start, preschool, or something else. Some of these programs, like Head Start, are of higher quality than others. However, the high rates of attendance do indicate a potential path to improved educational, health, and economic outcomes for Native American children.

Native languages are spoken in all of New Mexico’s tribes and pueblos, though to varying degrees. A high proportion of Native American children ages 5 to 17 living in their communities speak a language other than English, and a very high percentage of these youth also speak English “very well.” Due to the way the American Community Survey question is phrased, it is not possible to report with accuracy how many children are truly bilingual—fluent in both languages. However, a higher percent of Native American children (34 percent) speak English and another language than do New Mexico children as a whole (26 percent). Tribes with more than half of their children reporting they speak two languages include Acoma, Cochiti, Jemez, San Felipe, Santo Domingo, Zia, and Zuni. Few Native American children, except among the Navajo, are reported to be linguistically isolated (defined as having “no family member older than 14 years old who speaks English well”).

While language competency is a big plus for Native American children, it may not necessarily translate to high literacy levels. Not all of the native languages spoken in New Mexico have a written component, and cultural traditions have generally placed more value on oral story telling than on reading or writing. Whether or not this is a factor in the English reading scores of Native American students is uncertain, but it is certainly worth further study.

In only four of the tribal communities in New Mexico, do a greater percent of youth (ages 18 to 24) than those in the state as a whole have either a high school diploma or higher level of education. In Santa Ana and Pojoaque nearly 90 percent of youth have a high school diploma or higher. These rates rest predominantly on the numbers of youth who graduated from high school; many fewer young Native Americans living in the pueblo or reservation communities are attending or have attended a college or university.

Only Pojoaque (34 percent), San Ildefonso (33 percent), and Zuni (31 percent) come close to meeting the state enrollment rate (35 percent) for youth ages 18 to 24 in higher education. In four tribal communities, the percentage is exceptionally low; for example, only 2 percent of youth in Tesuque and 4 percent in Mescalero are enrolled. Yet when we also consider the data for Native American youth who live outside the tribal community boundaries, the enrollment rate rises—27 percent for all Native Americans ages 18 to 24 living in New Mexico as a whole, and 35 percent for those in Albuquerque. This may indicate that enrollment rates are lower in pueblo and reservation communities because the young people are no longer living at home and are attending higher education institutions located outside the pueblos or reservations.

Another indicator may be cause for concern—the percent of teens ages 16 to 19 who are not in school or working (sometimes referred to as “disconnected” youth). Eleven percent of all teens in this age group in New Mexico are in this category, yet in only seven tribal communities is the percent of disconnected teens at or below the rate for the state. Some Native American communities have much higher rates, as in Nambé Pueblo, where 69 percent of teens are not in school or working. This may also be a reflection of a lack of employment opportunities in the areas where these teens live.

The National Assessment of Educational Progress (NAEP) assesses nationally representative samples of 4th grade students on their reading proficiency every two years. Reading proficiency by 4th grade is considered a “make-or-break benchmark” as to whether a child will succeed in school—and in life. This is because children “learn how to read” up to 4th grade; after this, they must “read to learn,” i.e. use their reading skills to learn other subjects like math and science.5 A student who is not proficient in reading by 4th grade may find later subject texts incomprehensible, become frustrated, and fall behind other students in school performance. Such students often face potential grade retention, and may develop social and behavioral problems. Children who are not proficient readers by 4th grade are more likely to drop out or not graduate from high school.6 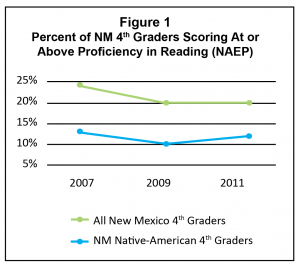 Figure 2 shows the trend in NIES student scoring from 2005 to 2011.7 Research shows that children’s participation in high-quality early childhood care and education improves their readiness for school and their 4th grade reading scores. As both of these indicators are contributors to future academic and workplace success, it is essential that New Mexico move forward quickly on policies supportive of a solid early childhood care and education system in the state, so all children can succeed.