The State of Working New Mexico 2014

Teenagers and Young Adults in the State’s Workforce 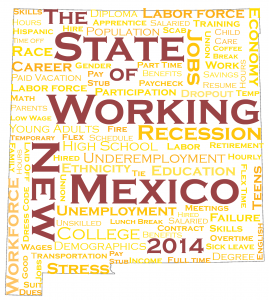 In the past two decades a momentous shift has taken place within our workforce. New Mexico’s labor force, which in 1990 was dominated by workers in their prime working age (those aged 25 to 54), now has a much more significant role for workers over age 55. This is to be expected as our population ages. At the same time, the share of younger workers in the workforce has fallen. Although some of that is undoubtedly due to the Great Recession, the share of younger workers in the workforce did not rise during the economic expansion of the early 2000s. What’s more, it is common for youth under age 25 to enroll in college in higher rates when the demand for young labor is low, but that was not the case during the recession.

Inclusion in the workforce is an important rite of passage for young people: finding a job carries with it the possibility of living independently and starting a family. Failure to join the labor force can cause significant stress, both to the young workers themselves and to their parents. This report will discuss the labor force performance of teenagers and young workers both over time, and will compare conditions in New Mexico to other states in the mountain west region.

The ‘labor force’ is composed of people who are working and those looking for work (see the ‘definitions’ box). Chart I, which is compiled from a data set provided by the Economic Policy Institute, shows that the share of teenagers and young adults (indicated by the orange line) in the New Mexico labor force has been gradually dwindling over the past two decades. In 1990 people aged 16 to 24 accounted for 17.3 percent of the labor force. That share had fallen only slightly, to 16.7 percent in 2000, but continued to drop even during the economic expansion of the mid-2000s. By the onset of the Great Recession in 2007, young adults made up only 13.8 percent of the labor force. By 2013, the share of young workers in the labor force had increased slightly, to 14.5 percent, as the recovery began to take hold. It is too early to see if that slight increase represents a trend. 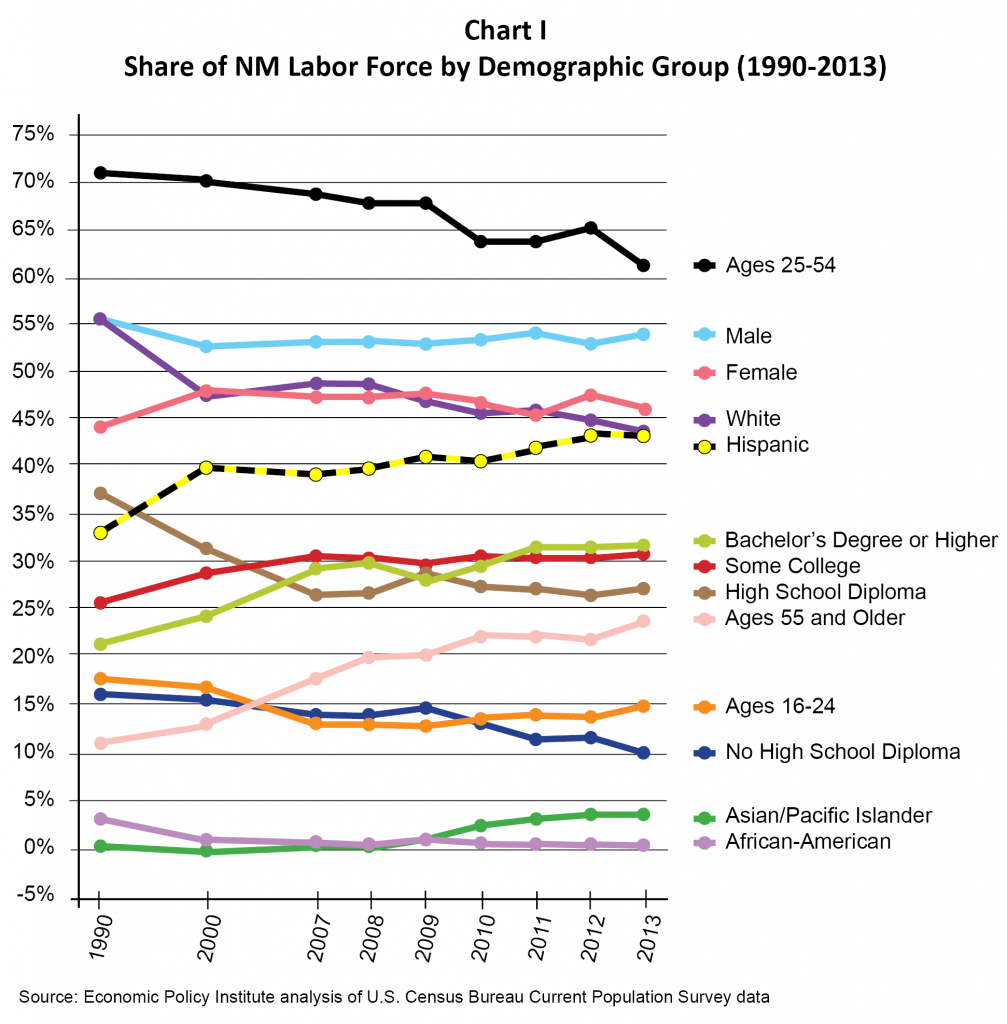 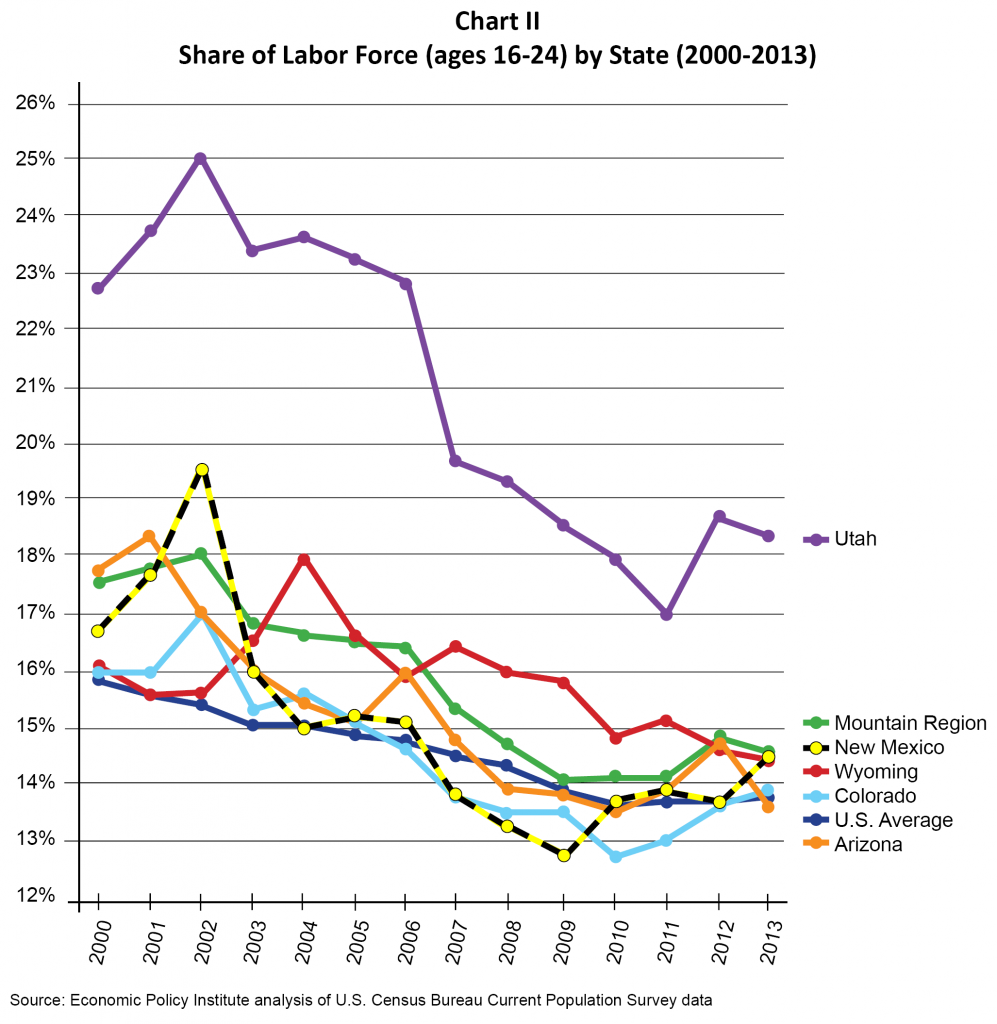 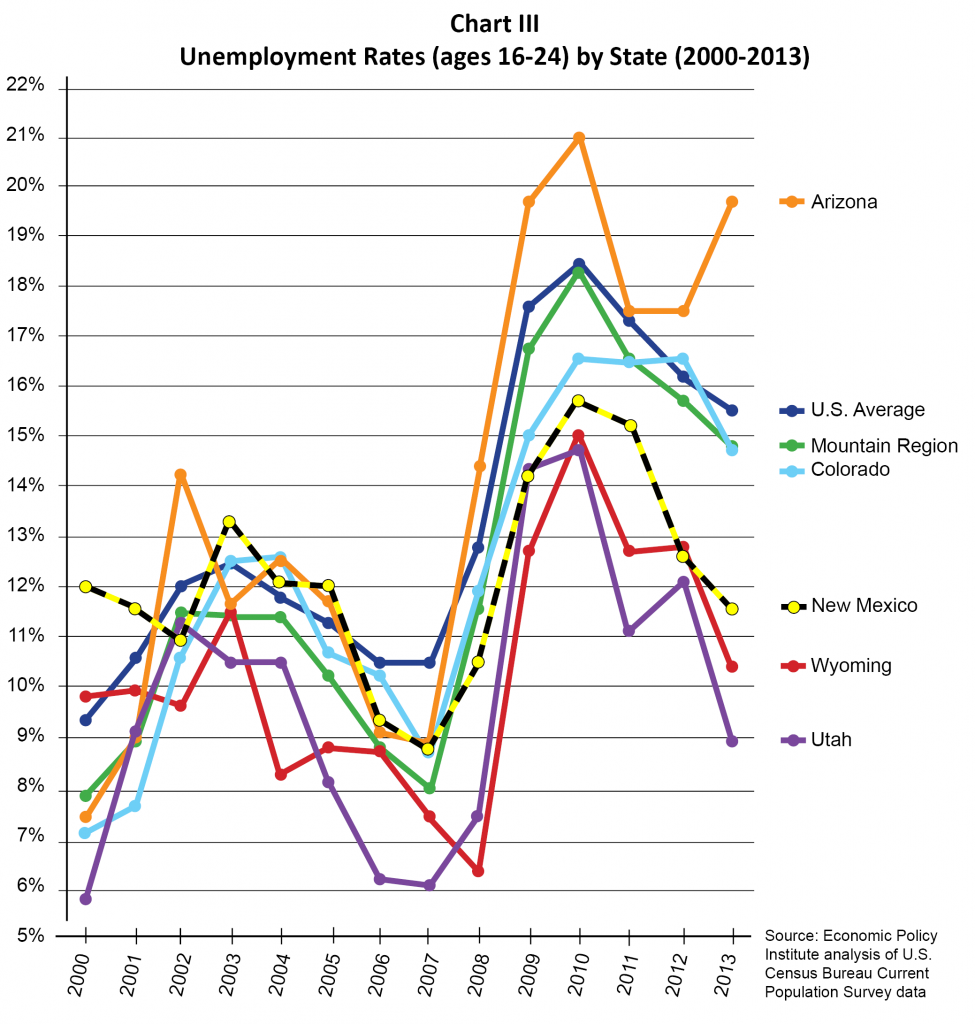 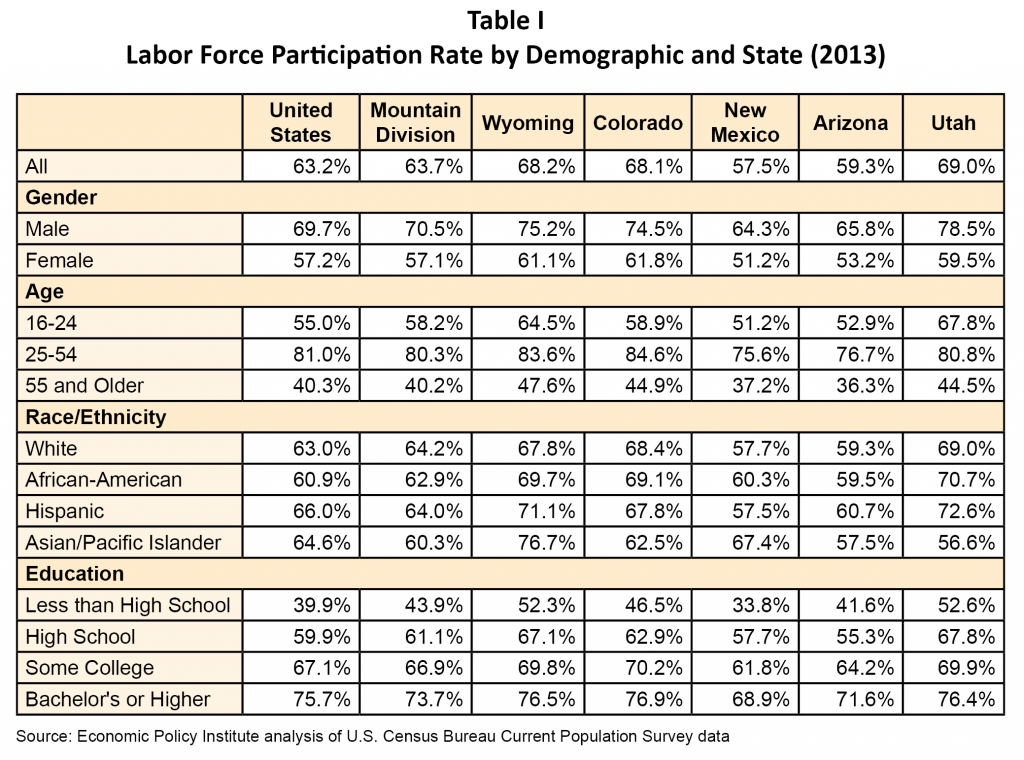 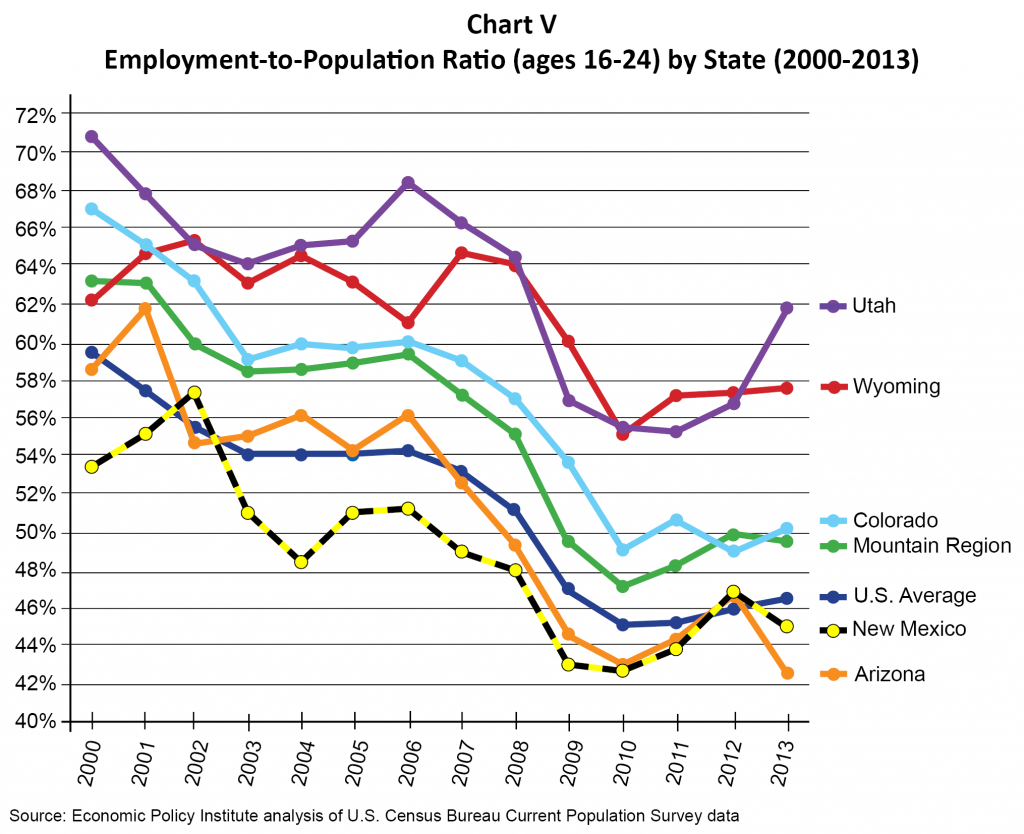 Table II, from the Bureau of Labor Statistics’ Geographic Profiles series, allows us to look at a snapshot of the 2013 workforce with a breakout of workers aged 16 to 19. The table shows that youth have a lower labor force participation rate and employment-to-population rate than adult workers. Also, young workers have an unemployment rate about twice the average rate for all workers. 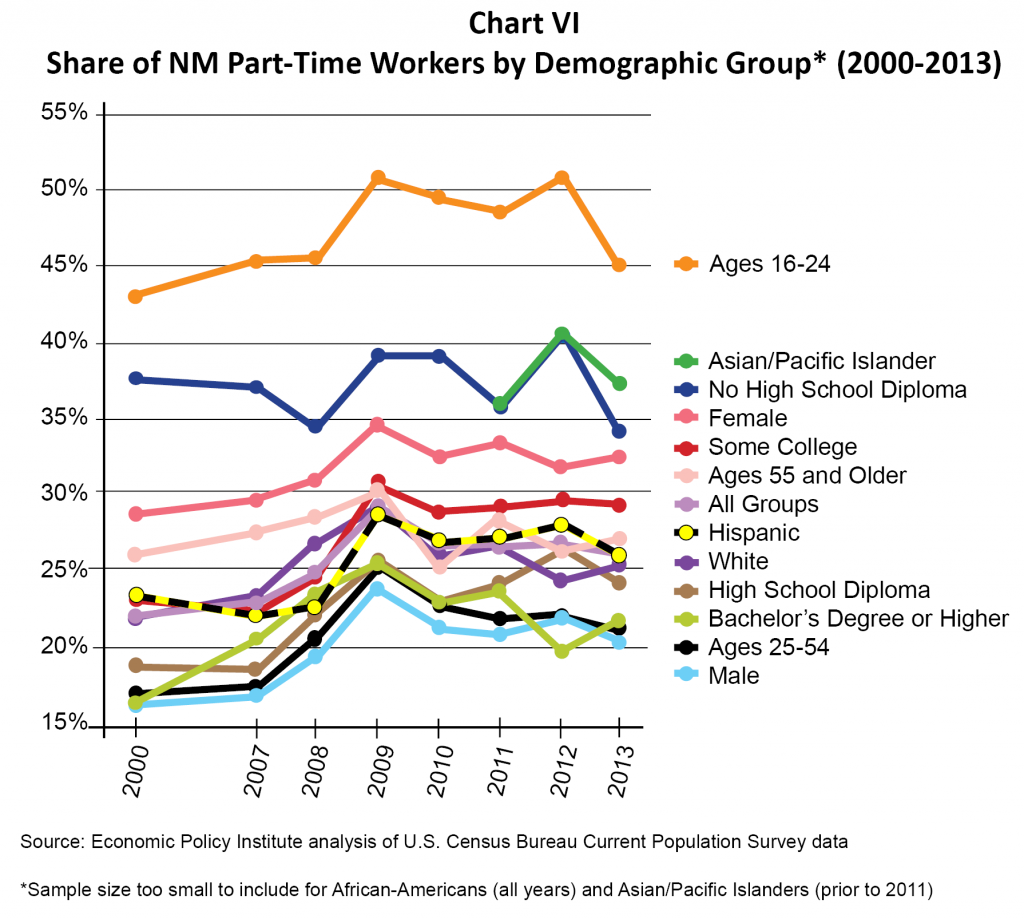 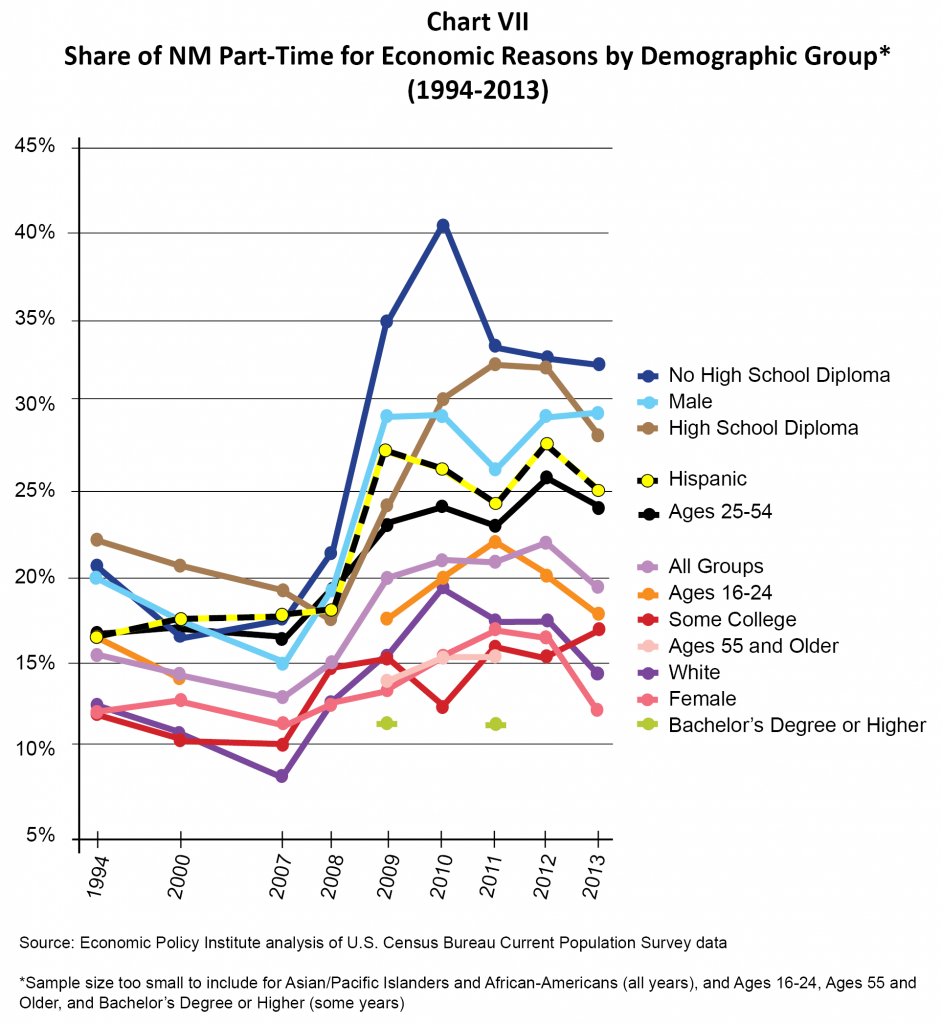 ‘Underemployment’ includes workers who meet the official definition of unemployment as well as: involuntary part-timers; and ‘marginally attached’ workers—those who are available to work, want to work, and looked for work in the past year but have given up actively seeking work. While this is the most comprehensive measure of labor performance available from the U.S. Bureau of Labor Statistics, it does not include workers who are underemployed in a ‘skills or experience’ sense (as in, say a mechanical engineer working as a barista). Despite this limitation, underemployment reflects the reality of the labor market far better than the official unemployment rate. The U.S. Bureau of Labor Statistics does not publish underemployment at the state level, so this measure is available only from the Economic Policy Institute (see Chart VIII). 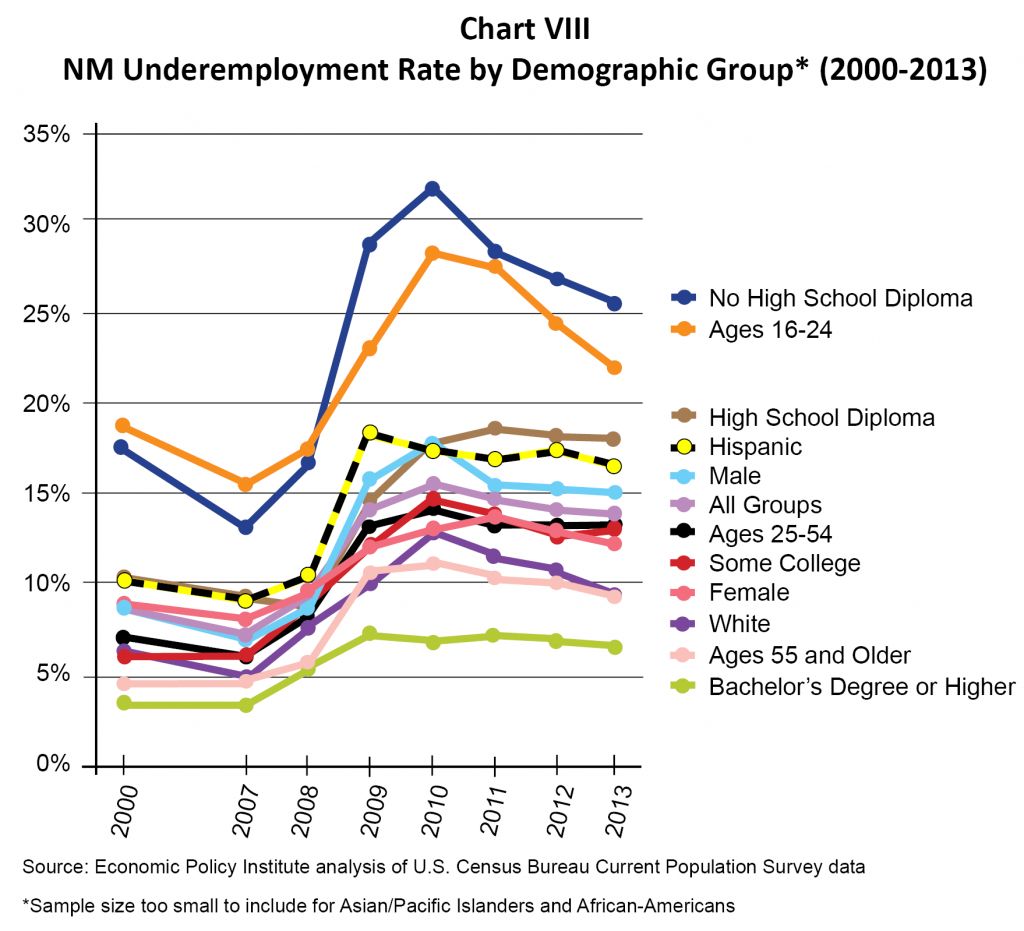 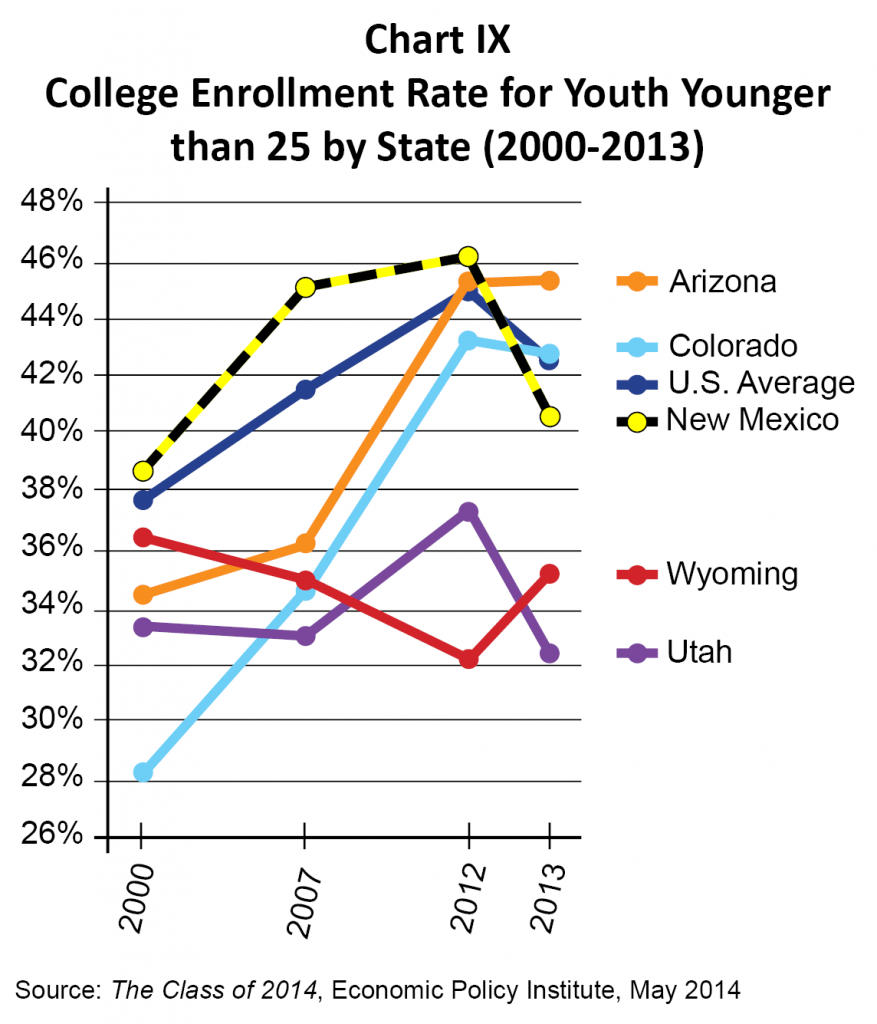 A common perception about the labor market for youth is that teenagers and young people tend to shelter in school when faced with low demand for their labor market contribution. In their recent report, The Class of 2014, the Economic Policy Institute noted that:

“Educational opportunity is often identified as a possible silver lining in the dark cloud of unemployment and underemployment that looms over today’s young graduates. The assumption is that a lack of job opportunities propels young people to ‘shelter’ from the downturn by attaining additional schooling. However, there is little evidence of an uptick in enrollment [for those under age 25] due to the Great Recession.”

Chart IX shows that in New Mexico, Arizona, Colorado, and the nation as a whole, college enrollment for youth was rising gradually between 2000 and 2007. Enrollment then dropped between 2012 and 2013, except in Wyoming and Arizona. This demonstrates that young people were not sheltering in college during the later years of the Great Recession.

Scale up the Youth Conservation Corps to include more young people
The New Mexico Energy and Natural Resources Department manages a program called the Youth Conservation Corps (YCC). With a budget of $4.65 million, the YCC employs 800 young people to work on projects that improve New Mexico’s natural, cultural, historical, and agricultural resources. The YCC provides tuition remission for participants who complete a year in the program.

Leverage federally funded programs administered by the state
New Mexico should coordinate state policy efforts to maximize matched state funding requirements for a number of federally funded programs that have been shown to help older teens and young adults. Programs in New Mexico include: YouthBuild, a full-time paid program where young people ages 16 to 24 work on getting their high school diploma or equivalent while learning job skills as they build affordable housing in their communities; and Job Corps, an education and skills training program where at-risk and low-income young people are provided with free-of-charge housing options as they gain occupational skills and increase their educational attainment.

Elevate the attention to issues of disconnected youth through youth advisory groups
States are required to set up Youth Councils (with various stakeholders represented) as subgroups of Workforce Investment Boards. The four Youth Councils in New Mexico should develop and disseminate state policy recommendations that are relevant to the current workforce issues and that can increase the education and employment opportunities of young persons in each of the four regions.

New Mexico’s Youth Alliance, comprised of youth representatives from every legislative district, was created to advise the Children’s Cabinet. This under-utilized resource could advise policy makers on youth participation in the workforce.

Develop a comprehensive career pathways framework
Youth with few work skills or low levels of educational attainment often need help completing high school, and earning industry-recognized credentials and college degrees. Many older teens and young adults enroll in adult basic education programs in New Mexico (about 40 percent of participants are between 16 and 24 years of age) but the state’s current system is fragmented and has low completion rates. Other states have had greater success with career pathways programs that bridge and align basic education courses with credential attainment and college courses.

Replace money diverted from the College Affordability Fund
Restoring the currently empty College Affordability Fund would provide need-based tuition assistance to those who have been out of school for more than a year and may not qualify for scholarships like the NM Lottery Scholarship. Eligibility should also be broadened to include degrees and professional certificates from two-year colleges and to allow non-traditional students to take fewer courses at a time to more easily fit school into work schedules.

Make the lottery scholarship need-based
Due to increases in tuition and a leveling-off of lottery ticket sales, the state’s lottery scholarship trust fund is in danger of being depleted. Since the eligibility criteria for the scholarship is broad—and it is available even to students who could otherwise afford the cost of college—demand remains high. Making it need-based would ensure that it was available to those who most needed it.

Increase the state minimum wage and the Working Families Tax Credit
Raising the minimum wage improves the economy because it puts money into the hands of those who are most likely to spend it—low-income workers. The state should raise the minimum wage and index it to rise with inflation. The wage for tipped workers should be raised to 60 percent of the non-tipped minimum.

Increasing the Working Families Tax Credit (WFTC) and the minimum wage together can be an effective way to encourage entrance into the work force and provide greater financial support to working families, especially those with children. The two programs overlap but reach different populations—while the minimum wage targets the lowest wage workers the WFTC reaches workers (most of whom have children) making considerably higher—but still low-wage—incomes.

Adequately fund early childhood care and learning services and K-12 education
Despite the fact that our highly technical economy has increased the demand for a better educated workforce, our educational policies have not kept up. Over the last few decades scientists have learned that 80 percent of a person’s brain development occurs during the first few years of life. Up through age four, the brain architecture that will allow for later learning is being built. When children do not receive the kind of care that supports this growth they are likely to start school already behind their peers. Remediation programs, though essential, are less effective and more costly than good prevention. While the state has increased funding for early childhood programs such as home visiting, high-quality child care, and pre-K, the need still outpaces the availability of such services.

As the recession curtailed the state’s tax revenue, deep cuts were made to spending in many programs, including K-12 education. While much of that funding has since been restored, the state is still spending less on an inflation-adjusted, per-pupil basis than before the recession.