Arts can Help Youth in the Juvenile System 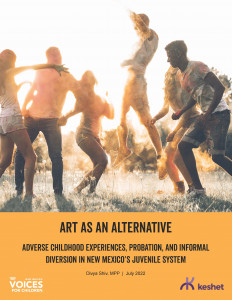 When trying to fix a problem, we all want to use the most promising solutions. And, when we find out that our promising solutions are actually counter-productive, most of us are open to changing course. New Mexico’s leaders should consider changing our approach to youth who make mistakes that land them in the juvenile justice system. For years, probation has been used to try and keep these youth from further involvement in the system. But, as recent studies have shown, probation is neither effective at keeping our communities safer nor of rehabilitating the youth it is supposed to serve. Probation, in fact, can actually lead to youth being further ensnared in the system. For example, when youth who are at low risk of reoffending are placed on probation, they are 50% more likely to reoffend compared to their counterparts who were not placed.

In understanding the best ways to help youth in the juvenile system it’s invaluable to consider why these youth are there in the first place. The simple answer is the preponderance of adverse childhood experiences – referred to as ACEs. These traumatic experiences include being the victim of or witness to domestic violence, growing up with parents who have untreated substance abuse, and the death of a parent. The more adverse experiences children face, the more likely they are to suffer from chronic stress, which is toxic to the developing brain. Youth who have been abused and neglected are 11 times more likely to get arrested than peers with fewer ACEs, and for every additional adverse experience, the odds of youth becoming seriously or chronically court-involved increases by 35%.

Children are naturally very resilient and, when they have strong support systems, they can overcome what can otherwise be life-long challenges that can come with having experienced early trauma. Without support systems, however, children with many ACEs are more at risk of engaging in behaviors that will lead them to involvement in the juvenile system.

Unfortunately, New Mexico has higher rates of children with multiple ACEs than the nation as a whole. In New Mexico, 18% of children have experienced three or more ACEs before turning 18, nearly double the national average. The majority (86%) of New Mexico’s incarcerated youth have experienced four or more ACEs. In addition to involvement in the court system, ACEs are linked to suicide, low educational and employment outcomes, and poor health in adulthood. In addition to harming our children, these outcomes also come with a high cost to our families and communities.

It’s also important to remember that the human brain is not fully developed until the age of 25, so it doesn’t make sense to treat juvenile offenders the same way adults are treated. Studies have shown that adolescent brains react more positively to rewards compared to adult brains. This makes youth more likely to respond to positive incentives than to punitive measures. Yet, probation is grounded in rules, surveillance, and punishment, which actually results in worse outcomes compared to no interventions.

ACEs are most effectively addressed through diversion programs, which can be used instead of or in conjunction with probation. Diversion programs that offer expression through the arts – such as photography, painting and drawing, writing, music or dance – can be highly effective at helping youth build positive relationships and gain skills in discipline, leadership, and teamwork. Art provides an outlet for youth to address emotional or problematic behaviors by enabling them to learn new skills and express thoughts in creative and therapeutic ways, which helps youth build resiliency. Overall, art programs decrease disruptive behavior in youth and lower rates of recidivism by promoting socio-emotional skills.

Diversion is especially helpful for first-time nonviolent offenses and for youth who are chronically systems-involved but do not pose a significant threat to public safety. Aside from being effective, these programs are also significantly less expensive than probation or incarceration. They are also chronically underused: currently, less than 1% of youth who violate their probation are given the opportunity to access alternative diversionary programming in New Mexico. Yet, Counterintuitively, the most common outcome (47%) for a probation violation charge was more probation, indicating that probation can be a never-ending cycle.

Instead of relying heavily on tactics like probation, New Mexico’s leaders should increase the rate of youth who are diverted into community programs so more of our most at-risk youth can leave the never-ending cycle of systems-involvement and move toward rehabilitation and reintegration.