On Mother’s Day and Every Day, Families Belong Together 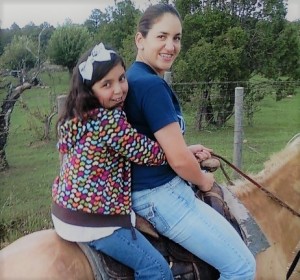 Naomi and her mother before being separated.

I was just eight years old when I learned about the harsh reality of immigration in the United States.

My grandfather passed away in March of 2009. For some time prior to that, he had been living in Madera, the Mexican city in Chihuahua where my mom and her sisters grew up.

That night, my whole life changed.

My mother and I set out on a long journey that included crossing a border I had no idea even existed. As an eight-year-old, I didn’t fully understand what that meant. It wasn’t until a few days later that my mom told me she could not return to Albuquerque.

Albuquerque was my home, my family lived there and so did my friends.

How do you tell an eight-year-old girl who spent every day of her life playing with her cousins, singing with her aunts, or even cooking with her grandmother, that she may never get to see them again?

How do you tell an eight-year-old that if she wants to return to her home, she must leave her mother behind? Or that the government of the country she was born in did not want people like her mom?

My mother had committed an immigration offense and she would not be able to ask the government for forgiveness until her 10-year sentence was carried out. The process of getting a visa was long and expensive.

Until one day, we had to make the hard choice of leaving her behind and returning to Albuquerque. It was a tough choice, but we knew the opportunities I would have in the U.S. were greater than those offered in Mexico, a country overrun with corruption leading to forced poverty.

It has now been 7 years since I came back to the United States and left my mom behind.

It’s hard having to grow up without my mother by my side, especially during such a crucial time in my life. It hurts not being able to consult my mom as make huge decisions like deciding where I will pursue my higher education. It hurts to see my girlfriends shopping for their prom dresses with their moms while I shop on my own.

Sadly, I am not the only child whose life has been completely changed due to immigration laws.

Approximately 18 million children lived with at least one immigrant parent in 2016, according to the Immigration Policy Institute. They accounted for 26 percent of the 70 million children in the U.S. For many of these children, a daily fear is that when they return home from school, their family may not be there.

Since late 2016, the American Immigration Council says doctors have reported they have seen more children exhibiting stress- and anxiety-related behavioral changes, including symptoms of “toxic-stress,” due to fear that a family member will be deported.

With the number of deportations rising each day, the anxiety and fear also rise within these kids.

Family separation is not only occurring at the border, but it is also occurring in our cities and our communities. Even worse, continual funding is being given to President Trump and his racist administration to fund more detention centers, increase the number of federal immigration agents, and continue separating families.

Harsher immigration policies will not only affect people who are here without documentation, but also their children. Many adults come to the U.S. in hopes of giving their children a better life. We need to focus on making sure they succeed.

Every day, we must join the fight to end family separations, whether they are occurring at the border, or in our own homes.

We need you in this fight with us, because families belong together.

Naomi Perez is a student volunteer with the New Mexico Dream Team.