New Mexico has a lot to offer, and we all share in the benefits of the state’s beautiful land and clean water, roads and bridges, and public services like education, health care, and public safety. We should all share in the responsibility of paying for them, too, but we don’t. Corporations get a big pass here in the Land of Enchantment. Not only did federal reform give a huge tax break to big businesses this past year, but here in New Mexico, we’ve given away more and more of our tax revenue over time in the form of corporate handouts and allowed multi-state corporations to play shell games with the profits they earn here. The result? Our state has less money to invest in the things that corporations really care about – modern and robust infrastructure, a well-trained workforce, and a market for their goods. So, hard-working New Mexicans are shouldering more of the responsibility for paying for the services that people and corporations alike depend upon in order to thrive.

Giving tax breaks to corporations makes it harder to invest in these important public services. Unfortunately, the Legislature did exactly that in 2013. That year, a bill to cut the rate for big corporations passed at the very end of the session with little debate. Legislators were led to believe that any loss of revenue would be minor, but that has not been the case.

Revenue estimates in December of 2012 – before the tax cut was approved – projected that CIT revenues would reach $400 million by fiscal year 2017 (as shown in the dark orange line in Figure I). But post-tax-cut revisions on those estimates have steadily fallen further and further, year after year. By 2018, actual CIT revenue was 80 percent lower than those earlier estimates. Turns out, the corporate tax cuts were much more costly than anticipated. 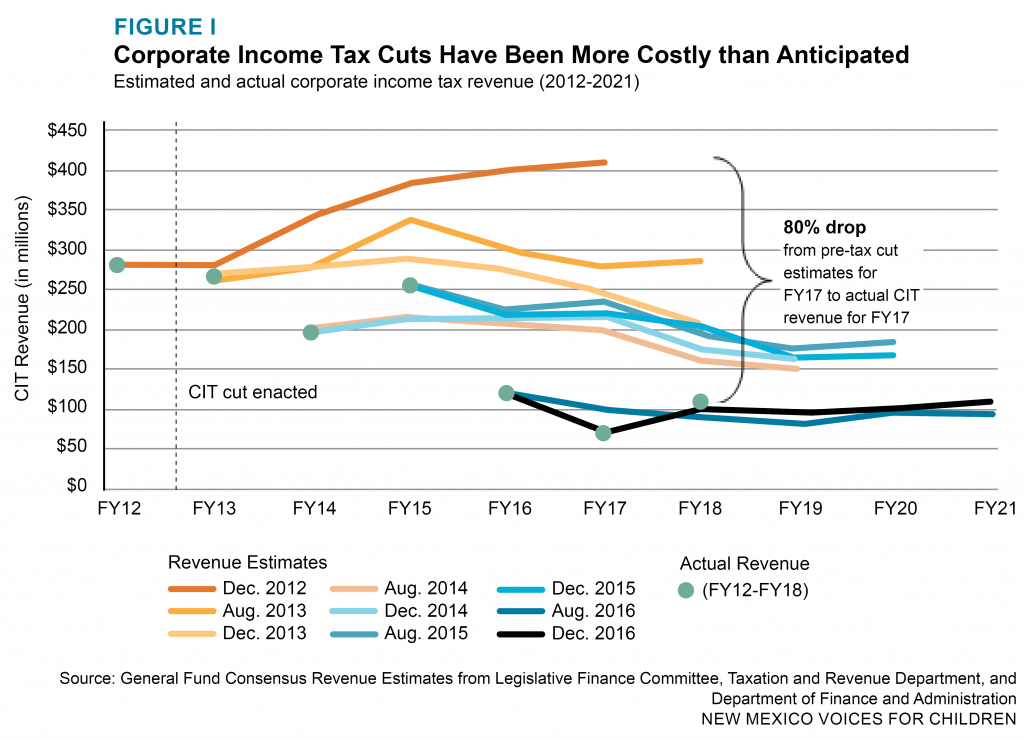 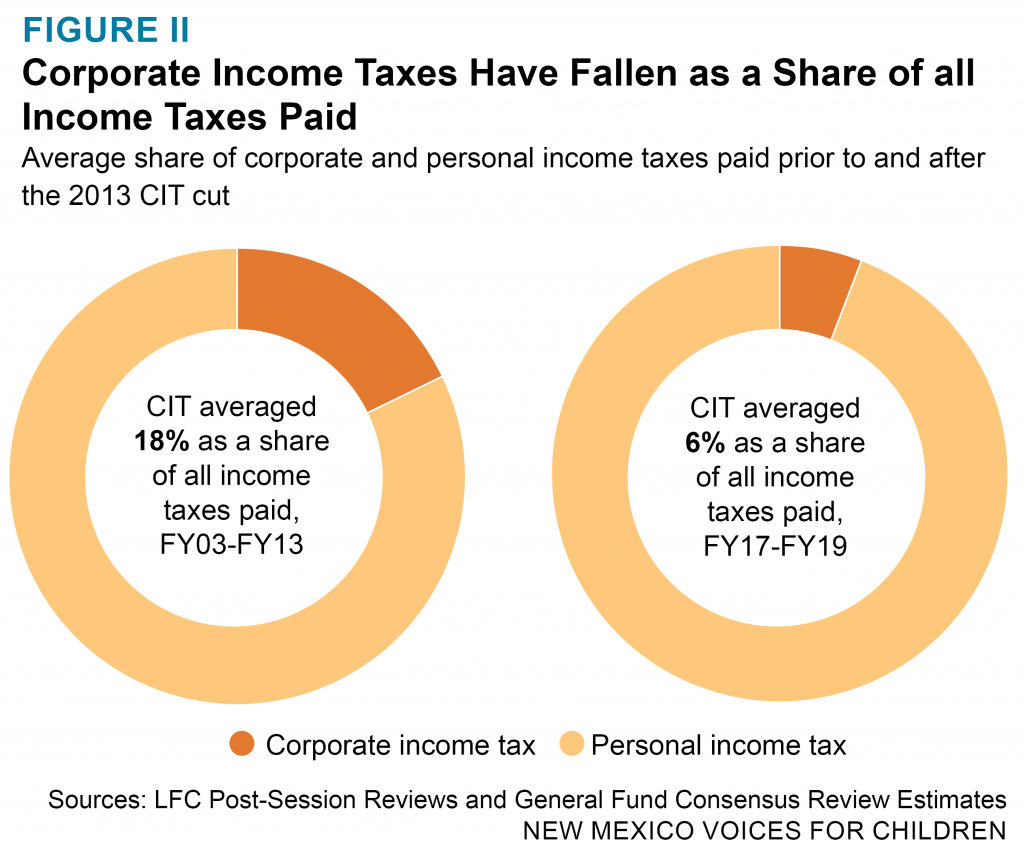 This decline in corporate tax revenue means that more of the income tax responsibility has fallen on hardworking New Mexicans. Corporate income taxes have made up a much smaller share of total income tax revenue since the cuts went into effect in 2014 (see Figure II). CIT as a share of all income taxes paid was, on average, 18 percent in the decade prior to the tax cuts. But CIT averaged just 6 percent for FY 17 to FY19 even without the tax cuts fully phased in. When corporations don’t have to pay for the public services they rely upon, then hard-working families have to shoulder more of the responsibility.

Corporate tax cuts have been sold to the American public for decades as so-called trickle-down economic theory. The academic literature is skeptical of the supposed connection between corporate tax rates and job growth. In reality, businesses hire employees because there is a consumer demand for their goods and services, meaning they will hire a new employee if that employee is needed in order to make more money. Tax rates are an insignificant factor when making hiring decisions. When considering location, corporations base decisions mostly on whether a state offers a growing market for their goods, a well-trained workforce, modern infrastructure, and a quality of life that makes people want to live there. If corporations are not paying their fair share in taxes, then it’s harder to invest in the benefits and services that actually draw businesses to the state.

Unfortunately, fair tax rates alone are not enough to ensure corporations are paying their fair share for New Mexico’s public services. Under current New Mexico law, loopholes allow many large, multistate corporations to avoid paying income taxes on their New Mexico profits. One of the primary ways they do this is by shifting profits earned in New Mexico to subsidiaries in states that have a lower – or no – corporate income tax. Enacting mandatory combined reporting would help close these loopholes and reduce or eliminate this form of corporate tax avoidance.

Combined reporting would also help level the playing field for our small, locally owned businesses, which can’t shift their profits out of state. Without combined reporting, our state will continue losing valuable revenue that could be used to invest in the education, health, and infrastructure needs of our communities.

Unfortunately, New Mexico has underfunded these services for too long – in part because the state has chosen to not require corporations to pay their fair share for them.

We need to make sure everyone – people and corporations alike – is paying their fair share to support a healthy and prosperous community. It’s time to build a stronger New Mexico and invest in what really matters and what really drives a booming economy: the well-being of our children and families. When our communities are truly thriving, what business wouldn’t want to be a part of that?

Paige Knight is a research and policy analyst with New Mexico Voices for Children.