New Mexico’s beautiful landscape – and the recreational opportunities it offers – is one of the main reasons people give for loving our state. Painters and photographers have long been drawn to New Mexico by the quality of light filtered through our vast, pristine skies. Everyone who loves New Mexico and calls it home has a stake in keeping our state clean and our environment healthy.

That’s why we all need to insist that our valuable natural resources are not wasted and our air is not polluted.

We Need to Clear the Air

But New Mexico has a methane waste and pollution problem. It’s not only ruining our air and harming our climate, it’s also costing us millions of dollars that would otherwise go toward purchasing text books, technology, and other resources for our classrooms. 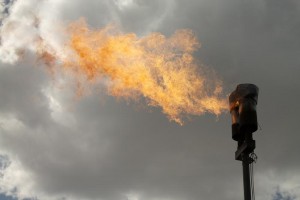 Methane is a powerful climate change pollutant that’s responsible for 25 percent of the global warming we experience today. It’s a byproduct that’s released when oil is pumped out of the ground. Some states require companies to capture (and pay for) the methane they release, but not New Mexico. We allow companies to either vent it – simply allowing it to escape into the air – or burn it off, called flaring. Methane is also leaked into the air when equipment is not properly maintained.

On the flip side, methane is a valuable energy resource. It’s the primary component of natural gas, which many New Mexicans use to heat their homes, cook their meals, and dry their clothes. Each year in New Mexico, oil and gas companies waste $275 million worth of natural gas through venting, flaring, and leaking. Because we allow companies to do this, we miss out on the more than $40 million we would collect in royalties and tax revenue – most of which would fund public education.

Not only would capturing this natural resource bring in revenue and improve our air quality, it would also create jobs and support the small businesses developing methane mitigation technology.

How You Can Take Action

New Mexico’s land, air and water are a cherished part of our heritage, and we have a moral obligation to protect them. We need to hold oil and gas companies accountable with commonsense methane and air pollution rules that protect air quality and our climate. A state methane rule is a win-win that reduces pollution, increases funding for education, and encourages job creation in New Mexico’s growing methane mitigation industry. Here are three simple things you can do:

We applaud Governor Lujan Grisham’s commitment to reducing methane waste and pollution, as outlined in her executive order. We call on her to issue draft regulations within her first year in office. Effective regulations should require oil and gas companies to cut methane emissions and repair leaks to stop energy waste, stem lost tax revenue, and protect our air and climate for future generations. Sign the petition here.

As state agencies begin the process of drafting methane mitigation rules, the public will have the opportunity to learn more about it at three stakeholder engagement meetings across the state. They are:

More information on these events will be available on the New Mexico Environment (NMED) and Energy, Minerals and Natural Resources (EMNRD) Department websites as details are finalized.

When oil and gas companies waste natural gas by deliberately burning it, releasing it into the air or by not fixing leaky equipment, New Mexico taxpayers lose out on tax and royalty revenue that could fund New Mexico schools.

New Mexico is home to two energy-producing regions that are among the nation’s most-polluted.

As a potent greenhouse gas, Methane is more than 80 times more powerful than carbon dioxide in the near term. In fact, about 25 percent of the global warming we are experiencing today is attributable to methane pollution.

In January 2019, Gov. Michelle Lujan Grisham announced that she was going to make New Mexico a national leader in cutting methane waste and pollution by adopting rules “to eclipse states that are successfully doing this work.” Gov. Lujan Grisham’s goal stands on firm ground given that Republican- and Democratic-leaning states across the U.S. have acted to cut emissions:

Is the oil and gas industry already doing enough to reduce its methane emissions?

No. While some companies have made commitments to reduce methane emissions, that only represents a fraction of the overall industry. All of New Mexico’s oil and gas producers should follow the same commonsense standards and use technologies that limit the amount of methane gas and pollution that is leaked, vented or flared from oil and gas facilities statewide. Moreover, the latest science has shown that methane emissions are five times higher than the oil and gas industry has reported to the EPA.

Why does New Mexico need a methane rule? Isn’t this a national issue?

The Trump administration is rolling back federal regulations on methane pollution and waste. Both the Bureau of Land Management and the Environmental Protection Agency are walking away from their oversight and enforcement of the oil and gas industry, leaving New Mexico unprotected from methane waste and pollution. Other states are stepping up with common sense rules to control methane. New Mexico needs to act to protect taxpayers and the health of local communities.

What is Gov. Lujan Grisham doing about methane?

Earlier this year Gov. Lujan Grisham issued Executive Order 2019-03, directing the state Energy, Minerals and Natural Resources Department and the Environment Department to work together to develop rules that would cut natural gas waste and clean up air quality in rural communities. There is no time to lose. We’re calling on the governor to issue draft rules before the end of 2019.

Would a state methane rule threaten oil and gas jobs in New Mexico?

No. Oil and gas development plays a significant role in New Mexico’s economy by creating jobs and funding education. As the industry continues to grow, it has a responsibility to develop oil and gas resources wisely, minimizing impacts on our communities. Other states have successfully enacted rules to curb methane waste and pollution while still allowing for growth and new jobs in the oil and gas industry. Moreover, cutting methane actually creates jobs in the methane mitigation industry.

Who supports creating a methane rule in New Mexico?

There is broad agreement for New Mexico to act on methane. Almost 90 percent of voters say that it is important for all of New Mexico’s oil and gas companies to follow the same standards to limit methane waste and pollution. Public health advocates, children’s advocates, tribal communities, environmental organizations, business leaders, elected officials, and local communities across the state have all supported action to cut methane waste and pollution.
Back to top / Sign the petition