When it comes to education, New Mexico ranks dead last.

That’s according to a newly released national Kids Count survey, which looks at a range of indicators for child well-being — including education, health and poverty — in every state in the union.

The Land of Enchantment didn’t fare much better in overall child well-being, either; New Mexico came in second to last. 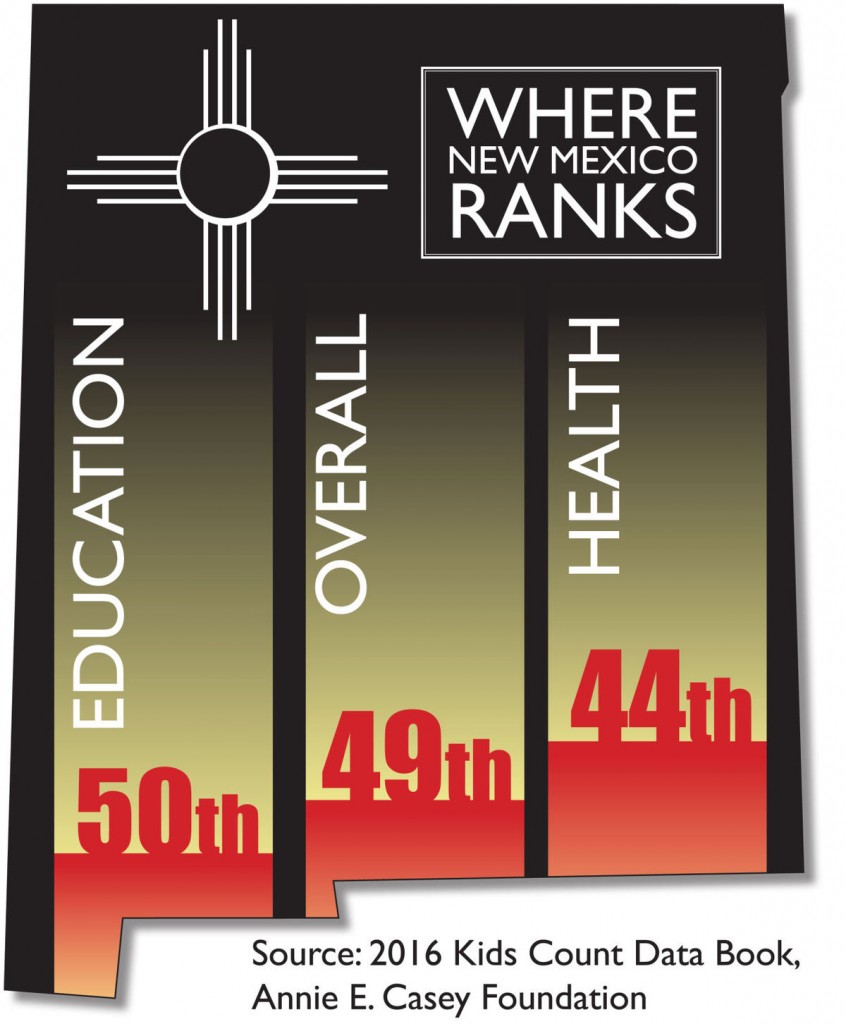 These numbers aren’t unfamiliar to New Mexicans. For the past three years, the annual report, funded by the Annie E. Casey Foundation, has named New Mexico as 49th overall.

While education advocates and policymakers debate the merits of various interventions to improve education — from testing to teacher evaluations to the development of charter schools — early childhood education has emerged as a central part of that equation.

In order to bolster the early childhood education offerings in the Taos area, the Taos Municipal School District (TMSD) is working up a partnership with an Albuquerque-based nonprofit to create the Taos Early Childhood Academy.

TMSD has been developing the academy with Youth Development Inc. (YDI), which operates early childhood centers in Bernalillo and Rio Arriba counties, as well as Llano Quemado, Questa, San Cristóbal and Vadito.

The partnership puts to use classroom space the school district has on hand to devote to more students.

By pairing the district’s unused classroom space with the organizational infrastructure and programming of YDI, TMSD officials are hoping to further meet the need of early childhood education for Taos’ working families.

While final approval of the partnership is predicated on a June 28 decision of the Taos school board, the plan calls for 43 new spots for kids at Enos Garcia — eight children age birth to 3 and 35 pre-K students age 3 to 4 — according to TMSD Superintendent Dr. Lillian Torrez.

Arroyos del Norte, if approved, would have 20 slots available.

YDI is held to more stringent federal building requirements. As such, the partnership mandates tens of thousands of dollars’ worth of renovations to classrooms at both sites — funded by YDI.

Debra Baca, vice president of the early childhood division for YDI, told The Taos News that the partnership has been a decade in the making. Conversations about opening a more centrally located Head Start center were first floated when New Mexico representative Roberto “Bobby” Gonzales was TMSD superintendent, she said.

Head Start is a unique early childhood program because it takes a holistic approach “for the family, not just the child,” Baca said.

Head Start, which is federally funded and comes with eligibility requirements, is inclusive of students with disabilities and provides two-thirds of a kid’s daily nutritional requirements, Baca said. Beyond educating and caring for the physical, social and emotional well-being of children, the program also helps parents achieve “upward mobility,” she said, with a variety of job placement and career development opportunities.

The openings for students made available through YDI are neither the first, nor the only, early childhood offerings in the district.

[YDI] is a piece of the puzzle. This [partnership] will dovetail nicely with our [early childhood programs],” said Jim Ivanovich, TMSD director of special education.

“This is what the teachers and families wanted,” he said.

However, the full-day programs come with a sacrifice. It’s more hours per student, but fewer students overall, Ivanovich said. The district will eliminate its PED-funded pre-K at Arroyos del Norte and shift that load to the YDI.

At the same time, YDI will close its San Cristóbal location.

Baca told The Taos News no students from that center will be displaced and that all remaining students will have transportation to the new Arroyos site.

Torrez said almost every early childhood program in the area — from various district offerings to other state-funded and private programs — has a wait list, pointing to the need in the community. “They just come from everywhere the more we provide,” she said, adding she’s confident the YDI slots will be filled, as it is free for families.

Ivanovich acknowledged that while the YDI partnership is a meaningful step toward offering more early childhood education, “It’s still a drop in the bucket and doesn’t answer all the needs in the district.”

According to the Kids Count report, only 479 Taos County kids age 3 to 4, or 46.8 percent of all Taos County kids of that age, are enrolled in federally or state-backed programs or other licensed child care centers.

“Everybody has the same goal. But in order to get the money to do [early childhood education], we all have to jump through different hoops. These are different programs with different requirements and different people to report to,” he said.

Not only does the web of programs make it difficult for families to navigate their options, it makes it “very difficult” to maintain continuity during a child’s entry into – and development through – the public school system, he said.

Baca and TMSD officials are hoping that having YDI operate the Taos Early Childhood Academy at district-owned locations will concentrate services and therefore make them more readily available across different programs, classrooms and age ranges.

The partnership should “really smooth the transition for some of these kids,” Ivanovich said.