Download this report and its appendix (updated Feb 2013; 8 pages; pdf)

Since late 2007, New Mexico has been experiencing a dramatic business cycle downturn—one that has not been seen in the state’s recent economic history. In the two national recessions before the Great Recession (those in 1990-91 and 2000-01), New Mexico employment was relatively unscathed. In part, this was because New Mexico did not enjoy the employment booms in the preceding bubbles. In the Great Recession that started in December 2007, this was not so. The housing bubble that was at the heart of the 2001-2007 expansion had been good for New Mexico workers—particularly those in the construction industry and other job sectors that benefited from robust real estate sales. The collapse of that bubble exacted a terrible toll.

Programs like unemployment insurance (UI) act as a counter balance when unemployment rises and the economy goes south. They help keep consumer spending up while helping families pay their bills and put food on the table. UI payments to the newly unemployed had begun to rise in early 2008 and continued through 2011. As is typical, the balance of the UI Trust Fund—the ‘savings account’ for UI funds—began to decline. Normally, payments into the fund—made by employers—also rise automatically to keep pace with benefits paid out. In 2008-2012, however, payments into the fund dropped off precipitously, due in part to changes put in place by state lawmakers.

In 2011, UI benefits to students and displaced workers with dependent children were decreased. In effect, rate cuts for employers were provided on the backs of the unemployed and their children. This would be unfair during a healthy economy. It is unconscionable during a recession. As a result of the particularly deep recession and employer rate cuts, New Mexico’s UI Trust Fund is not healthy and is not likely to regain its fiscal health before the next recession, when it will again be stressed. 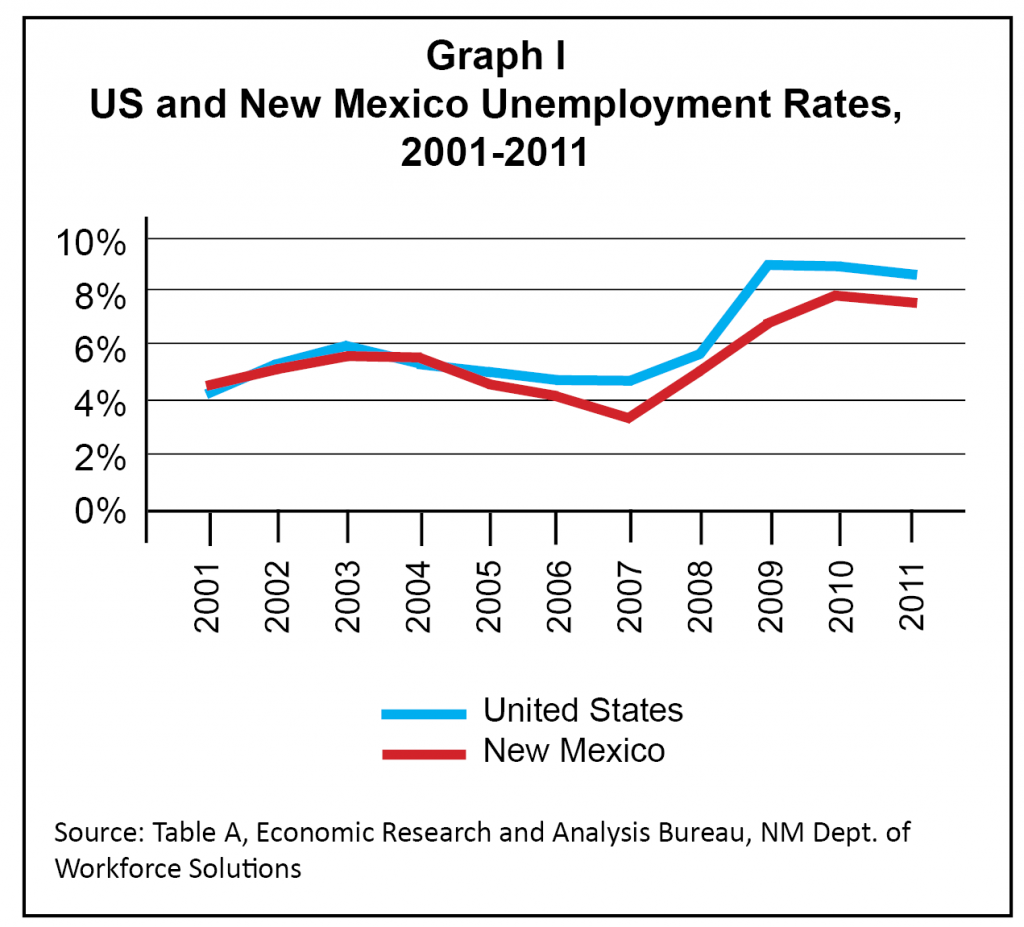 New Mexico’s unemployment insurance (UI) system carried out its primary function during the economic downturn that started in late 2007—the function of maintaining purchasing power in the economy when consumer spending is falling due to rising unemployment. Economists call unemployment insurance a ‘counter-cyclical’ program, meaning that UI payments offset the impact of rising unemployment. The loss of income associated with rising unemployment directly causes a decline in consumer spending and, indirectly, a decline in investor spending because machinery needed for producing consumer goods is also not needed. Unemployment insurance spending stimulates the economy because it is not directly funded by taxes—money that had already been circulating in the economy. That is because the source of benefits payments is in effect a savings account—the UI Trust Fund. During the recession, the savings from the UI Trust Fund are spent in the form of UI benefits paid to people who have lost their jobs. The Fund usually collects more than it pays during a robust economy and then pays out more than it receives during a downturn. 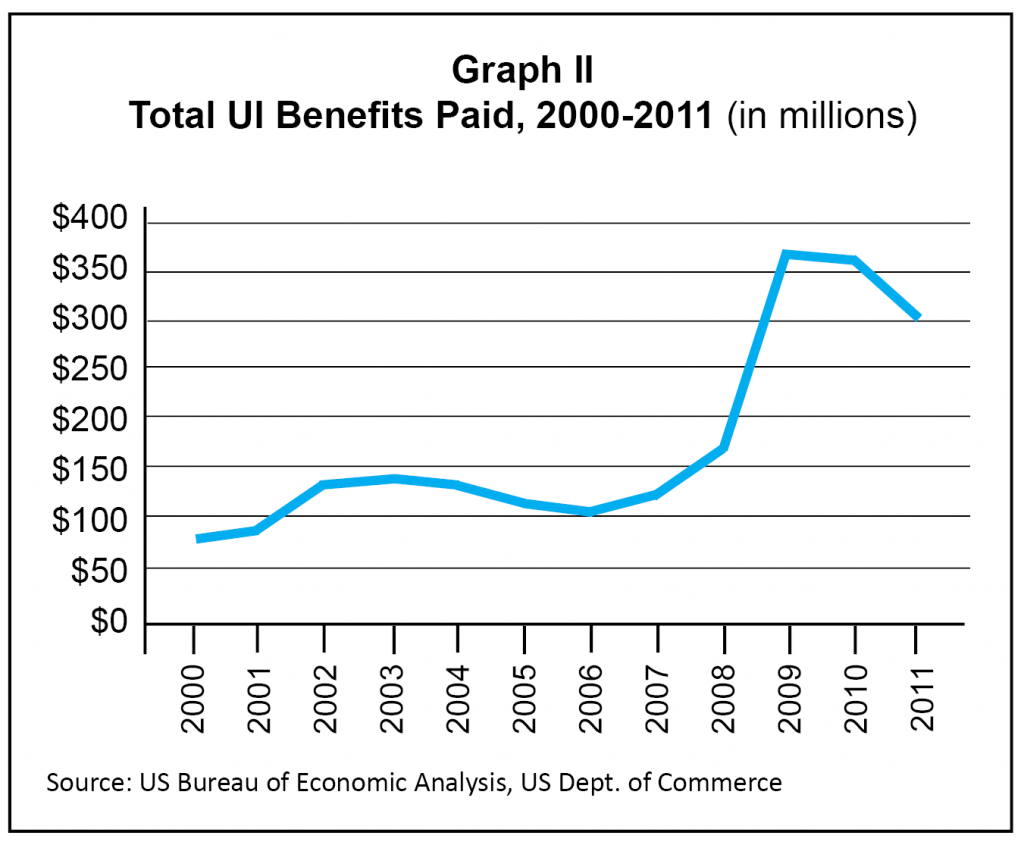 A state’s economic strength can be measured by its personal income. Graph III shows the behavior of personal income before and during the financial crisis that followed the collapse of the housing bubble. New Mexico personal income fell between 2008 and 2009, which is extremely unusual. As both earnings and unearned income (dividends, interest, and rent) fell, transfer receipts (payments such as UI and Social Security, Medicaid and Medicare benefits, and other assistance programs such as SNAP/food stamps) rose to take up some of the slack. But the graph indicates that transfer receipts, which are designed to rise more sharply during a crisis, failed to respond quickly enough to prevent a fall in personal income in the early part of the recession. 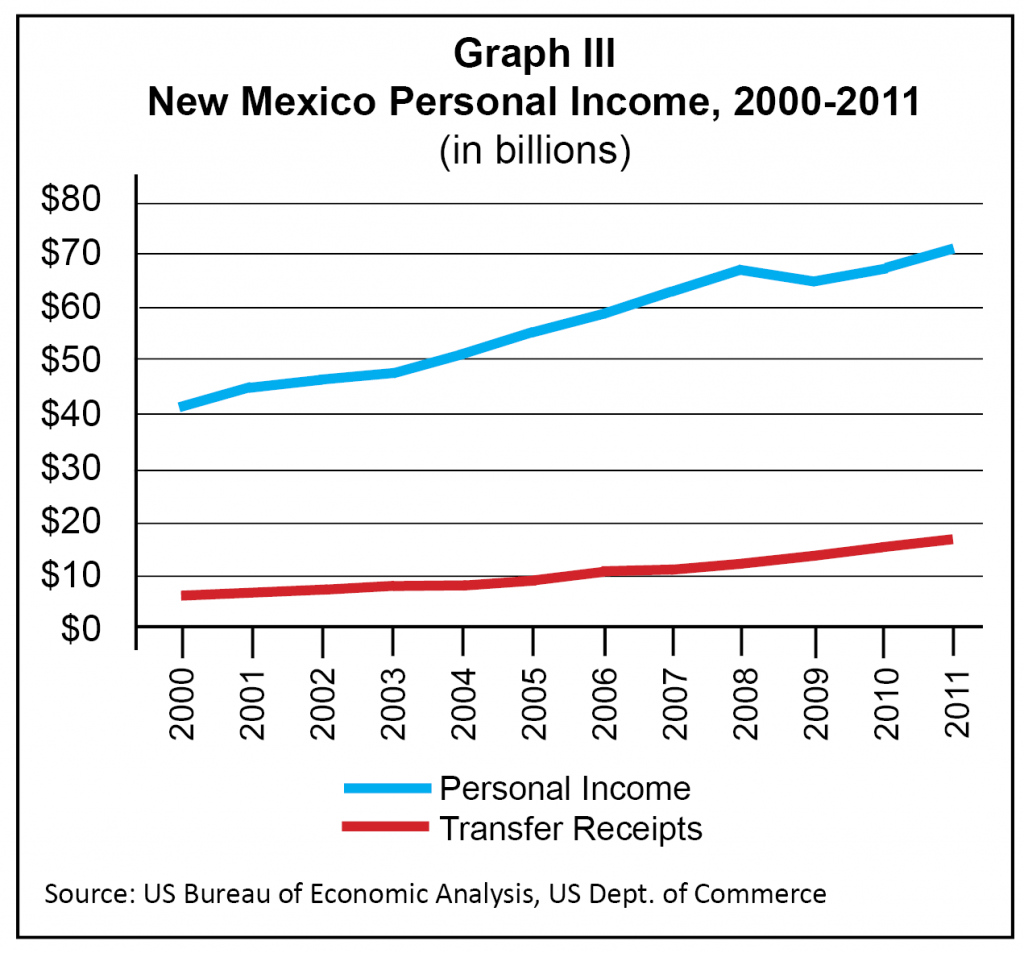 By 2010, substantial growth in transfer payments, combined with some growth in the other sources of income, was having the desired effect on the state’s economy. Total transfer receipts (including Social Security and health care benefits) went up by 50 percent between 2006 and 2010. The growth in UI payments was almost 700 percent, making it a much larger share of total transfer payments than before the recession. 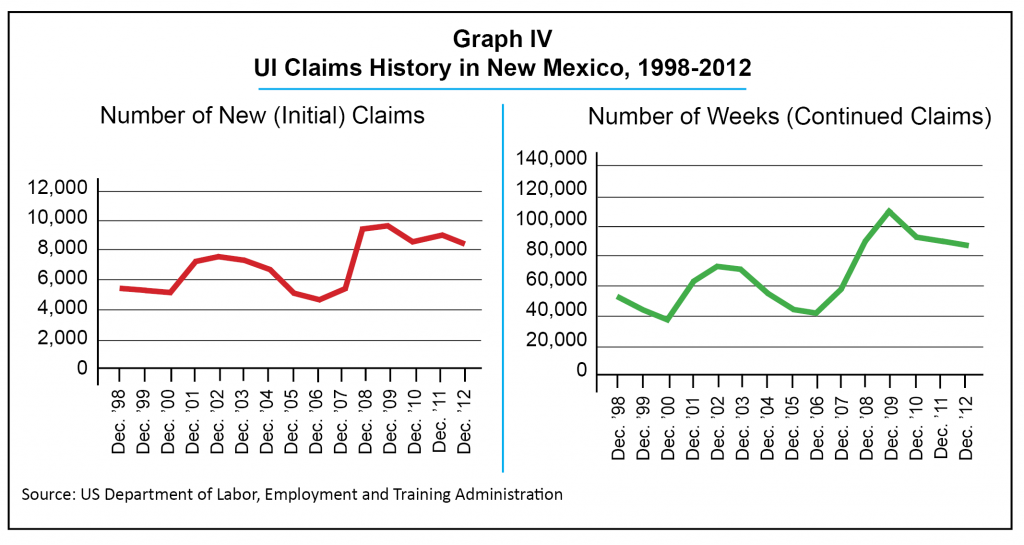 While initial claims peaked in January 2009, continued claims (the green line in Graph IV) did not peak until January 2010. This indicates that it took longer for the unemployed to find jobs during the Great Recession than it did during the recession caused by the collapse of the so-called dot-com bubble. This is a sign of an anemic recovery.

When considering the UI system, it is helpful to look at some of the demographic characteristics of its beneficiaries. This gives us a more complete picture of how the Great Recession has impacted New Mexico workers—particularly those with families. Chart I shows plainly how the construction industry took the brunt of the job losses following the bursting of the housing bubble. The pre-recession growth in construction jobs—the result of a housing construction binge—was unsustainable. Former construction workers represented the largest share of UI beneficiaries, followed by unemployed workers from the health care and education sectors (which the US Department of Labor groups together as ‘health care and social assistance,’ as shown in Chart I). A significant share of UI beneficiaries could also be found in retail trade, manufacturing, and administrative support. 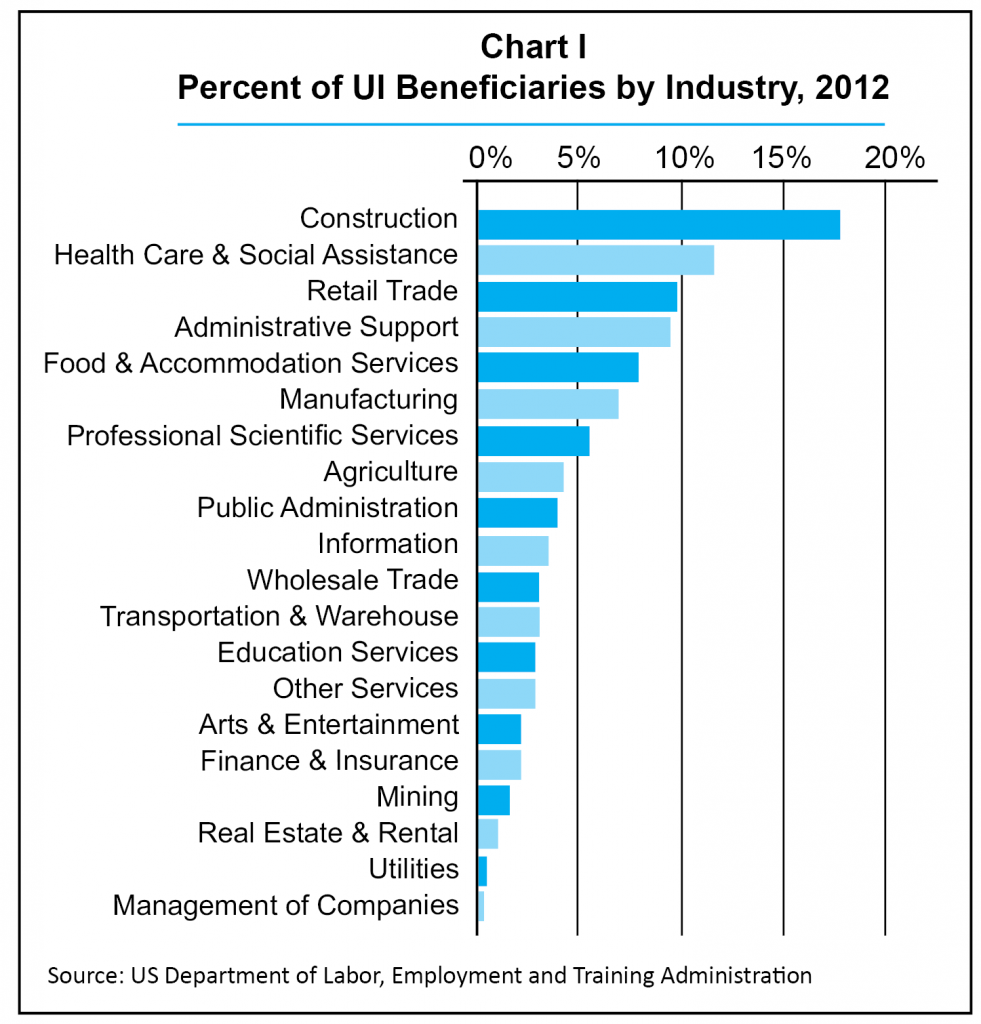 As construction workers are overwhelmingly young men—and in New Mexico, also Hispanic—the next two charts show a correlation with Chart I. As Chart II indicates, the largest percentage of UI beneficiaries fell in the 25 to 34 age group—The age group most likely to have young children. Those between 35 and 54—considered the prime earning years—were also greatly impacted by job losses. 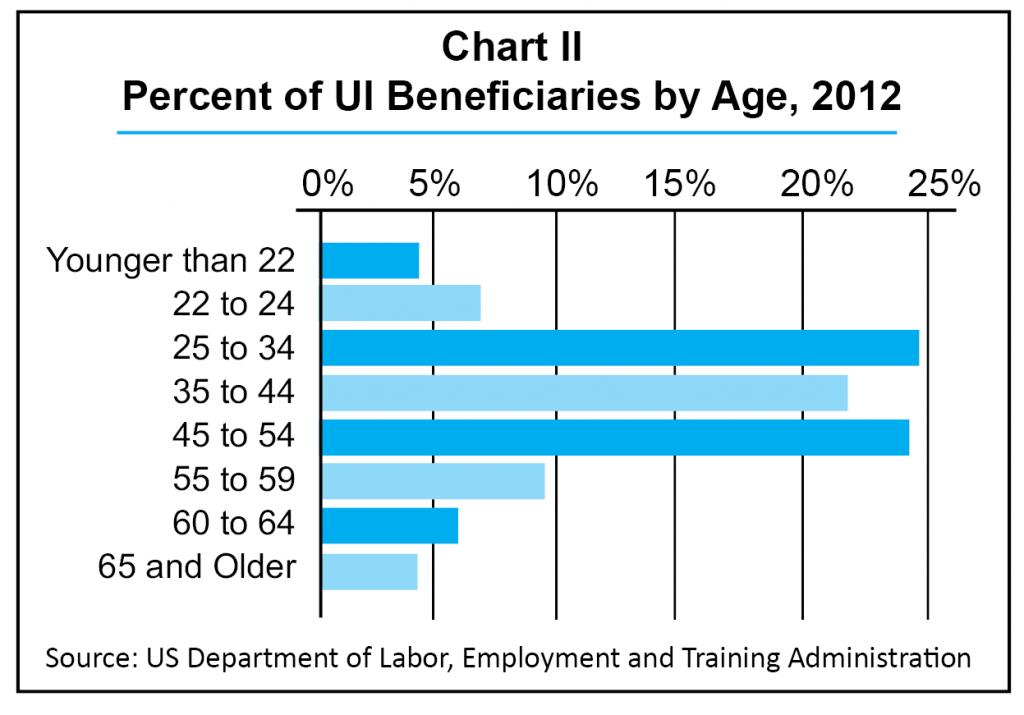 More than half of the insured unemployed were Hispanic (see Chart III) and non-Hispanic Whites were about 42 percent. Because of their prevalence in the construction industry, Hispanics were not only disproportionately impacted by job losses, but also disproportionately assisted by the UI program. That smaller percentages of Native Americans, Blacks, and Asians were UI beneficiaries is most likely due to the fact that they are not employed in large numbers in the sectors that had the highest job losses.

Finally, men were about 60 percent of UI beneficiaries while women were 40 percent. 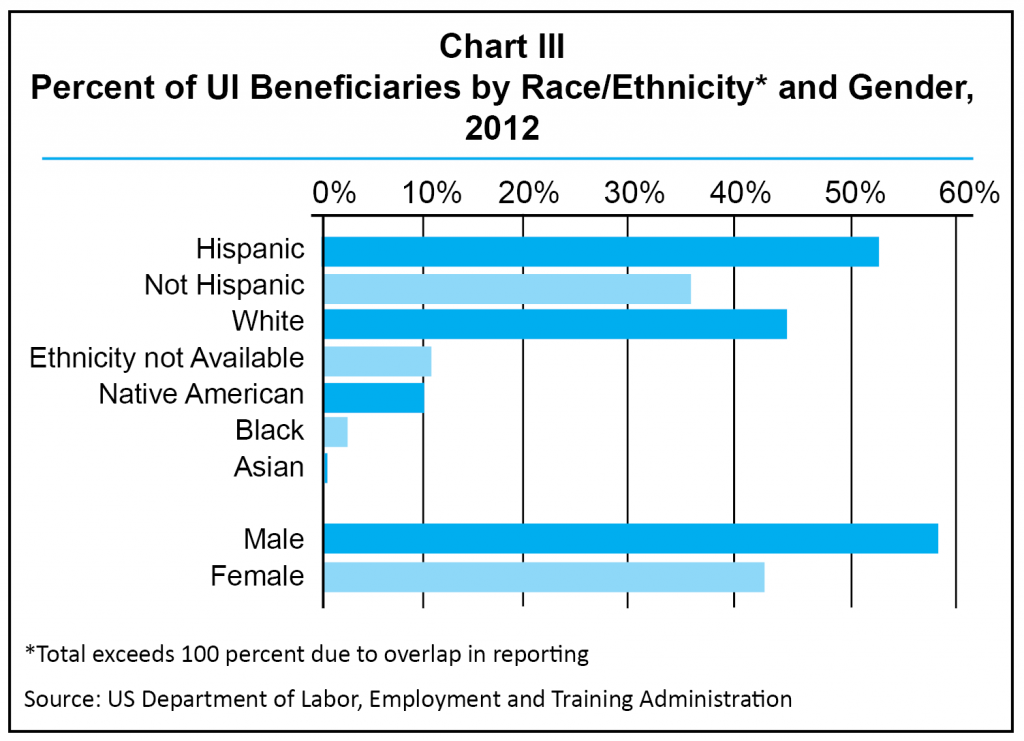 The New Mexico UI Trust Fund, which is held for states by the US Department of Labor, is the amount available for payment of UI benefits. The UI program takes in revenues in the form of levies on employers and spends the revenues as benefits for qualifying unemployed workers. Although UI claims and payments have slowed since the peak of the recession, benefits paid for both initial and continued claims are still exceeding revenues from employer taxes. As illustrated in Graph V, starting in 2008 benefits paid (the red line) far exceeded revenues received (green line). The depletion of the UI Trust Fund is expected during a recession, although the depth of the Great Recession in New Mexico was not anticipated by experts on the state’s economy. However, as benefit payments decline, the balance (blue line) should begin to recover. Graph V shows that is not happening. 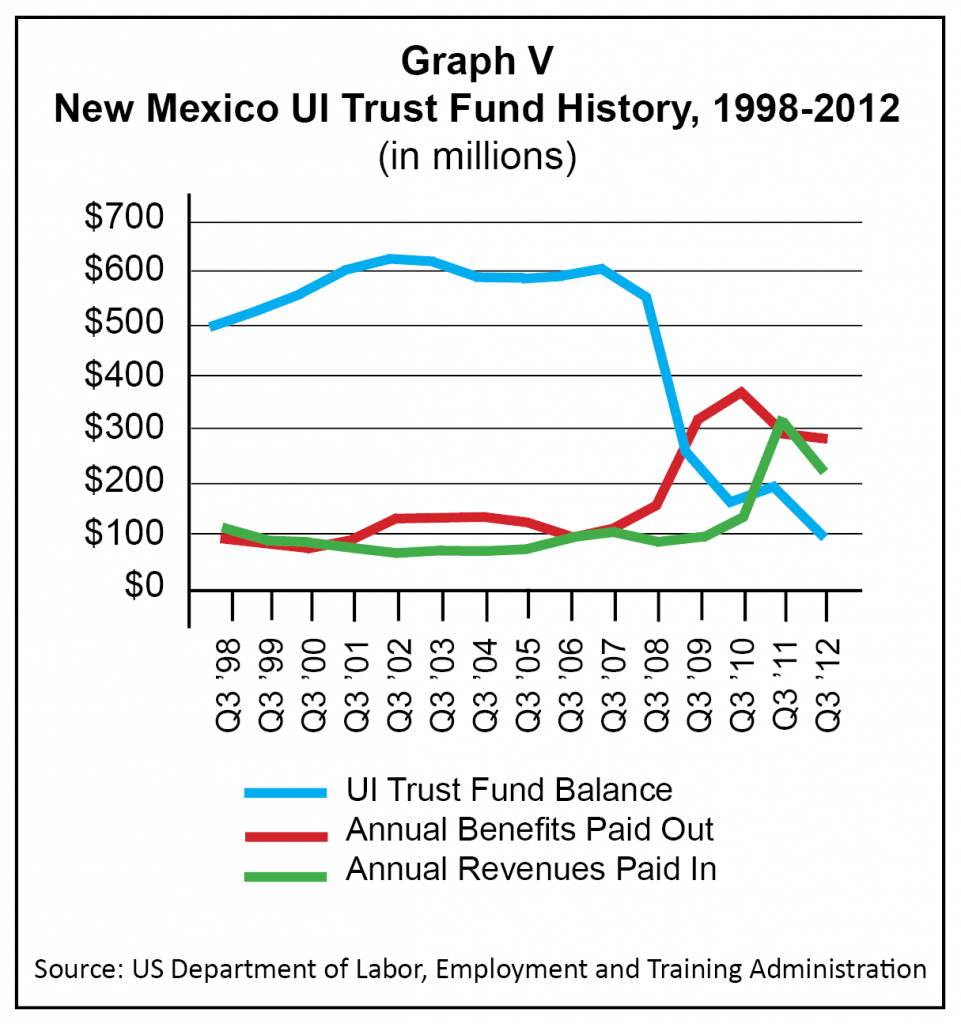 In 2003, the state Legislature made several changes to the UI system, including increased benefits for bread-winners with dependent children and a lower insurance rate for employers. (For a more complete history of changes to New Mexico’s UI system from 2003 to the present, see the Appendix.) Since employer payments are a percentage of their payroll, they decline during a recession as workers are laid off. To counteract that—and to keep the Trust Fund solvent—New Mexico’s UI statute had a built-in method for increasing taxes when wages fall. These automatic increases, which would have helped keep the UI Trust Fund balance from dropping so dangerously low, were overridden by the Legislature during the 2003-2012 period.

There is a need for action on rebuilding the UI Trust Fund as the recovery from the recession continues so it will be available when the next recession—and its ensuing wave of unemployment—hits. The solution to the depletion of the UI Trust Fund is to increase employer contributions, not to cut UI benefits. Some of the worker- and family-friendly reforms implemented over the past ten years, such as the benefit allowance, are still in effect (though reduced) and some—UI benefits for students, for instance—have been repealed. Meanwhile, employer contributions have been kept artificially low, even during the worst of the recession.

Cuts to benefits during a recession hurt more than workers and their families. They also slow the recovery, which impacts everyone—employers included. Had the UI statute’s method for increasing employer payments been kept in place, the fund would not be in such a dire condition. Moreover, the experience of the past ten years has shown that even a seemingly large UI Trust Fund balance (it was nearly $600 million in 2003) can be inadequate to pay full benefits in a severe recession. Clearly, the UI Trust Fund balance should be higher—possibly as high as $1 billion. State lawmakers should allow the statute to work as it was intended so employer tax rates can return to where they should be at this point in the recovery.