The State of Working New Mexico 2013 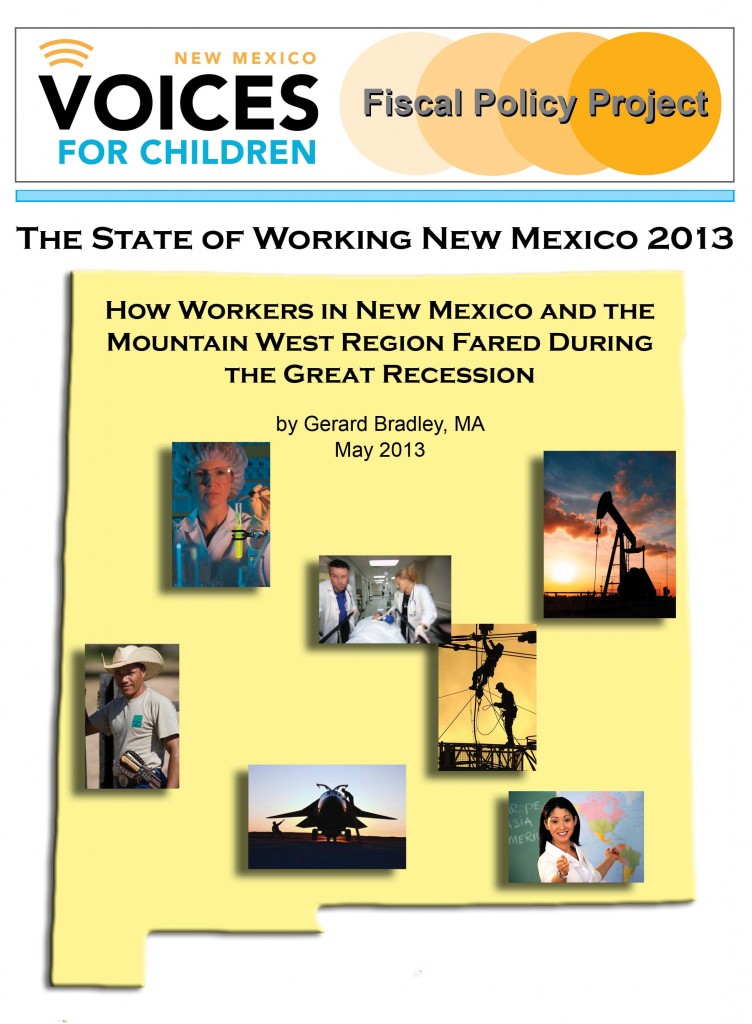 New Mexico workers have endured turbulent times since the start of the Great Recession, and the state’s economy is still struggling to recover. New Mexico has lost nearly 43,000 jobs since the recession began in December 2007, but our jobs deficit is more than double that number. A jobs deficit is the difference between actual employment and the level of employment we should have when population and labor-force growth are taken into account. New Mexico should have added 58,300 jobs since the recession began to accommodate population growth. Adding the 58,300 needed jobs to the 42,700 lost jobs yields a deficit of 101,000 jobs. That’s more than the population of Las Cruces.

The recession was caused by the bursting of the housing bubble after several years of unsustainable growth in housing prices along with predatory mortgage lending and deceptive stock trading practices. The burst caused a collapse in construction and other housing-related employment. New Mexico’s construction sector experienced the worst job-loss percentage of any sector—losing more than 30 percent of its jobs since December 2007. Nationally, construction employment fell by 23.4 percent and the sector has begun to rebound, adding jobs over the last six months. Construction job growth in New Mexico still had not yet begun to turn around in January 2013.

When workers suffer, so do their children. The effects of adverse childhood events such as those brought on by the recession—loss of family income, food insecurity, poverty, and even homelessness—last a lifetime and can impede children from reaching their full potential and becoming contributing members of society. It is in the state’s best interest to minimize adverse childhood events, and this can be done by ensuring that vulnerable families have support systems they can utilize, particularly in tough financial times.

The State of Working New Mexico 2013 examines patterns in employment and wages, and shows that income inequality and poverty are, in essence, problems of the labor market, and will not be solved until the underlying problems of unemployment, underemployment, and low wages are addressed. Public policy solutions to these problems exist and should be enacted by state leaders.

1.) Maximize capital outlay funding to create jobs in the construction sector.
2.) Fully implement the Affordable Care Act in the state. This means a robust implementation of the Medicaid expansion and setting up an effective, consumer-friendly insurance exchange. This will not only improve the health of workers, but could create up to 30,000 jobs per year.
3.) Rebuild the state budget, which has suffered from deep cuts over the last several years. These budget cuts have led to job losses. New revenue should be reinvested in the state in the form of spending on education, public safety, health care, and other public services rather than given away as corporate tax breaks with no performance accountability and that may not create any jobs.
4.) Improve workforce education levels by investing in education from cradle to career. This means fully funding early care and education for children from birth to age five to improve K-12 outcomes, and increasing investments in adult basic education and job-training programs such as JTIP. On the federal level, Congress should take steps toward enacting President Obama’s pre-school initiative.
5.) Stop the erosion of the unemployment insurance recipiency rate for the unemployed and their dependents.
6.) Increase the state’s minimum wage to $8.50 and index it to inflation.
7.) Increase the Working Families Tax Credit to put more money in the hands of low-income workers.
8.) Make the Lottery Scholarship need-based so the limited funds can go to those who most need them.