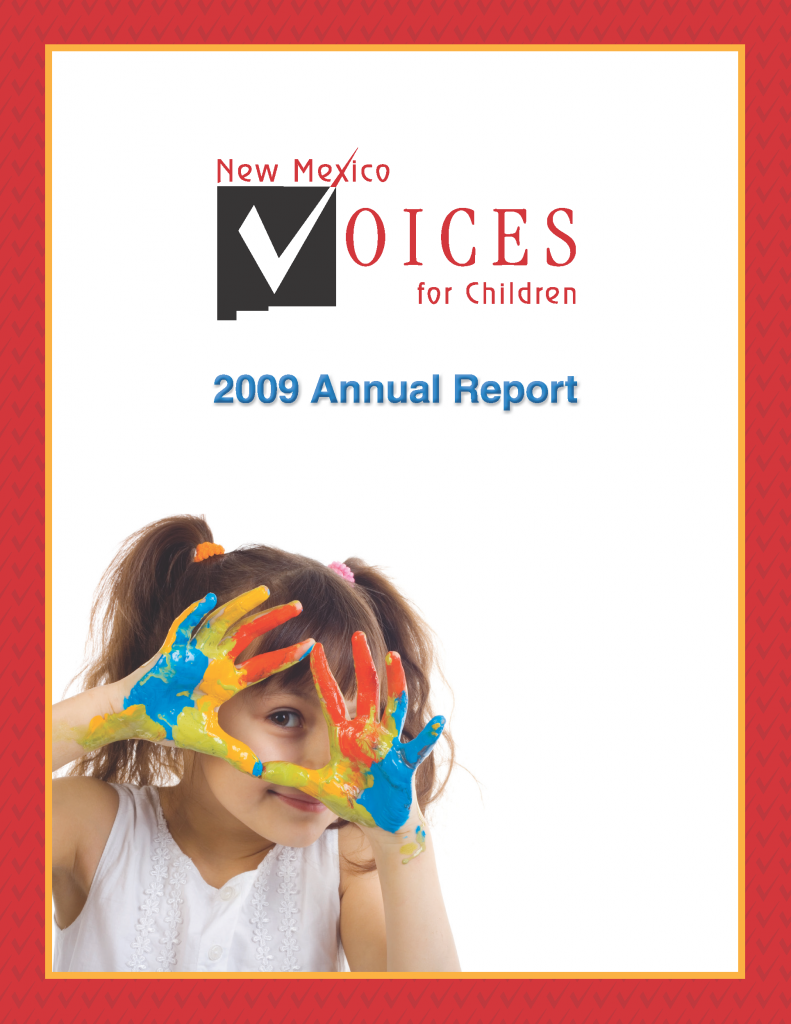 Fiscal year 2009 began with something we won’t see again, perhaps for many years: a surplus in the state budget. With gas and oil prices at an all-time high, the state was flush with money in the summer of 2008. Eager to give it away, Governor Bill Richardson called a special session in August. As always, NM Voices for Children advocated for that funding to be reinvested in the state’s most vulnerable residents—its children. To that end, we fought for some of the following wins:

With the budget surplus of 2008 still a fresh memory, New Mexico bumped up hard against reality at the dawn of 2009 as state revenues began to decline. The Legislature had to tackle a fairly modest (in hindsight) revenue shortfall in the regular session of 2009. We worked toward these wins for New Mexico families:

We released several reports through our research arm, the New Mexico Fiscal Policy Project, during fiscal year 2009. We use these publications to educate policymakers, the news media, and others about some of the economic challenges New Mexico’s children and working families are facing, as well as to offer policy solutions that would improve child well-being. Those reports include:

We also published several reports through our NM KIDS COUNT program. KIDS COUNT, a national network led and funded by the Annie E. Casey Foundation, identifies and tracks indicators of child well-being. These data show where the state is both taking good care of and failing its children. We publish a comprehensive annual report on the status of children in New Mexico, as well as several special reports. Some highlights include:

The event during our 2009 fiscal year that will be remembered longest was the historic election that installed the first African American in the White House. As a 501(c)3 organization, New Mexico Voices for Children (NM Voices) can only participate in electoral advocacy in specific ways—namely educating voters and candidates about issues of importance to working families and encouraging voters to exercise their most precious right by going to the polls. Still, we were thrilled to witness a sea change in Washington toward a more progressive administration.

As part of our electoral work we partnered with Every Child Matters Education Fund (ECM) and together created Every Child Matters New Mexico. Like NM Voices, ECM believes that early childhood care and education programs are extremely important to a child’s future success. Our mutual goal was to get children’s issues on the electoral radar.

To that end we participated in the September 2008 Step Up for Kids Day by helping to host a congressional candidate forum and creating ballots and a ballot box so kids could cast their own vote for president and their favorite flavor of ice cream (Barak Obama and chocolate were the big winners). We also created and disseminated A New Mexico Citizen’s Guide to Children’s Issues, which took a big-picture look at some of the issues negatively affecting children such as poverty, lack of health care, racial disparities, and the country’s prison system.

Launched in 1994, our longest-running program—Youth Link—is still going strong in FY09. It trains middle- and high school students in public policy advocacy and the legislative process using the tangible issue of preventing tobacco use among peers. It works with existing youth groups across the state through the YEAH! Coalition (Youth Empowerment Advocacy Heroes). In FY09 between 200 and 300 youths were involved in Youth Link activities, including the annual Fame & Shame awards event.

Fiscal year 2009 was the final year of two grants that funded our Santa Fe Community Partnership program. The multi-year grants—Drug Free Communities Support Program and Communities Empowering Youth (CEY)—were both initiatives of the U.S. Department of Health and Human Services. The former funded community building, and coalition- and task-force work around improving access to health care, particularly substance abuse prevention among youths, among other things.

Through the CEY grant, we helped several youth-serving Santa Fe-area nonprofits to build internal capacity through leadership, organization and program development, and community engagement training. Capacity building helped the organizations to align their work within the community and to be more self-sustaining.

Our 15th Annual Amy Biehl Youth Spirit Awards ceremony was a theater-style event held in December 2008 at the KiMo. The keynote speaker was Amy Costello, an Emmy-nominated television and radio reporter. She gave a heart-felt talk challenging the youth to move out of their comfort zone as they worked to make the world a better place. We had a total of 28 nominees from across the state, each recognized for the community service and volunteer work they had done—in either their communities or around the globe. The award honors Amy Biehl, a graduate of Santa Fe High School, who was killed in a race riot while working to end apartheid in South Africa. Amy’s mother, Linda Biehl, was also in attendance. We received excellent television, radio and print news coverage.

On tax day 2009, groups of anti-government activists, dubbed Tea Partiers after the Boston Tea Party, rallied in protest of paying federal income taxes. As a kind of counter argument, NM Voices staged our own Tax Day Rally, but with a decidedly different message—one of tax fairness. Our rally called for the state of New Mexico to close a loophole that allows out-of-state corporations to skip out on paying income taxes on the profits they make doing business here. We also called for a more transparent tax system—one that tracks the billions we give away every year in tax credits, exemptions and deductions so this spending can be scrutinized in the annual budgeting process.

Youth Link, along with the New Mexico Media Literacy Project, hosted their 5th Annual Fame & Shame Awards ceremony in May 2009. Held at the historic KiMo Theatre in Downtown Albuquerque, the Oscar-style event is a creation of the hundreds of youths around the state who work to educate their peers about the harmful effects of using tobacco products. The red-carpet event shames Hollywood for its portrayal of smoking in youth-rated movies (G, PG, and PG-13) by presenting actors and directors with “Shamie” awards. The award statuette—a bucket of popcorn littered with cigarette butts—isn’t meant to be as prestigious as the little gold guys that the Motion Picture Association gives out. The event also honors the winners of the Youth Advocate of the Year Awards—middle and high school students—for their exemplary anti-tobacco work. Some youths dress as Hollywood actors to accept the Shamie awards and some put on their best glitz for this fun event.

Because we are an advocacy group, the work we do for New Mexico’s children and families isn’t always easy to quantify. We can’t tell you how many kids were fed, slept in warm beds, or got better grades in school as a result of the legislation we helped pass. But the work we do regarding the state’s tax and budget systems does have a very real impact, and you don’t even have to take our word for it.

The National Committee for Responsive Philanthropy (NCRP) took a look at the work that 14 New Mexico advocacy groups—including NM Voices—have done over the last several years. The resulting report, Strengthening Democracy, Increasing Opportunities, released in December 2008, concludes that every dollar invested in our advocacy work reaps more than $157 in benefits for New Mexico’s children and working families. That’s an excellent return on investment!

Among the benefits cited in the report are reforms to unemployment insurance, the minimum wage increase, and the creation of the Working Families Tax Credit, which is a state-level Earned Income Tax Credit that lifts thousands of families out of poverty every year. The NCRP report also reveals the progress of these initiatives: