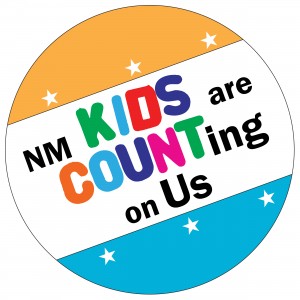 NM KIDS are COUNTing on Us: A Campaign for a Better New Mexico

New Mexico has long ranked at or near the bottom for child well-being in the Annie E. Casey Foundation’s KIDS COUNT rankings. But even when New Mexico dropped to 50th in the nation in 2013, the lack of a concerted response from our lawmakers was discouraging. NM Voices for Children, with input from our many partners and ally organizations, created the NM KIDS are COUNTing on Us: A Campaign for a Better New Mexico a policy agenda to put New Mexico’s kids first. (Link to the campaign.)

How can you help make New Mexico’s kids the state’s top priority?

Yes! I want to be a Citizen Co-Sponsor!

About Being a Citizen Co-Sponsor

As a Citizen Co-Sponsor you are pledging that:

When a report ranked New Mexico dead last for business taxes, the Legislature was swift to act, passing a bill full of tax breaks worth hundreds of millions of dollars for profitable corporations in 2013. In fact, corporate well-being has been a big concern in several recent legislative sessions. Later that same year, the national KIDS COUNT Data Book ranked the state dead last for child well-being. But not one elected official has brought forth a plan to improve outcomes for our children. While some progress has been made—funding has been significantly increased for some early childhood care and education services, more child protective case workers have been hired, and some 30,000 children have been enrolled in Medicaid in recent months—child poverty remains unacceptably high.

Our NM KIDS are COUNTing on Us: A Campaign for a Better New Mexico is a starting point for lawmakers; a framework upon which they can launch a systematic effort to reduce child poverty and improve outcomes for our children.

If our state can afford hundreds of millions of dollars in tax cuts for corporations, it can afford to increase its investments in our children.

We need your help in convincing lawmakers to put our children first!

You can also support this work by making a donation. Thank you!